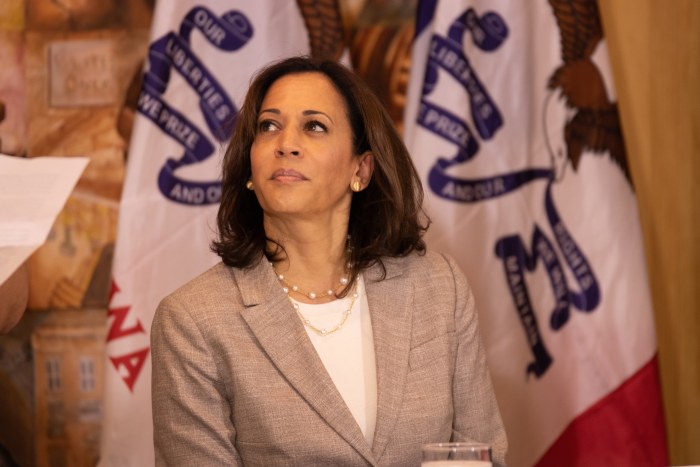 Elizabeth Behre is a wife, mother, transgender woman, and medical student in Des Moines. She submitted this post with the subtitle, “An open letter to a presidential candidate who completely missed the mark when trying to atone for past sins.” -promoted by Laura Belin

I’m not sure you realize this, which is both worrisome and a little bit scary, but you still owe the transgender community an apology.

Confused as to why? Well please, let me explain.

While the attorney general of California, your office fought to keep Michelle Norsworthy, a transgender woman incarcerated in the California State Prison System, from receiving a medically necessary surgery she desperately needed to treat her gender dysphoria. Your office paid an “expert” to explain to the court why the surgery was unnecessary, and then continued to waste taxpayer dollars on appeals even though she was able to obtain this surgery through California’s Medicaid program after being granted parole.

This wasn’t the dark ages either. It happened in 2015.

I know you claim you were “obligated” to do this by the nature of your job. Frankly, I just don’t believe that. You were one of the most powerful lawyers in the United States at the time, not a recently graduated intern in the nascent stages of her career. At the very least you could have protested, diverted resources, and let your opposition be known publicly if you didn’t like what your office was doing. Unfortunately, that isn’t what happened.

To make matters worse, it appears as though you still believe what happened was okay.
Just a day after announcing your bid for the White House, you said you took “full responsibility” for this rash of bad decisions. Then, when asked if you feel trans inmates should have access to gender confirmation surgery, you responded with this:

“I believe that we are at a point where we have got to stop vilifying people based on sexual orientation and gender identity, and we’ve got to understand that when we are talking about a particular transgender community, for too long they have been the subject of bias, and frankly, a lack of understanding about their circumstance and their physical needs in addition to any other needs they have, and it’s about time that we have a better understanding of that.”

The subtext here makes you sound like a candidate interested in making a calculated political move to get the transgender community off your back. Not like a public servant from a diverse state who can use her knowledge to build a better America for all its marginalized communities.

It’s 2019, Senator, and a response that says little more than “My bad, we should all stop being mean to transgender people and also understand them better,” simply isn’t good enough. Not when we can still be fired in 26 states simply for being ourselves, not when we’re starting GoFundMe pages and accumulating thousands of dollars in debt to afford the healthcare necessary to survive our gender dysphoria, not when our youth are being kicked out of their homes and forced to endure hostile learning environments, not when transgender people are being murdered constantly, and not when we’re being rejected by our families, deadnamed and misgendered incessantly, and fighting continuously to get the same basic human respect our cisgender neighbors take for granted.

We, and I’m talking about all minorities now, live in the shadow of Pulse, the shadow of Tree of Life, the shadow of El Paso, and the shadow of hatred, prejudice, and bigotry that are all unprecedented for our time. More than anything, we need a voice that can recognize and fight this with the power only the White House can provide.

That is exactly why your poll numbers went up after you called out Joe Biden during the first democratic debate. You knew exactly how Black children had been marginalized, exactly how the federal government failed to fix it, and exactly what should have been done instead. We need to see this kind of knowledge in our next president, but that understanding should extend to all our marginalized populations. Too many of us have suffered too much and too long for anything less to be acceptable.

To borrow your words from the first democratic debate, your actions have been both “personal” and “hurtful” to me as a transgender person, but that doesn’t mean you can’t be better. A real apology for the harm you caused is a great place to start, and then it’s time to start making that understanding, with all our marginalized communities, become a reality.

If you’re not sure where to begin, I live in Iowa right now, and I would love to talk with you.

Editor’s note from Laura Belin: Prior to publishing this commentary, Bleeding Heartland reached out to the Harris campaign, which provided the following comment on September 16.

“Senator Harris has worked to give the transgender community the dignity they deserve for her entire career, including as district attorney leading efforts to get rid of the gay and trans panic defense and as attorney general helping make California the first state to outlaw the defense. As attorney general, her office had the constitutional responsibility to represent the California Department of Corrections. She worked behind the scenes to make permanent changes in state prison policy on the treatment of transgender inmates, which has been praised by LGBTQ rights advocates, and she believes everyone deserves access to compassionate and comprehensive care.”

In June, Bleeding Heartland asked all of the Democratic presidential campaigns about their stance on Medicaid coverage for gender-affirming surgery, in the context of a Republican-backed, discriminatory state law that the ACLU of Iowa is challenging on behalf of two transgender Iowans and the advocacy organization One Iowa. At that time, the Harris campaign provided this statement:

“The Affordable Care Act is the law of the land, and it protects transgender people from discrimination in health care. Health insurance plans in Iowa and across the nation – including Medicaid and other government-sponsored programs – should ensure that transgender people are able to access the health care they need. As president, I will fight to preserve and expand these protections,” U.S. Senator Kamala Harris said.