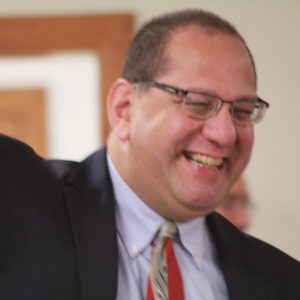 Jon Neiderbach, the 2014 Democratic candidate for state auditor, plans to announce a campaign for governor by the end of the week, he confirmed to Bleeding Heartland. A New York native who has lived in Iowa since attending Grinnell College during the 1970s, Neiderbach has in-depth knowledge of state government, having worked for the Legislative Fiscal Bureau and later in the Iowa Department of Human Services. He also served a term on the Des Moines School Board and has been an attorney in private practice since 2012. He campaigned for a few months in Iowa House district 43 during the last election cycle but withdrew from that race before the filing period.

Last year, Neiderbach was an active supporter of Bernie Sanders for president, and he will need support from that part of the Democratic base in a primary likely to include better-funded candidates. His new Twitter handle is @Neiderbach4Gov, and he's on Facebook here. A campaign website will launch soon. I enclose below a short bio released during Neiderbach's 2014 race for state auditor.

The field of Democratic challengers to future Governor Kim Reynolds will expand further. Rich Leopold is already campaigning around the state, and former Iowa Democratic Party chair Andy McGuire is expected to make her candidacy official within a month or two. (However, when I asked McGuire at the recent State Central Committee meeting when she was going to announce, the mother of seven grown children answered with a joke: "Oh, do I look pregnant?")

State Senator Liz Mathis told a Democratic gathering in Des Moines this month that she thought about running for governor in 2018, "but I don’t believe it’s in the cards for me." I've talked to several Democrats who hope she will reconsider, including AFSCME President Danny Homan. (He is not in McGuire's fan club.) Terry Branstad ruled out running for governor in May 2009 but changed his mind a few months later.

Background on Jon Neiderbach, taken from his 2014 state auditor campaign:

Jon Neiderbach graduated from Grinnell College in 1978 and from law school at the University of Oregon in 1981. Jon worked for the Legislative Fiscal Bureau (now known as the Legislative Services Agency) from 1981 to 1996, and for the Iowa Department of Human Services from 1997 to 2012. In 2000 Jon was elected to the Des Moines School Board, and he was Board President during 2003-2004. He has been active in PTA and neighborhood associations, and he has served on the boards of several non-profits. Jon’s wife Mary is a planner with the City of Des Moines.