The Des Moines metro area has received top-ten rankings from dozens of national organizations or publications that evaluate the job climate, housing markets, or other factors affecting the quality of life.

Unfortunately, extensive research on the State of Black Polk County revealed "significant racial disparities in the traditional economic and financial indicators including banking, savings, employment, and housing." The Directors Council and State Public Policy Group coordinated the yearlong project, producing the first-ever "snapshot of the financial stability and well-being of African Americans and Africans living in Polk County." Iowa's largest county is home to more than 31,000 black people, a little less than 30 percent of the estimated statewide African-American population.

I first learned of this study, now nearly six months old, when Teree Caldwell-Johnson presented key findings to congregants at Temple B'nai Jeshurun in Des Moines during a break between Yom Kippur services on September 30. The full report is after the jump. For each portion, I've highlighted the facts and figures that most struck me.

These numbers partially explain why analysts for 24/7 Wall Street ranked the Des Moines metro area the country's ninth-worst city for black people in 2015 and the third-worst last year.

On a related note: The Fifth Annual Iowa Summit on Justice and Disparities, co-sponsored by the NAACP, is happening in Ankeny next Tuesday, October 10. More details are here and near the end of this post.

In addition to collecting demographic and economic statistics, researchers discussed the relevant issues with nearly 250 community members over more than 60 meetings. You can download the full 73-page report here.

The first section seeks to answer the question, "Who is Black Polk County?" The next section examines seven "traditional economic and financial indicators" and two other measures of economic well-being. The final section analyzes racial disparities in four other areas: education, public policy leadership, the justice system, and health care.

Caldwell-Johnson spent quite a bit of her September 30 presentation discussing the African-American community's limited access to banking. In the city of Des Moines, 24 percent of black residents are "unbanked," meaning they do not have "a traditional checking or savings account." An additional 34 percent are "underbanked," meaning that "despite having a mainstream checking or savings account, one uses alternative banking services, such as payday-lending at high interest rates." Only about 4.5 percent of Iowa adults are unbanked and 14.4 percent underbanked.

Iowa Democrats had a chance to enact payday lending reform when the party controlled both chambers of the Iowa legislature and the governor's office. In a monumental failure of political will, House leaders allowed a conservadem to kill a good bill in subcommittee during the 2010 session, instead of attaching the regulations to some must-pass legislation. Thousands of Iowans are still trapped in cycles of debt because a few lawmakers let industry lobbyists win the day.

Without basic checking and savings accounts, traditional pathways to building wealth are closed. The researchers looked at 120,047 applications in Polk County between 2010 and 2013 "for loans that fall under the Home Mortgage Disclosure Act" (mostly home mortgages, refinancing a mortgage, or a home equity loan for a planned renovation). Lenders denied 24.15 percent of the applications from African Americans. That's more than twice as high as the overall Polk County denial rate of 11.3 percent.

This "Tale of Two Cities" graphic appeared on the back page of the executive summary Caldwell-Johnson passed out on September 30. 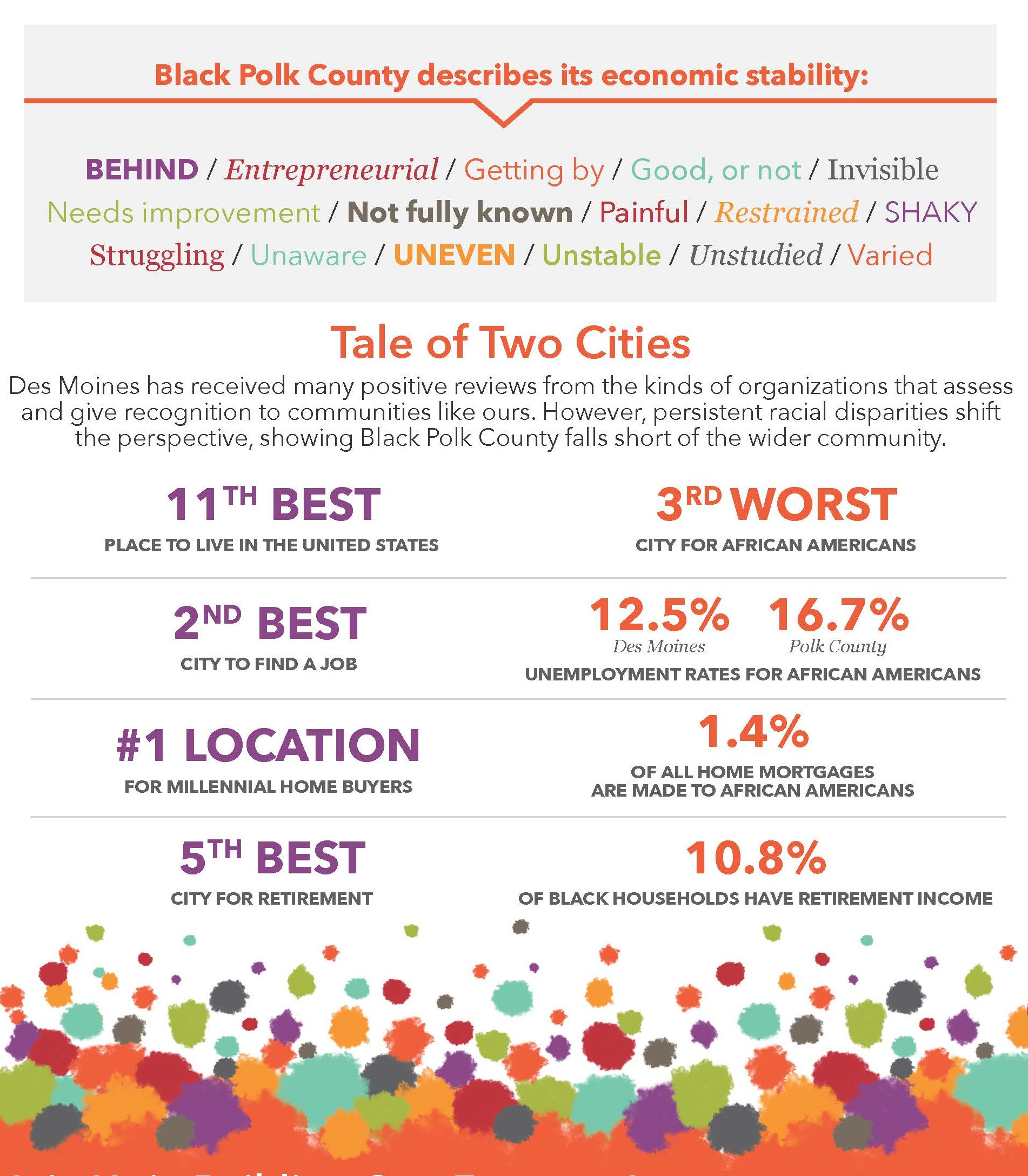 Caldwell-Johnson had noted that most black residents of Des Moines (more than 22,000 people) live in ten census tracts commonly known as the "urban core." I asked her why unemployment appears to be higher among black people in suburbs or small Polk County towns than in the urban core. She had not seen any hard data explaining the phenomenon. Her theory was that many people moved to places like Grimes, Johnston, West Des Moines, or Urbandale, thinking they would find better job opportunities and housing. (The report found "Between 2000 and 2012, there was a 15 percent decrease in jobs in high-poverty areas. However, there was a 9 percent increase in jobs in the Des Moines suburbs.")

Once settled in those suburbs, African Americans often lacked reliable transportation to commute to the available jobs, Caldwell-Johnson theorized. In many cases, they ended up isolated from community organizations providing support. Some eventually moved back into the urban core.

Only "3.6 percent of Black households have self-employment income compared to 9.4 percent of total Polk County households," the researchers found. Being "unbanked" or "underbanked" closes doors to the kind of loans that Americans have used for decades to start small businesses.

Large "disparities in home ownership and rental statistics suggest systemic obstacles are in place for African American home ownership in Polk County," according to the report. One figure particularly struck me: "In 2010, the median value of single-family homes in minority Census tracts was $70,000, less than half the Polk County median value of $140,600." A home is the largest single asset for most Americans who own one, as well as a critical path to building family wealth.

Despite "limited transportation data disaggregated by race for Polk County," researchers identified some important correlations. For instance, census tracts with more African-American residents "will likely have a greater number of households without a car" and more people "commuting to work on foot or by public transit." Even the city of Des Moines lacks a comprehensive public transit system, while public transit is nearly nonexistent in the suburbs.

The report noted the "cliff effect" that causes parents to lose Child Care Assistance if their wages increase above a certain level, which is still far below self-sufficiency. Two examples:

A single mother with one child who works full time is eligible for as much as $5,245 per year in Child Care Assistance if her wages reach as high as $11.10 per hour. But if she earns just a nickel an hour more, she would lose her eligibility altogether.

A working couple with two children would lose their child care subsidy when each parents earn as little as $8.50 per hour working full time. The Child Care Assistance they would lose would cost them nearly $9,000 annually.

The Iowa Policy Project has published work on the cliff effect for child care assistance and other state support programs, such as "children's health insurance coverage, home energy assistance or eligibility for a low-income tax credit."

"Compared to the general population of Polk County, Black residents are losing ground in educational attainment, and at an alarming rate," researchers found. "In 2005, 12.9 percent of Black Polk County residents had less than a high school education. By 2014, this number had risen to 17.1 percent." I assume those statistics reflect the growing number of African refugees or immigrants from the African diaspora who have settled in the Des Moines area during the past decade.

While Polk County's African American population has grown substantially since 2000, the same cannot be said for political representation of black people. "In 2016, we see little change from the 1960s and before in the balance in representation in elected positions. In the Iowa General Assembly, Polk County Board of Supervisors, city councils throughout Polk County, and all school boards in the county there are only 7 African American elected officials. Five African Americans serve in the Iowa House of Representatives, two of whom are from Des Moines. The remaining 2 individuals serve in school board positions." One of those is Caldwell-Johnson, just re-elected to the Des Moines school board last month.

Iowa has long had one of the worst racial disparities in its criminal justice system, with black people far more likely to be arrested on drug possession charges, despite similar rates of marijuana use, to cite just one well-known study. Over eleven data-filled pages, the report covers many aspects of this persistent problem.

For instance: "at each decision point in juvenile justice," there were racially disparate outcomes in Polk County. Black youths were less likely than white youths to be put in a diversion program called “Second Chances,” designed to keep people from having a criminal record, and more likely to be put on probation or in secure detention. "Black youth only account for about 6 percent of the juvenile justice population, yet account for a significantly higher proportion of juveniles detained, charged, and sent to adult court. Although these records do not follow the juvenile into adulthood for the most part, being a part of the juvenile justice system can have long-term effects on the youth’s life and ability to make money."

Many speakers at the Fifth Annual Iowa Summit on Justice and Disparities on October 10 will discuss racial disparities throughout the justice system. 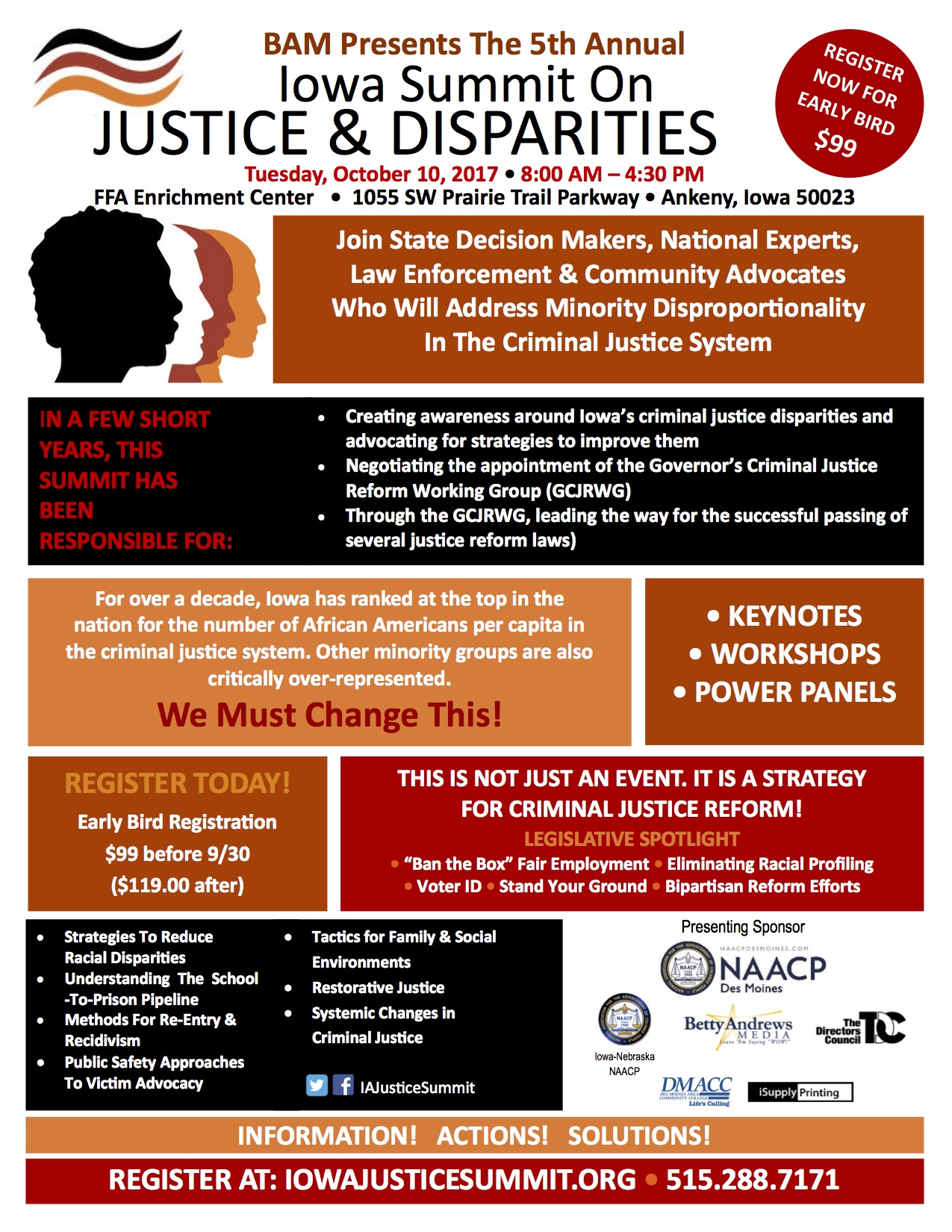 The report's final section spends eight pages discussing racial disparities in the health status, access to care, and health insurance coverage of Polk County residents. A few numbers revealed that the problems begin very early in life. Black women "were more likely to delay entry into prenatal care" and "give birth to a higher percentage of low-weight babies" than do women of other races. "Nationally, low birth weight is one of the leading causes of infant mortality and low birth weight babies have a higher risk of health complications throughout their life."

Black children in Polk County also had a much higher rate of emergency room visits than did white children, and only 67 percent of black children "had a 'medical home' or a regular doctor or nurse that coordinates care."

Any relevant comments are welcome in this thread.