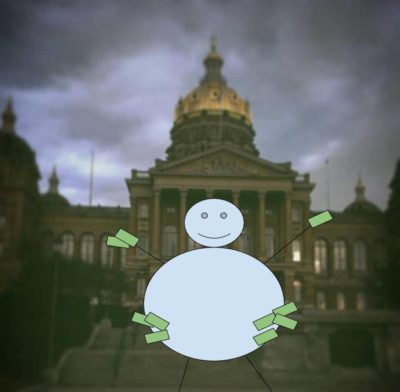 Part 2: How to corrupt the Iowa House (updated)

UPDATE: Tyler Higgs updated this article on October 21. Click here to skip to the updates below.

Second in a series by Tyler Higgs, an activist and former candidate for Waukee school board. He previously explored how to corrupt a school district. -promoted by desmoinesdem

Let’s say that you are a shady politician, and you want to take a whole lot of money from one source. Normally, campaign laws would require you to disclose your donor's name, which could be problematic or politically damaging. Here’s how you can get around the laws:

1. Have your shady donor(s) hire an attorney to create a Limited Liability Company (LLC). That way, the business isn’t in the donor's name and can’t be traced back to them.

2. Have your shady donor(s) put their money into the the LLC.

3. Accept all the money you want from the LLC. It doesn't have to disclose who donated!

4. Hope your donor doesn't send threats to people, exposing who they are.

A similar process seems to have occurred in Waukee.

Anna Bergman is a Waukee City Council member and the Republican nominee for Iowa House district 44, an open seat that both parties will target. Her campaign accepted a $20,000 contribution from an obscure company named “Drain the Water, LLC.” The company doesn't appear to do any other business and is registered at the same address as a different company. It has all the appearances of being a shell company, including a lame pun name. $20,000 represents 95 percent of Bergman’s cash on hand as of July 14.

But appearances can be deceiving. There could be a perfectly reasonable explanation for this donation and the unusual way it was made, so I asked simple questions that should be easy to answer, if the donation was ethical. I wanted to know who donated and why and what sort of business “Drain the Water” did.

1. Lisa Wilson, who is a local attorney and owner of record of “Drain the Water, LLC.”. She declined to reply.

2. Anna Bergman, who declined to name her donor when I asked on July 19, 2018. However, she said, “He's actually hosting an event for me in just a couple of weeks”. Toby Torstenson held a fundraiser for Bergman on August 2. That event was at the same location registered to both Torstenson's company, “Priority Excavating, LLC”, and the apparent shell company, “Drain the Water, LLC.” Also in attendance, according to a Facebook post by Bergman: acting Lieutenant Governor Adam Gregg, Iowa Senate President Charles Schneider, State Representative Jake Highfill, and State Representative Zach Nunn, who is now running for an Iowa Senate seat.

3. Viki Stodden, who is listed as the contact for “Drain the Water” on a filing with the Iowa Ethics and Campaign Disclosure Board. Naturally, I thought of reaching out to Stodden, since her name is on the form reporting the "one-time contribution" by a "permanent organization."

And that's when I was threatened by Toby Torstenson.

1. I NEVER emailed or contacted Toby Torstenson. I sent one email each to Lisa and Viki. His message to me appeared to be reacting to an email that Viki forwarded him.

3. When he says “My beliefs,” I believe he's answering the question I asked Viki: “What are the political beliefs of the donor?” I infer that he is confirming he is one donor behind the $20,000.

But this is not about Toby Torstenson. It's about Anna Bergman.

Bergman's campaign accepted as much as $20,000 from a man who threatens strangers. I don't believe people usually make threats out of fear that their totally ethical acts will be exposed. I also don't think people typically just give friends $20,000.

The public can't know what the Iowa House candidate may have promised to the owner of the excavating company. But I've seen enough to think it's no wonder Bergman accepted this donation under the cover of darkness that an LLC provides.

If Bergman has any integrity left, she'll donate this dirty money to a good cause. I bet it'd even be good politics. She shouldn't want this guy's dirty money if she really wants to empty the pond.

Appendix: How to Fight Corruption

I've learned a lot the past few weeks. This list is a reminder to my future self and, I hope, an aid to anyone else looking to fight corruption:

1. Care. You can't care about everything all at once, and you can't change everything. But don't give up. Pick something to care about, big or small, and get passionate about it. Apathy is corruption’s bedfellow.

3. Research issues. Whatever issue you care about, read up. Study it so that you know what questions to ask. I find campaign finance fascinating and like searching around to see who is buying our politicians.

4. Ask questions. Even if you don't expect an answer or you expect a lie, ask the question. Make the corrupt official go on record refusing to answer the hard questions. Hope the public is smart enough to see through their facade.

5. Share the answers (or lack thereof). We don't all have the time and resources to do this with every issue all the time, but if we share what we learn, we can accomplish more good than if we don't.

6. Speak truth to power. Confront lies and spin with facts. Be respectful but firm. Sometimes it feels like no one else cares or no one else is listening, but speaking your truth is its own reward.

7. Expect to be challenged. Strive for growth. Yearn for truth, but also realize that some people can't be reasoned with and agree to disagree. They're just wasting your time. You might not be perfect, but you've done the work. Let the evidence guide you.

8. Celebrate. When we work to expose corruption, we add a cost to being corrupt. The politician still might accept the dirty money, but they'll know they'll be asked to publicly answer for it. Maybe another politician will see that and think twice before taking dirty money. We might not know when we make a difference, so celebrate the work you do, not the results you see.

The latest financial reports are out. This portion will cover all donations received in 2018 through Oct. 14, including those contributions discussed above.

Both candidates in HD44 received large contributions from their respective state political parties, and both candidates donated money to their respective state political parties. Interestingly, Kenan Judge has given more to the Iowa Democratic Party than he has received from them (they returned all but 9 percent of his contributions). Whereas Bergman has accepted more from her party than she has given (She returned 13 percent of their contributions).

Excluding party donations, Bergman is 59 percent funded by companies or other entities (This number increases to 90 percent if net contributions from the Iowa GOP are included). Those entities are, as follows:

In comparison, Kenan is only 11% funded by companies or other entities (This number decreases to 4% if net contributions from the Iowa Democratic Party are included -- remember Kenan actually gave the IDP more than he received from them). Those entities are, as follows:

I would like to take a moment to address a meme that has been circulating in progressive Facebook groups:

Technically, everything in the meme is true, but there are some points that I think warrant additional clarification and information.

The first link under Anna Bergman's picture links to the Iowa Secretary of State’s business entities search, but I believe it’s meant to link to their page showing the information for Bergman Riding Academy. This page shows that Bergman is the owner of record of the riding academy business and that the business office is registered at 28406 280th St, Waukee, IA 50263. The property at this address, however, was not owned by Anna Bergman but by Allen and Sandi Bergman, Anna’s parents. A google Map search gives the address 24678 T Ave, Dallas Center, IA 50063 for the riding academy, which is 4 miles away from the home office address (This is consistent with the address on the riding academy facebook page). Dallas County Assessor’s records indicate that this land is also owned by Anna’s parents. It is likely that the business used Anna’s parents’ home address for mailing and/or tax purposes. It was Anna’s parents’ home address that sold to Apple, not the Riding Company’s address. Interestingly, it appears that although Anna is owner of record of the business, her parents own the land and building used by the company.

The second link in the meme shows that Bergman is a member of the Waukee City Council.

The third link shows a Des Moines Register article regarding a special meeting of the Waukee City Council to approve plans for Apple to build a data center. This meeting and vote did occur. However, I think it needs to be clarified that although it is true that Bergman’s family gained $800,000 from the sale to Apple that was approved by the Waukee City Council, Bergman herself abstained from that vote.