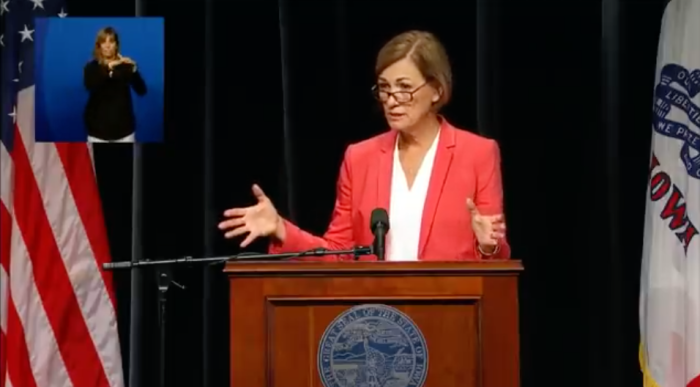 Everything wrong with Kim Reynolds' leadership in 1 minute, 33 seconds

Governor Kim Reynolds provided many jaw-dropping moments at her latest news conference on September 2: from falsely claiming to have implemented "a lot of" the White House coronavirus task force's recommendations to defending her "personal responsibility" mantra to misleading about why the state still doesn't provide accurate COVID-19 testing data, to walking away from a reporter's follow-up question.

But one exchange, more than any other, crystallized why Iowa is still one of the worst states for COVID-19 spread.

Caroline Cummings of the Sinclair Broadcast Group asked about Iowa State University's decision to allow 25,000 spectators to attend the first football game at Jack Trice Stadium on September 12. "How is this safe, when we're talking about Story County being a coronavirus hot spot, and do you support this decision to allow this many people in the stands?"

Reynolds must have known she would need to answer this question. The university's announcement on August 31 had generated in-state and national media coverage and criticism from public health experts, since Story County's new COVID-19 cases per capita and positivity rate for recent tests were among the highest in the country.

The governor's response was beyond belief.

"GET OUR LIVES BACK TO NORMAL"

Yeah, as I just laid out all that we're dealing with over this last year, and how important it is to help maintain the safety and health of Iowans, but also the livelihood and to start to try to find ways that we can get our lives back to normal, we can do these things safely and responsible.

Reynolds led with the contradiction at the heart of her approach to managing COVID-19: balancing public health concerns with a desire to return to pre-pandemic routines. Again and again at her news conferences, she has asserted that Iowa businesses, schools, and other venues can reopen "safely and responsibly." As far back as May, she was telling the public, "We have to move forward," and "We have to get things back to normal."

Reynolds does not appear to grasp that bringing transmission rates down would provide the fastest path back to a "normal" way of life. Countries and states that have gotten COVID-19 under control have not only seen fewer residents die on a per capita basis, but are also experiencing less economic disruption.

The explosion in Iowa's case counts, death numbers, and positivity rates have belied Reynolds' assertion on May 5 that "it's only going to get better" as Iowa tests more people for COVID-19. Our state's transmission rate has been above the level indicating uncontrolled spread all summer. Data compiled by Johns Hopkins University and CNN show that as of September 4, Iowa's per capita rate of coronavirus cases was nearly as high as that of New Jersey and New York. Statista prepared this graphic:

Iowa should be doing much better than those early hot spots, since our state has much lower population density than New York or New Jersey, and our leaders had weeks longer to prepare our pandemic response.

"WE HAVE TO HAVE PERSONAL RESPONSIBILITY"

Beginning at 0:34 in the video, Reynolds asserted,

So if you have underlying conditions and you're part of a vulnerable population, maybe I wouldn't go to the Iowa State football game next week.

Bleeding Heartland has discussed before how Reynolds undermined efforts to reduce transmission by portraying COVID-19 as a threat to only a small percentage of those who become infected. She has also depicted basic safety measures like mask wearing as a concern primarily for senior citizens or those with underlying health conditions.

Even worse, Reynolds hasn't shown any commitment to "personal responsibility" herself--hugging or huddling close to others (including some over age 65) at various social or political gatherings this summer.

Republican groups across Iowa have compounded the problem by holding indoor central committee meetings or fundraisers with no social distancing and few attendees wearing masks.

"IF WE PUT THE MITIGATION STEPS IN PLACE..."

The governor's embarrassing lack of preparation and poor coordination were revealed starting at 0:56.

Less than two hours after Reynolds uttered those words, Iowa State University's Athletics Director Jamie Pollard announced that there would be no fans at the home opener after all. In a news release, Pollard said ISU President Wendy Wintersteen "shared with me on Tuesday evening that, after weighing feedback she has received from the community, she has decided to reverse the decision."

Reynolds and Iowa Department of Public Health officials should have been working behind the scenes to discourage ISU leaders from bringing crowds to Ames for football games. Barring that, they could have at least projected the appearance of leadership by signaling that they disapproved of the idea.

Instead, the governor went out on a limb defending a plan that had been nixed the night before.

Let's be clear: no "mitigation steps" could make it safe to bring 25,000 people from dozens of Iowa counties to congregate in a stadium for several hours. Professional sports teams around the world are playing in empty stadiums, because everyone understands it's not safe to gather large crowds.

Social distancing would be difficult if not impossible to maintain as thousands of people filed through the entrances and exits at Jack Trice. Restrooms would predictably become crowded during breaks in the action. Even at reduced capacity in the stands, people would likely sit close to strangers or friends who are not part of their households. Some would remove their masks. Then they would drive home to dozens of counties.

In any case, the Ames metro area and Story County have been racking up some of the country's highest new case numbers and positivity rates. The latest report from the White House coronavirus task force, dated August 30, recommends that social gatherings be limited to ten or fewer people in "red zone" areas like Ames. Even in late July, when the White House task force determined Story County was in the "yellow zone," experts recommended that Iowa leaders close bars and restrict gatherings to no more than 25 people in such areas.

"YOU JUST HAVE TO BALANCE ALL OF THAT"

We're playing [high school] football on Friday nights. We did a whole summer of softball and baseball, where 95 percent of the teams were able to complete the season. And that was over--what was it, 600 or so teams, I think, that participated in the summer in baseball and softball. And we were able to manage and mitigate that so that kids could have some normalcy to their lives.

And so you just have to balance all of that. And if we see an impact, then we'll have to adjust accordingly.

Again, Reynolds is focused on providing "normalcy" and "balance," as if those considerations might justify bringing 25,000 people together in the state's worst COVID-19 hot spot. By the time officials could "adjust accordingly," football fans would have brought the virus back to many other communities.

Why Reynolds points to high school sports as a success story is unclear. While I haven't seen any research specifically on the impact of the softball and baseball seasons, Iowa has not managed the virus well by any standard this summer. Our state's case counts, hospitalizations, and deaths from COVID-19 have been on the rise since late June.

Cummings tried to break in: "But the students, you acknowledge the students--" The governor wasn't having it: "I've answered the question."

Cummings was correct. When shutting down bars in six counties on August 27, Reynolds had blamed students for the recent spike in cases.

In fact, answering the very next question on September 2, the governor cited statistics about cases and positivity rates in Story and Johnson counties to support the narrative that students have been driving the spread. And when answering the question right after that, Reynolds said,

We all have to be responsible, we really do. We have to think about what we're doing and the impact that it has on other people, the impact that it has on mom and dad and grandpa and grandma and our health care workforce. And that is just a reality of COVID-19. It is still in our state, and until we find a vaccine, or we have therapeutics that can help really knock it out, we have to continue to be vigilant.

The talking point would be more convincing if Reynolds were vigilant around other people herself. She hasn't been.

"If you don't think it's safe, don't go" is not a public health strategy. About 65 people felt safe to attend an indoor wedding in Maine on August 7. But their actions led to at least 147 confirmed COVID-19 cases, with outbreaks in a prison and a nursing home. Three affected people have died, none of whom attended the wedding.

Nearly six months into this pandemic, Iowa is trending in the wrong direction. For reasons I can't fathom, our governor won't use all the tools at her disposal to turn things around and is stuck in patterns of thinking that will have deadly consequences.