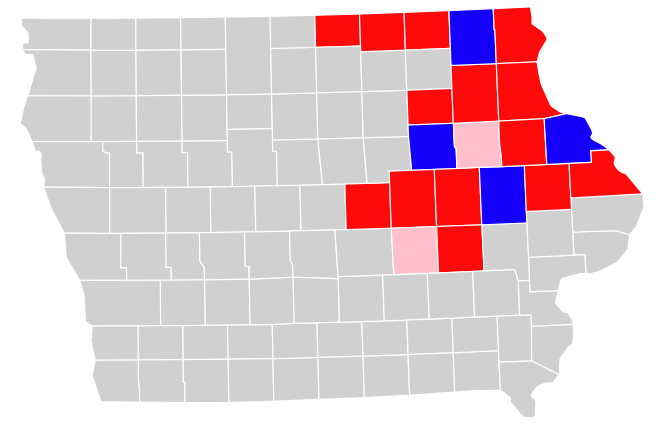 Abby Finkenauer's triumph over two-term U.S. Representative Rod Blum in the first Congressional district was one of this year's most satisfying wins for Iowa Democrats.

The outcome wasn't unexpected; leading forecasters saw IA-01 as a "lean Democratic" district for two months. Even so, the pick-up was hardly a given. Iowans tend to re-elect incumbents. Some of the 20 counties in IA-01 experienced the state's biggest swings toward Republicans in 2016, and Blum ran about 5 points better than Donald Trump did in his district. Last month, Blum and his allies had claimed the incumbent was gaining on Finkenauer in internal polling.

But Blum's campaign strategy--an aggressive mix of race-baiting television commercials, taxpayer-funded mailings that resembled electioneering, and Trump-like petty shots at journalists--couldn't deliver the goods. Finkenauer received 170,342 votes to 153,442 for the incumbent (51.0 percent to 45.9 percent), according to official results.

Let's take a closer look at how the second-youngest woman ever elected to Congress (after Alexandria Ocasio-Cortez of New York) assembled that margin of victory.

VOTES FOR CONGRESS IN IA-01

Click on any red, pink, or blue county to bring up the vote totals and percentages for Blum and Finkenauer there.

For those who prefer a table, here are the results for Finkenauer and Blum in each county, listed in descending order from most to least votes cast in the Congressional race. All figures reflect official numbers from the Iowa Secretary of State's website.

A few points stand out.

Finkenauer racked up good margins in the largest counties.

Residents of IA-01 cast about 84.5 percent as many ballots in this general election as in the 2016 presidential election, according to the popular vote tracker compiled by David Wasserman and Ally Flinn of the Cook Political Report.

District-wide, Blum's vote total dropped by more than 53,000 (about 25 percent) compared to 2016. Finkenauer received about 96 percent as many votes as Blum's last Democratic challenger, Monica Vernon, who lost by 53.7 percent to 46.1 percent.

Finkenauer gained 98 percent as many votes in Linn County as Vernon did, even though Vernon has lived in Cedar Rapids for decades and served multiple terms on the city council. Blum managed only about 74 percent of his 2016 vote total in the district's largest county.

Finkenauer received about 93 percent as many votes as Vernon did in Black Hawk County, containing the Waterloo/Cedar Falls metro; Blum received nearly 30 percent fewer votes this year in the district's second-largest county.

In Dubuque, home base for both candidates, Finkenauer exceeded the number of votes cast for Vernon, while Blum's total dropped by 27 percent compared to 2016.

The three largest counties provided 27,620 more votes for the challenger, a nice cushion. But that might not have been sufficient.

Finkenauer kept the race relatively close in counties she lost.

Although Blum carried sixteen of the district's 20 counties, he won just one (Delaware) by more than 20 points. That was also the only county where Finkenauer finished below 40 percent. She held Blum below 50 percent in two of the counties he won and was between 6 and 15 points back in most of the others.

Not getting blown out in the smaller counties was important. While IA-01 contains three of Iowa's ten largest cities, it is much less urban than the third Congressional district, where Democrat Cindy Axne defeated two-term Republican David Young.

Axne could afford to finish below 40 percent in twelve counties (below 30 percent in two of them) because collectively, those counties provided only about one-fifth of her district's votes. Losses on that scale in IA-01's smaller communities would have wiped out Finkenauer's leads in Linn, Black Hawk, and Dubuque.

Did Finkenauer merely benefit from the partisan lean of her district? After all, a few days before the election, registered Democrats outnumbered Republicans by more than 23,000 in IA-01, but by fewer than 1,000 across IA-03.

When we compare results for the two highest-profile offices, it becomes clear that IA-01 voters were not destined to support anyone with a "D" next to her or his name. Finkenauer substantially outperformed the Democratic nominee for governor.

At first glance, this table doesn't look too bad for Fred Hubbell. District-wide, he received 4,784 fewer votes than Finkenauer. In most counties, his vote share was only a few points lower. He got more votes than Finkenauer in Marshall and Poweshiek and almost as many in Tama. (Those three counties are part of the Des Moines media market; tv ads for or against the IA-01 candidates ran on Cedar Rapids stations.)

Now look at how both leading candidates for governor fared in the same counties.

VOTES FOR GOVERNOR IN IA-01

Click on any county to bring up vote totals and percentages for Hubbell and Governor Kim Reynolds.

For readers who prefer all the results in one table:

I was skeptical when Ann Selzer's September poll for the Des Moines Register and Mediacom found Hubbell narrowly leading statewide but slightly trailing among respondents living in IA-01. Could Reynolds be ahead in the traditionally Democratic northeast part of the state, where she's never lived?

The final result shows the governor did better here than she should have. Hubbell came out of the IA-01 counties with only 4,207 more votes than Reynolds (a 1.3 percent margin). In contrast, he ran about 14,000 more votes (3.9 percent) ahead of Reynolds in the sixteen counties that make up IA-03.

One would expect Hubbell to do particularly well in Polk County, where he has spent most of his life. But he should have been able to build a larger lead in IA-01. Remember, those counties collectively contained about 23,000 more registered Democrats than Republicans. Matching Finkenauer's results (she outpolled Blum by 16,900) would have gone a long way toward making up Hubbell's statewide deficit of about 36,000 votes in the governor's race.

Many factors could explain why Finkenauer did significantly better than Hubbell in IA-01, including:

Any comments about the results in IA-01 are welcome in this thread.