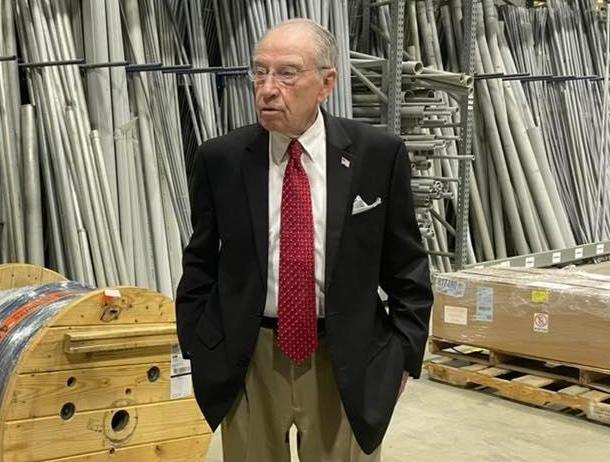 Staff for U.S. Senator Chuck Grassley have again denied the senator was recruited to derail the electoral college count on January 6, 2021.

Politico was first to report on the memo released last week by the House Select Committee investigating the January 6 coup attempt. The December 13, 2020 email from Kenneth Chesebro to Rudy Giuliani shows Republicans plotting to keep Donald Trump in power wanted "Chuck Grassley or another senior Republican" to preside over counting the electoral college votes. The plan envisioned that the presiding official would refuse to count votes from Arizona, citing supposed "irregularities" and two slates of electors.

The vice president typically presides over the electoral college count in the Senate. But as Senate president pro tempore, Grassley would have been the default choice to lead the session if Vice President Mike Pence had been absent or recused himself.

Grassley's communications director Taylor Foy told Politico, "We were never approached about this strategy." Asked whether Giuliani or Chesebro ever discussed this plan with Iowa's senior senator, and if so, what he told them about counting the electoral votes, Foy told Bleeding Heartland in a June 1 email, "Neither Sen. Grassley nor his staff were approached about this strategy."

Last December, Foy said neither Grassley nor his staff had been shown two other materials spelling out a detailed plan to prevent Joe Biden from becoming president: a memo by attorney John Eastman and a PowerPoint that some Republicans in Congress viewed on January 4.

Some Iowans have expressed skepticism that Grassley was not in on the scheme to undermine the orderly transfer of power. They note that Iowa's senior senator told reporters on January 5, 2021, "if the Vice President isn’t there and we don’t expect him to be there, I will be presiding over the Senate" when electoral votes were counted.

However, the senator's staff quickly walked back those comments, saying Grassley meant only that Pence was unlikely to be present during Senate debate over the 2020 election results.

I find it plausible that Grassley was not recruited for what a federal judge has called "the crimes of obstruction of an official proceeding and conspiracy to defraud the United States."

Grassley replied, "I don’t have to – the Constitution does." And in response to a follow-up, "do you acknowledge him as president-elect?", Grassley said, "I follow the Constitution."

Later on December 14, Grassley told the Des Moines Register that "under the Constitution," whether Biden was president-elect "was decided by the Electoral College."

That was far from an admission that Biden legitimately won the election, let alone a denunciation of Trump's wide-ranging and likely illegal efforts to stay in office. Nevertheless, Grassley's public statements on December 14 could have signaled that he would not be a reliable co-conspirator during the weeks leading up to the January 6 attack on the Capitol.

UPDATE: I forgot to mention another relevant factor. In late 2020 and January 2021, Iowa Republicans were demanding that Democrats acknowledge Mariannette Miller-Meeks' victory in Iowa's second Congressional district. She was certified the winner by a six-vote margin out of around 394,000 votes cast. Disputing the electoral college votes for Biden could have caused problems for Miller-Meeks.

Grassley directly connected those two elections in a statement his office released on January 6. Excerpts:

The Constitution and our laws give Congress few options and limited authorities when it comes to certifying presidential election results. Congress has no role in conducting elections or adjudicating election disputes, only receiving and formally counting the electoral votes cast in each state. This constitutional process allows the states to determine under their own laws and legal systems how their electoral votes are allocated. And let’s be clear about what the stakes are here. If an objection to a state’s electoral certification is sustained, the state’s electoral votes are thrown out, not reallocated to a different candidate. So anyone voting to object to any state’s certification of electoral votes is voting to disenfranchise an entire state.

The right place to resolve electoral disputes is in the courts. As we saw in Iowa’s Second District House race, there is an established process to review election disputes, and that process should not involve Congress overriding independent judicial decisions. Our independent legal system is tasked with expeditiously evaluating election disputes.

Top photo cropped from a picture posted on Senator Chuck Grassley's official Facebook page on May 13.