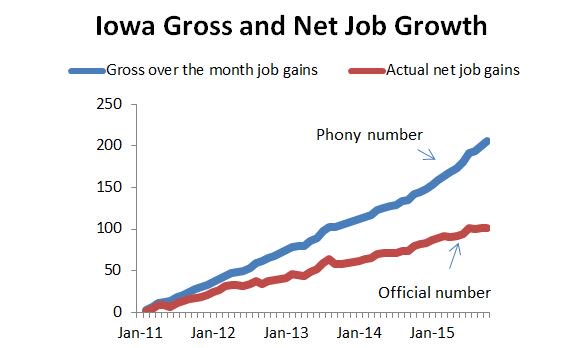 I was encouraged when Beth Townsend became Iowa Workforce Development director early this year. The previous director, Teresa Wahlert, was one of Governor Terry Branstad's worst appointees; I suspect her record for legal entanglements involving an agency director for the State of Iowa will never be surpassed. In contrast, I'd heard consistently good feedback about Townsend's work as executive director of the Iowa Civil Rights Commission. The new director has taken several steps to bring Iowa Workforce Development's operations in line with federal labor laws.

Which makes it even more disappointing to see Townsend sell one of the biggest lies of Branstad's long, long stint as governor, first in her agency's annual budget presentation, and now in the editorial pages of Iowa's largest newspapers.

Among Iowa Workforce Development's many functions is to collect and analyze "a wide array of labor market data including: employment, industry and occupational statistics, wages, projections, trends and other workforce characteristics." The agency's Labor Market Information Division "works in cooperation with the United States Department of Labor’s Bureau of Labor Statistics (BLS) and Employment and Training Administration (ETA) along with the United States Census Bureau."

The economics profession has developed standard ways to measure unemployment and job growth. But upon returning to office in 2011, Branstad instructed Iowa Workforce Development to start tracking "gross over-the-month employment gains," a meaningless number that does not account for jobs lost during the same period. As Bleeding Heartland discussed here, the "gross" number allows Branstad to claim that he has kept his 2010 campaign promise to create 200,000 new jobs in five years--even though no labor market analyst would ever count jobs that way. Mike Owen of the Iowa Policy Project observed last year that Branstad's method is "Kind of like winning a basketball game by shutting off the opponent’s side of the scoreboard." If Iowa adds 200 jobs in the construction sector one month but loses 400 jobs in manufacturing the same month, Branstad can

Ignore the manufacturing losses and call it a gain of 200. That is exactly how this method treats job counts. [...]

Our experience with IWD staff is that they are professionals. No doubt they cringe every time that number comes out of the agency — whoever ordered them to compile it.

Townsend wasn't cringing at the November 30 press conference where she asserted that the Branstad administration had created more than 200,000 jobs. The Iowa Policy Project has shown that the real job creation number is around 101,700 since January 2011.

During the past two weeks, Townsend has promoted the gross jobs number in the editorial pages of major Iowa newspapers. The Cedar Rapids Gazette ran her guest column on December 8. I couldn't find a link on the Gazette's website, but a nearly identical text ran on the opinion page of the December 21 Des Moines Register. I assume Townsend has submitted the same piece to other Iowa newspapers and will update as needed with more examples. Much of the commentary focuses on the agency's work to help Iowans find employment, but she leads with the fake milestone:

Iowa is in the enviable position of trying to fill all the jobs available across the state and across all industries. The gross number of jobs created is one measure of the health of our economy. As reported by Iowa Workforce Development to Gov. Terry Branstad and Lt. Gov. Kim Reynolds in its annual budget presentation, more than 200,000 gross jobs have been created since this administration began on Jan. 14, 2011.

Business and industry create jobs, and government’s role is to provide the most favorable business climate available for job creation to flourish. Economists use a variety of tools and measures to track the health of the economy, including the number of jobs created. Governor Branstad and this administration have been steadfast in its commitment to tracking the gross number of jobs as a measure of the state of economy in Iowa. While the gross number does not include the loss of jobs, even the net job rate has continued to increase in our dynamic economy. The key message, by any measure, is that both the net and the gross job figures are trending up and demonstrate a robust economy.

Now that's framing: "steadfast in its commitment to tracking the gross number of jobs as a measure of the state of economy in Iowa." More like "steadfast in its determination to mislead Iowans about the success of its policies." As the Des Moines Register's editors noted earlier this month,

the public fully expects political candidates to cite only those statistics that bolster the arguments they are making.

But they don’t expect a sitting governor to use a nonpartisan, publicly funded state agency to manufacture and disseminate misinformation simply to make himself look good.

As things stand now, Iowa taxpayers are paying Iowa Workforce Development to create and distribute political propaganda that’s aimed directly at them. It needs to stop.

Owen wrote an outstanding response to Townsend's op-ed. You can read his take on "what it looks like when an agency director runs political interference for the Governor" on the Cedar Rapids Gazette's website. Iowa Policy Project reproduced the piece here. Excerpt:

To be clear, we in fact are nowhere close [to 200,000 jobs created under Branstad], and it’s too important to just let politicians fight about it.

Why? We need data, unfettered by political spin, to make responsible observations about the economy.

When you look at the data — still available on the same Iowa Workforce Development spreadsheets — you can see how sluggish job growth has been in Iowa. It’s a long-term trend. We are, as Townsend stated, creating jobs in Iowa — a monthly increase of about 1,800 on average for the last five years. Do the math: 1,800 x 57 months. With three months left, we’re only about halfway to the Governor's goal.

In fact, as we often point out using a calculation from the Economic Policy Institute, we arguably have a “jobs deficit” — we have about 35,000 fewer jobs in Iowa than what we need to keep up with growth in the Iowa population since the start of the last recession, in December 2007.

Owen explained that "job deficit" concept in this commentary from October 2014:

More importantly, the best way to look at job growth is to remove the artificial political frame and examine it the way economists would. The Economic Policy Institute came up with a sensible measure, from a relevant starting place: the start of the last recession. Look at the job change from the start of the last recession and compute what would be needed to (1) make up lost jobs and (2) keep up with increased population, which for Iowa is about a 5 percent increase.

Townsend should be fighting to keep Iowa Workforce Development out of the political fairy tale business. Instead, she continues to tarnish her agency's reputation as a reliable resource for labor market data.