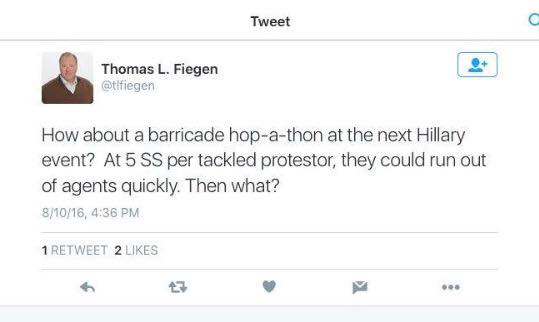 Hillary Clinton came to Iowa yesterday for the first time since the February 1 caucuses. After visiting the Des Moines t-shirt shop Raygun, she spoke primarily about economic policies to a packed Lincoln High School gymnasium.

During the rally, a woman jumped over the barricade and ran toward the stage. Several Secret Service agents tackled her, while Clinton showed remarkable composure as she kept delivering her stump speech. The protester was apparently representing the "Direct Action Everywhere" community, trying to call attention to "Hillary's support for Costco and other corporate animal abusers."

As a card-carrying member of the American Civil Liberties Union, I support anyone's right to protest peacefully, to hold up signs, and even to disrupt a political event by shouting taunts or slogans (though heckling's not my personal style). But rushing the stage is not an acceptable form of protest, especially right after the Republican presidential candidate hinted that "Second Amendment people" might be the only way to stop Clinton from appointing judges to the federal bench.

Fiegen left the Democratic Party in June, shortly after finishing a distant third place in the U.S. Senate primary. During his Senate bid, Fiegen built up a large following on Twitter and Facebook. His strategy was a bit odd, in that many days he posted more material supporting Bernie Sanders or bashing Hillary Clinton than promoting his own candidacy or criticizing Senator Chuck Grassley. Since losing the primary, Fiegen has continued to fill his social media feeds with anti-Clinton material.

Yesterday afternoon, Fiegen posted this reaction to events at the Clinton rally:

That tweet had been deleted by the time a Bleeding Heartland reader alerted me to its existence. I sought confirmation on who posted it, because various staffers and supporters helped Fiegen with social media during his Senate campaign. In later conversation (screen shots posted below), Fiegen confirmed that six people tweet on his behalf, but he wrote that particular post and did not know who deleted it. He also characterized jumping the barricade as an "act of civil disobedience," adding that such action "ended the Vietnam War. How about we continue to protest until HRC resigns like Nixon did."

Other readers directed my attention to a Facebook thread, in which Fiegen posted a nearly identical comment: "How about a barricade hop-a-thon at the next Hillary event? At 5 Secret Service agents per hopper protestor, how long before they run out of agents? Then what?" Challenged by several commenters, Fiegen added down thread, "Let's view hopping a barricade as a form of civil protest. No intent to harm. Just a message that we know she rigged the Democratic primary." (screen shot below)

Rushing at a presidential candidate, even while unarmed, is a threatening action. I don't care how upset you are about the outcome of the primaries or the treatment of animals or gun rights or climate change or whatever your pet issue happens to be. You do not have a right to storm the stage while a candidate is speaking.

Fiegen seemed to deny encouraging people to try to overwhelm the Secret Service by running toward Clinton in large numbers. ("I asked a question." "I did write it as a question.") Sure, he asked a question, just like Trump was making a "joke" when he alluded to "Second Amendment people" having a way to stop Clinton.

Clinton addressed those Trump comments, telling the Lincoln High School crowd, "Words matter my friends, and if you are running to be president or you are president of the United States, words can have tremendous consequences. Yesterday we witnessed the latest in a long line of casual comments from Donald Trump that cross the line."

Though Fiegen is no longer a candidate for office, and his words aren't nearly as influential as Trump's, he is still a public figure with thousands of followers on social media. He should stop floating ideas that could get someone hurt or killed. There are plenty of safe ways for like-minded people to express their opposition to the Democratic nominee.

UPDATE: The Des Moines Register's editorial board weighed in on August 12.

This is the sort of talk that should disqualify Fiegen from ever again holding any sort of public office.

The act of encouraging people to jump barricades and overwhelm armed Secret Service agents at a rally for a presidential candidate is sheer, unadulterated lunacy. It’s reckless, and it’s extraordinarily dangerous.

Like Trump’s incendiary comments, Fiegen’s tweet is just vague enough, and just garbled enough in its broken syntax, that the two men can argue the words were entirely innocent and have been misconstrued by others. [...]

For his part, Fiegen says he was calling for non-violent civil disobedience at Clinton appearances. "I'm not calling for any kind of physical altercation," he told a Register editorial writer on Thursday. "My tweet was not to encourage people to rush the stage."

The reality is that jumping a barricade to get at a presidential candidate in the middle of a speech is guaranteed to result in violence. The best-case scenario is that the individual is tackled and thrown to the ground, as happened Wednesday. A scenario in which people jump the barricades en masse and overwhelm the Secret Service, which is what Fiegen seemed to envision, could easily result in people being killed.