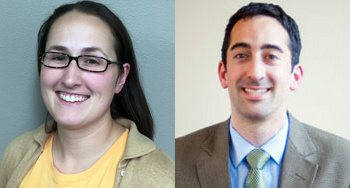 The non-profit news site Midwest Energy News has honored two Iowans on its second annual 40 Under 40 list of "emerging leaders" working on "America’s transition to a clean energy economy." From last week's announcement:

Erin Buchanan works as an Energy Services Coordinator for Cedar Falls Utilities in Cedar Falls, Iowa. In 2011, Buchanan was named a “rising star in public power” by the American Public Power Association. She is a graduate of the University of North Carolina-Chapel Hill, with a B.S. in mathematical decision sciences. She also holds an M.S. in statistics from Iowa State University. [...]

I wasn't familiar with Buchanan's work before learning about this award. I was impressed to see all the resources Cedar Falls Utilites provides for customers seeking to use less energy, purchase wind-generated electricity, buy units in a community-owned solar garden, or install small-scale wind or solar systems.

I've known Mandelbaum for many years and am an active supporter of the Environmental Law & Policy Center. The non-profit's legal team has contributed to major public policy victories in the renewable energy field, from a solar power case that went to the Iowa Supreme Court to mostly below-the-radar battles with intransigent rural electric cooperatives and investor-owned utilities Alliant and MidAmerican. Mandelbaum and his colleagues have also been involved in important water policy fights, such as a 2014 Iowa Supreme Court case that kept state "anti-degradation" rules alive. Earlier this year, an Iowa District Court ruled in favor of ELPC's lawsuit on behalf of the Iowa Environmental Council, seeking to force the state Department of Natural Resources to enforce those rules, "an important part of the [federal] Clean Water Act."