Iowa workers lost again at the statehouse on Thursday, as 55 House Republicans approved a bill that would tilt the workers' compensation system markedly toward employers. All 37 Democrats present voted against House File 518, joined by just one Republican, State Representative Rob Taylor. UPDATE: GOP Representative Clel Baudler was absent on March 16 but filed an "explanation of vote" in the House Journal on March 20 clarifying that he would have voted "nay" on this bill.

Lawmakers had received an enormous number of constituent contacts since the "dramatic" and "far-reaching" legislation first saw the light of day a little more than two weeks ago. In a rush to get this unpleasantness behind them before the weekend, GOP legislators insisted on a final vote before staff could analyze the cost of a "new career vocational training and education program," conjured up in an amendment filed the previous evening.

The workers' comp bill got off to a fast start. Introduced on the Monday of "funnel" week, it made it through the Iowa House and Senate Commerce committees within days. A bunch of large companies and business advocacy groups lobbied for it. Democratic State Senator Nate Boulton, a labor attorney by trade, described the proposal as a "corporate and insurance company wish list" aimed at "fixing the system for one-sided outcomes."

Yet the bill met with resistance as some experts joined worker advocates to warn lawmakers about unfair and unwise provisions. Meanwhile, the Des Moines Register's Kevin Hardy and Brianne Pfannenstiel exploded myths promoted by Republicans and business lobbyists. From their March 13 report:

"That's a pretty persuasive case that there's no reason to mess around with Iowa," said John Burton, a Republican economist and academic who studies workers' compensation. "This is kind of a race to the bottom, and everybody's trying to figure out a way to cut costs." [...]

• Over the last decade, workers' compensation premiums have fluctuated each year, decreasing twice as much as 4.7 percent and rising by as much as 7.9 percent in 2013, according to the National Council on Compensation Insurance.
• The numbers of Iowans injured on the job and the number of those cases litigated by state administrative courts have not increased in recent years, state figures show.
• Adjusting for wage growth, NCCI data show that the average medical cost of a workers' compensation case has ticked up in recent years from $27,223 per case in 2007 to $31,622 per case in 2014. But that 2014 cost was 2.5 percent less than the $32,443 per case in 2013.
• Burton argues there is no workers' compensation crisis despite what some businesses say. Nationally, employers are paying some of the lowest costs since the 1980s, even with a slight uptick in recent years.

For three days in a row this week, House File 518 and its companion, Senate File 435, sat on the debate calendar but were not brought to the floor in either chamber.

Was it possible Republicans didn't have the votes? The rumor gained steam when House leaders announced plans to debate the workers' compensation bill after dinner on March 15, then changed course a few hours later. Floor manager Gary Carlson had already agreed to jettison two of the bill's most outrageous portions, but some of his GOP colleagues remained unhappy. So Carlson filed a more extensive amendment that evening, and the House adjourned until the following morning.

• The original draft cut off benefits at age 67 for most injuries, arousing strong opposition from the AARP and some Republicans, including former Iowa Workers’ Compensation Commissioner Michael Trier. The amendment ditched the discriminatory age-based standard for benefits.

• The original text also would have excluded many claims from the system by forcing workers to prove that their job activity was "the predominant factor" in an injury, rather than a "material contributing factor." The amendment replaced "predominant" with "substantial."

• Another egregious part of the original bill would have "drastically" reduced benefits for shoulder injuries, in an apparent favor to the meatpacking industry. The amendment provided for slightly less stingy compensation for such injuries. The revised bill retains language classifying shoulder injuries as "scheduled member" rather than "body as a whole." In addition to shortchanging workers, that policy would shift costs from self-insuring companies to taxpayers or insurance companies, according to former Administrative Law Judge Marlon Mormann.

Other business-friendly provisions remained untouched in House File 518, such as language to "minimize late fees for employers who fail to pay benefits on time," "limit how much attorneys can reap in legal fees," and "allow employers to deny benefits if an injured worker tests positive for drugs or alcohol." (Note: current Iowa law already stipulates that employees cannot qualify for workers' compensation if they were intoxicated at the time of injury.)

The workers' compensation debate took up hours on the House floor on March 16, as many Democrats slammed the latest attack on workers and a handful of Republicans defended the bill. You can watch the stop-and-start debate in three videos archived here. 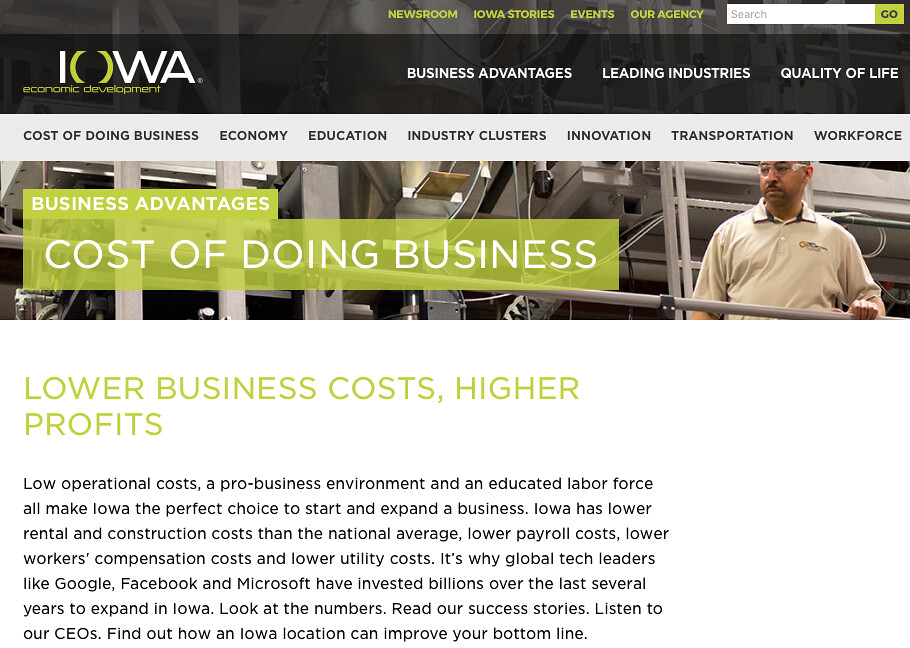 Democrat Mary Wolfe later thanked Worthan for standing up to speak (unlike most of his colleagues) and for admitting that House File 518 isn't about fixing any mythical built-in advantage for workers under current law.

"You made it clear, this isn’t so much about abuses in the system," [Wolfe] said. "It’s about premiums. It’s that insurance companies are raising their premiums. And so one way to force or to hope that those premiums are going to be lowered is if we gut the workers’ compensation system to the point where insurers can be pretty darn sure that they’re going to be paying out on a lot fewer claims.”

Many House Democrats described how the bill would harm workers. Wes Breckenridge spoke about his half-dozen shoulder dislocations, leading to multiple surgeries. Beginning around the 11:29:30 mark of this video, Jerry Kearns spelled out how a worker suffering a career-ending shoulder injury might receive only $40,000 total compensation under the GOP bill.

The most farcical spin came from Cownie, who introduced this bill as Commerce Committee chair. In Cownie's alternate reality, lower benefits spelled out in House File 518 are meant to encourage workers to go back to school and learn a new skill. Here's my transcript of Cownie's answer to a question from Kearns, starting around the 11:32:50 mark:

I have no idea if your figures are correct or not. They're your figures that I haven't gone over. But here's what the amendment does. The amendment puts something very innovative in that solves a problem: a vocational rehabilitation program with our community colleges that helps put people back to work who can't work because they were injured on the job. That's what it's all about. That's what we're trying to do. I think we can all agree, we don't want people not in the workforce. We have a wonderful community college system in this state, that helps solve this problem, that I think everyone in this room wants to solve. So that's what we're trying to get at with this, and I credit Representative Carlson with this. This was an innovative idea that's come about. I think it's something that's something we should all be very proud of, Representative Kearns.

Keep in mind that every job this guy has held in the last decade was handed to him because of his parents' wealth and connections.

Cownie pretends there is some virtue in slashing benefits for shoulder injuries, then offering affected Iowans a half-baked path to vocational training. But sending disabled workers to community college wasn't "what it's all about" or "what we're trying to do." Cownie's original bill was a grab bag of ways to make it harder for employees to file a workers' compensation claim and to reduce the benefits for injuries that qualified. This "innovative idea" was Carlson's last-ditch effort to salvage a bill that was too cruel even for some House Republicans.

From Kevin Hardy's March 1 story for the Des Moines Register:

He said shoulder injuries are common in meatpacking plants.

"These meatpackers are going right at their workers, saying, 'OK, the shoulder is the biggest part of the body we have to pay for. Let's make those claims worth nothing,'" King said. "It’s a grand design."

Under current law, for example, a rotator cuff tear requiring surgery is compensated as industrial disability. You receive weekly benefits equal to your lost earning capacity (a percentage) multiplied times 500 weeks. The new law would compensate a shoulder injury as a scheduled member: the most you will ever receive is the doctor’s impairment rating (usually 5 to 10 percent) multiplied by the value of your arm (250 weeks). No more, even if your injury causes you to lose your job or ends your career. Even if you undergo shoulder replacement surgery, the usual functional impairment rating of 22 percent will pay out no more than one year in benefits, even if you are now disabled for life. Gutting benefits as such for shoulder injuries will be a windfall to heavy industry, like meatpacking, where workers are at high risk for shoulder injuries.

Carlson's amendment increased the multiplier from 250 weeks to 400 weeks. But as Kearns showed, the bottom line is still a huge financial hit for a worker who may be disabled for life. During the same back and forth with Cownie (beginning around 1:33:50), Kearns pointed out that the amendment offers a worker up to $15,000 of educational benefit "which may or may not help that injured employee, who can't work at his regular job [for] the rest of his life, for $160,000 difference for lifetime benefit, where he could maybe at least support his family."

Democrats including Cindy Winckler grilled Republicans about how this Iowa Workforce Development evaluation would operate and how much the training program might cost. Late in the afternoon, Brian Meyer moved to defer action on House File 518 until 1 pm on March 20, so that the Legislative Services Agency could produce a new fiscal note, taking Carlson's amendment into account. But Meyer's motion went down on a party-line vote. Republicans presumably didn't want to face more crowded weekend forums with this bill hanging over their heads.

The next vote was on final passage. Every Republican present but Taylor was willing to send the workers' compensation bill to the Senate.

In a point of personal privilege a few minutes later, State Representative Chris Hall (the ranking Democrat on House Appropriations) blasted GOP colleagues for violating their own "budget principles." My partial transcript:

Principle number 3: "We will not balance the budget by intentionally underfunding programs." Not only have you underfunded programs--like community colleges, like public safety and law enforcement, like our state universities, which have now indicated they will increase tuition on college students and their families--but you have also done so at the same that you are creating new programs. You are underfunding existing programs while creating new ones.

In the bill we just finished debating, you chose not to defer on it even after admitting that significant changes were made, and that new and significant costs will be incurred by Iowa Workforce Development because of that. You did the same thing in your voter suppression bill last week [House File 516]: new costs, new programs, at the same time that existing programs are being underfunded. Tell me what about that rings true to fiscal conservatism?

You can watch Hall's personal point starting around the 4:56:00 mark of this video.

Both chambers need to approve identical bills before Governor Terry Branstad can deliver a parting gift to business and a parting shot to hard-working Iowans.