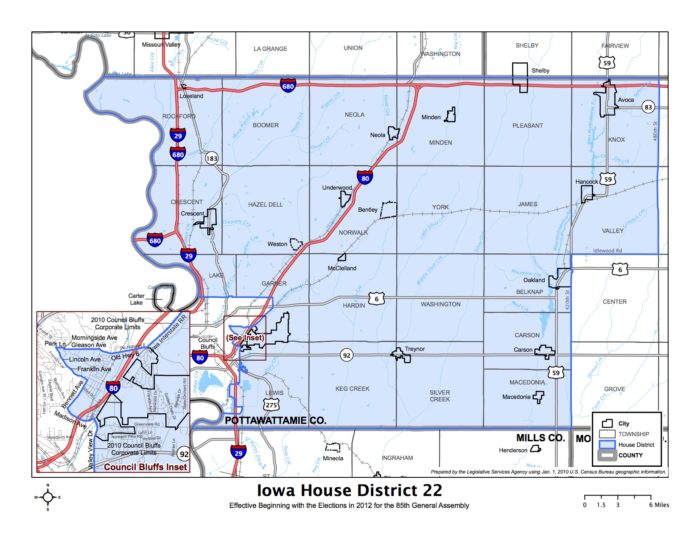 Democrats and Republicans held nominating conventions on May 30 for the election to replace Greg Forristall, who passed away last month. First-time candidate Stevens was unchallenged for the Democratic nomination.

Information posted on the Iowa Secretary of State’s website explained in detail the required nominating papers and affidavit of candidacy for the special election, noting the deadline of 5:00 pm on Friday, June 2.

Somehow, the urgency of submitting those materials was lost in translation.

At 3:12 pm on Friday afternoon, Secretary of State Paul Pate posted on Twitter a list of candidates for the special election, which did not include Stevens:

Shortly after the deadline passed, Pate announced the final list of candidates whose names will appear on the ballot: Republican Jon Jacobsen, Libertarian Bryan Jack Holder, and no-party candidate Carol Forristall. Greg Forristall’s widow had sought the GOP nomination but fell short at the special convention.

When I spoke to Stevens by phone on June 3, he was adamant about taking all the blame for the failure to turn in his nominating papers on time: “Being a novice at this, I dropped the ball,” “I’m not going to blame anybody but myself,” “I’ll take full responsibility,” “I will not put that on anybody,” and so on. He said he “went to work the next day” after being nominated–“I still work for a living, I have responsibilities.” (Stevens is director of facilities and grounds at the Council Bluffs Water Works.)

The candidate declined to say whether county or state Democratic leaders had informed him about the filing deadline or specified what he needed to do to ensure that his name would appear on the ballot. Stevens repeated that he takes full responsibility and emphasized he wanted to be quoted on that.

Stevens will campaign as a write-in candidate for the special election–“I’m not quitting”–and intends to file for next year’s Democratic primary in House district 22. He sees Democrats as “the moral majority, because we care about people their whole life cycle,” and believes he can represent the district well, because he is professional and ethical and doesn’t “put money above people.” In addition, he has a balanced approach to problems, having worked as a labor union member as well as “on the management side” at different times in his career.

No question, Stevens has a strong biography for a state legislative candidate. Yet House district 22 would be an uphill climb for him under any circumstances, with more than twice as many registered Republicans as Democrats in the area.

Someone took the trouble to create a website and Facebook page for the Stevens campaign, and set up an ActBlue page for online donations. Not every candidate for a special legislative election has had that kind of support in the past. But the fundamental task of getting Stevens on the ballot was left unfinished.

In theory, Stevens should benefit from a fractured field of three conservative candidates. Unfortunately, he and his volunteers now must not only GOTV for a summer election, but also educate voters about how to write him in. Filling in the oval next to the Democratic candidate is much easier than remembering which name to write on an empty ballot line.

Republican overreaches in Washington and the state legislature have inspired thousands of Iowa Democrats to become more politically engaged this year than ever before. After Forristall went unchallenged for five straight election cycles, it’s encouraging to see a Democrat run for the state House here. The party needs to compete for votes in every corner of Iowa.

Longtime Democratic activists should (and for the most part do) welcome everyone willing to help rebuild the party from the ground up. But they shouldn’t take for granted that political newcomers know how to navigate the system. Some experienced Pottawattamie County Democrat should have made sure Stevens left the May 30 convention with a plan for completing his nominating papers and turning them in. A county leader or Iowa Democratic Party staffer should have checked in with Stevens on May 31 or June 1 to confirm things were on track to get his papers to the Secretary of State’s Office.

The good news is, Democrats have time to learn from this mistake and prevent something similar from happening next year.

UPDATE: A reader says Stevens was told on May 30 that nominating papers had to be mailed Wednesday and asks, “Do you have evidence that it wasn’t stressed to him?” No, I don’t, because Pottawattamie County Democratic Party chair Linda Nelson (see update below), and Stevens didn’t want to talk about it. My point stands: someone with more political experience should have followed up and, if necessary, made arrangements to hand-deliver the nominating papers by Friday afternoon.

Holder comments, “And for the record I’m not a ‘conservative’, I’m a Libertarian who believes in Liberty and Justice for all- not just some of us.” I suspect that in this race Holder would help split the conservative electorate, especially since he ran in last year’s GOP primary for this Iowa House seat.

SECOND UPDATE: Nelson did answer my questions a few hours after I published.

Ray had someone giving him full attention in walking him through the process of filing nomination papers with the Secretary of State’s office. On Tuesday night we did have someone here on the ground from our state organization making certain that we were following the party guidelines in conducting our business of the special nominating convention. At the conclusion of the convention, the staffer gave Ray Stevens the paperwork to complete, in essence a sheet of paper that needed his signature in front of a Notary, as well as the Notary’s seal and initials. It was made very clear to Ray that this was top priority and needed to be completed and in the mail no later than Wednesday evening. When the state staffer checked on Ray, Ray said he put it in Thursday nights U.S. Mail, not getting to the Secretary of State’s office by the close of business on Friday. Most unfortunate. Many, many Democrats from across the region and from our local are still making plans to continue door knocking and phone calling, now to have a “write in” effort for Ray Stevens.

Someone should have called Stevens on Wednesday night to confirm that he had mailed the papers. If not, then he should have been instructed not to put them in the mail on Thursday after work. A volunteer could have been found to pick up the packet and drive it to Des Moines (only about two hours from Council Bluffs) by Friday afternoon.

JUNE 5 UPDATE: The Stevens campaign is educating voters that they need to fill in the oval as well as write in the candidate’s name on the special election ballot. Writing in “Ray Stevens” while leaving that oval blank may not be recorded as a vote for the Democratic candidate. 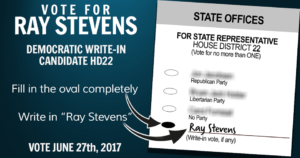