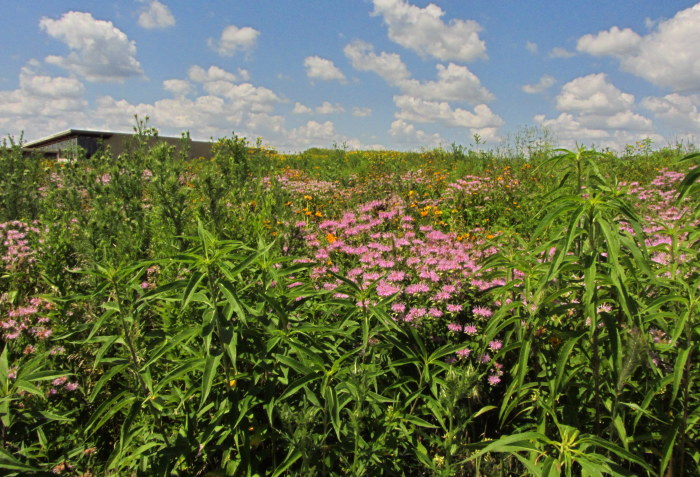 I used to visit the Neal Smith National Wildlife Refuge near Prairie City several times a year when my children were younger, and when I regularly drove between Des Moines and Pella. But I hadn't been there for more than a year until this week. Old friends vacationing from the east coast had heard of the place and share my love of native plants, so we spent half a day in the Prairie Learning and Visitor Center and on one of the nearby walking trails.

You can easily spend an hour or two in the center, watching a short film about the tallgrass prairie and checking out the permanent exhibits on plants and animal life. If you're lucky, you may be able to see some of the bison herd from a large window overlooking part of the refuge. Volunteers staff the Prairie Point Nature Store, which has a fantastic collection of books (for children as well as adults), toys, t-shirts, postcards, and other small gifts. There's no cafe or restaurant, but you can bring your own food and eat in the lunchroom.

On to the main attraction...

The center was designed to be unobtrusive. From many vantage points within the refuge, you can't see the building at all. Prairie plantings surround the structure. At any time during the spring, summer, and fall, many flowers will be blooming near the walkway from the parking lot. On August 6, we saw ironweed: 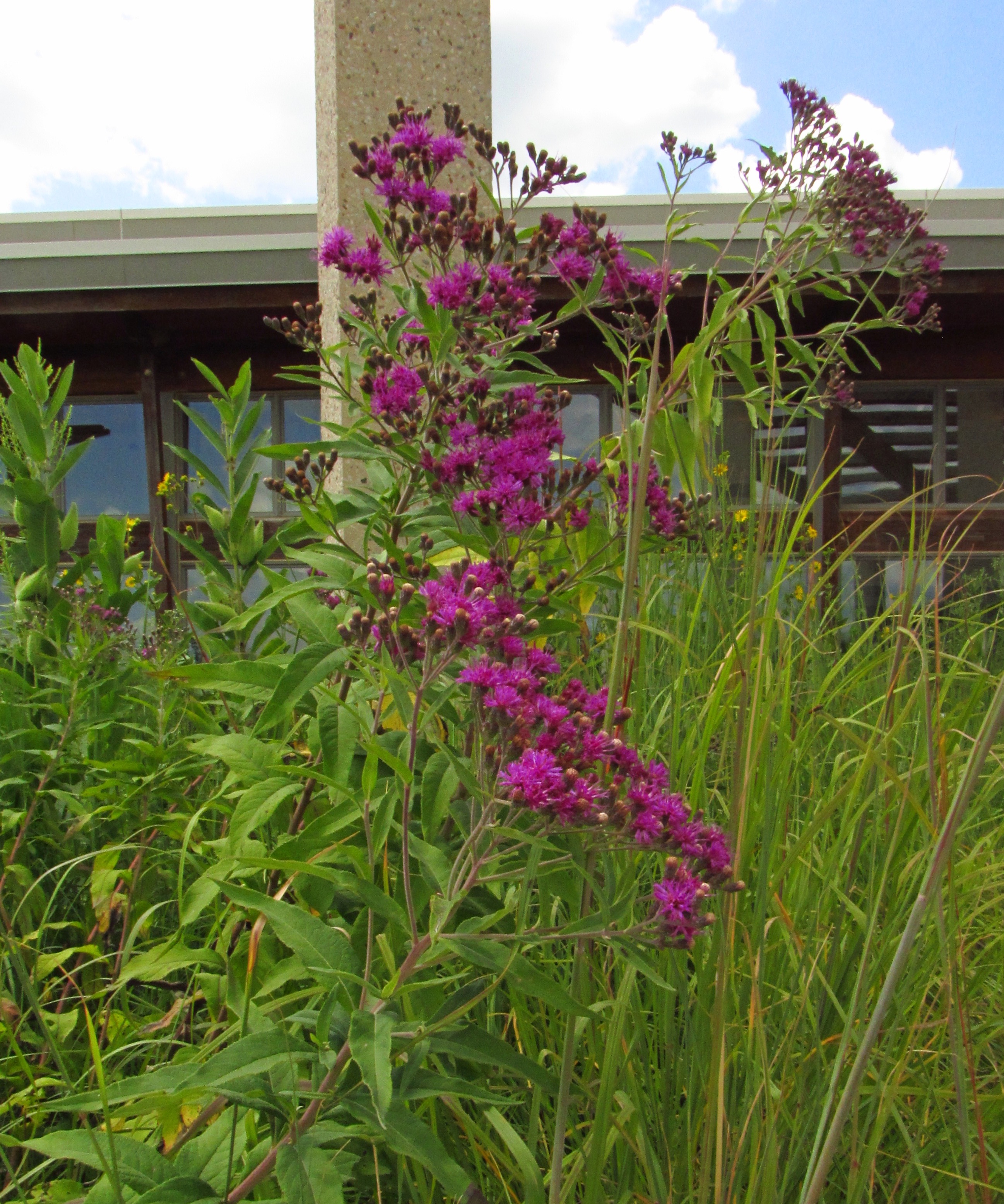 And a fair number of tall thistle plants, only one of which was blooming. 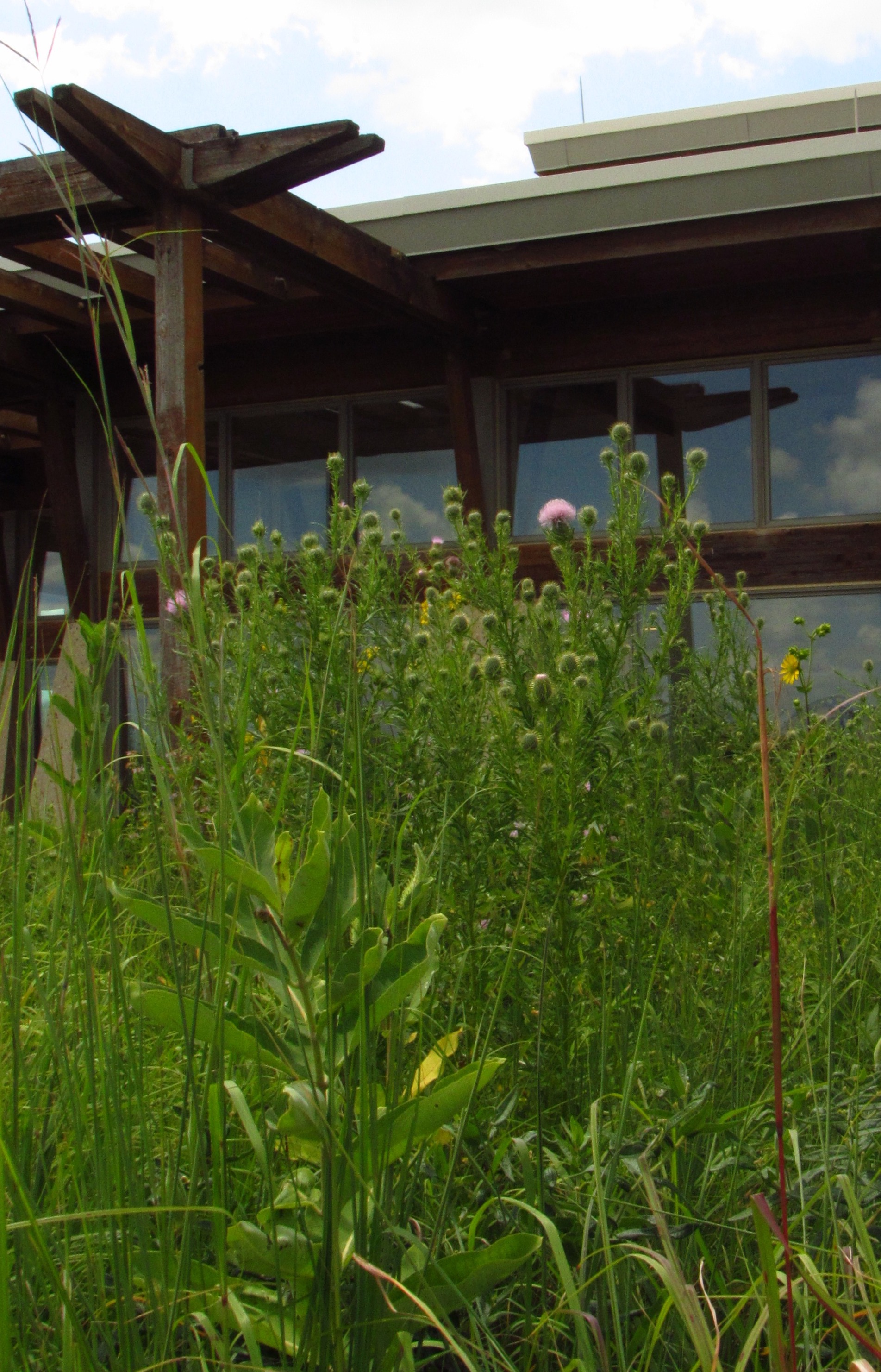 Near the main entrance, a tree shows examples of flowers currently blooming in the refuge. There are also laminated "scavenger hunt" sheets visitors can borrow to help them identify seasonal flowers along the trails. 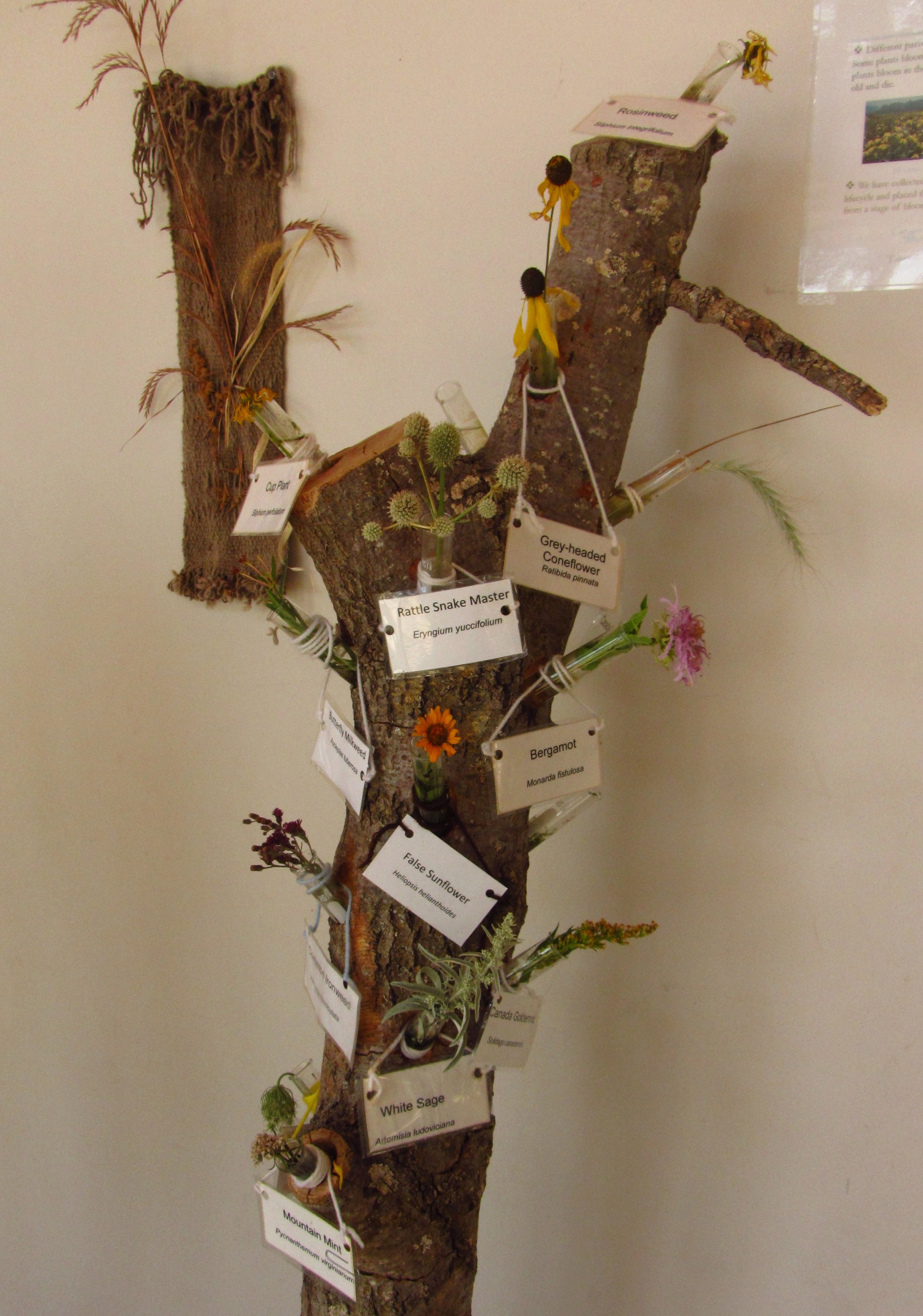 Some remnants of spring and early summer were still visible. This plant with red stems is golden Alexanders, gone to seed. 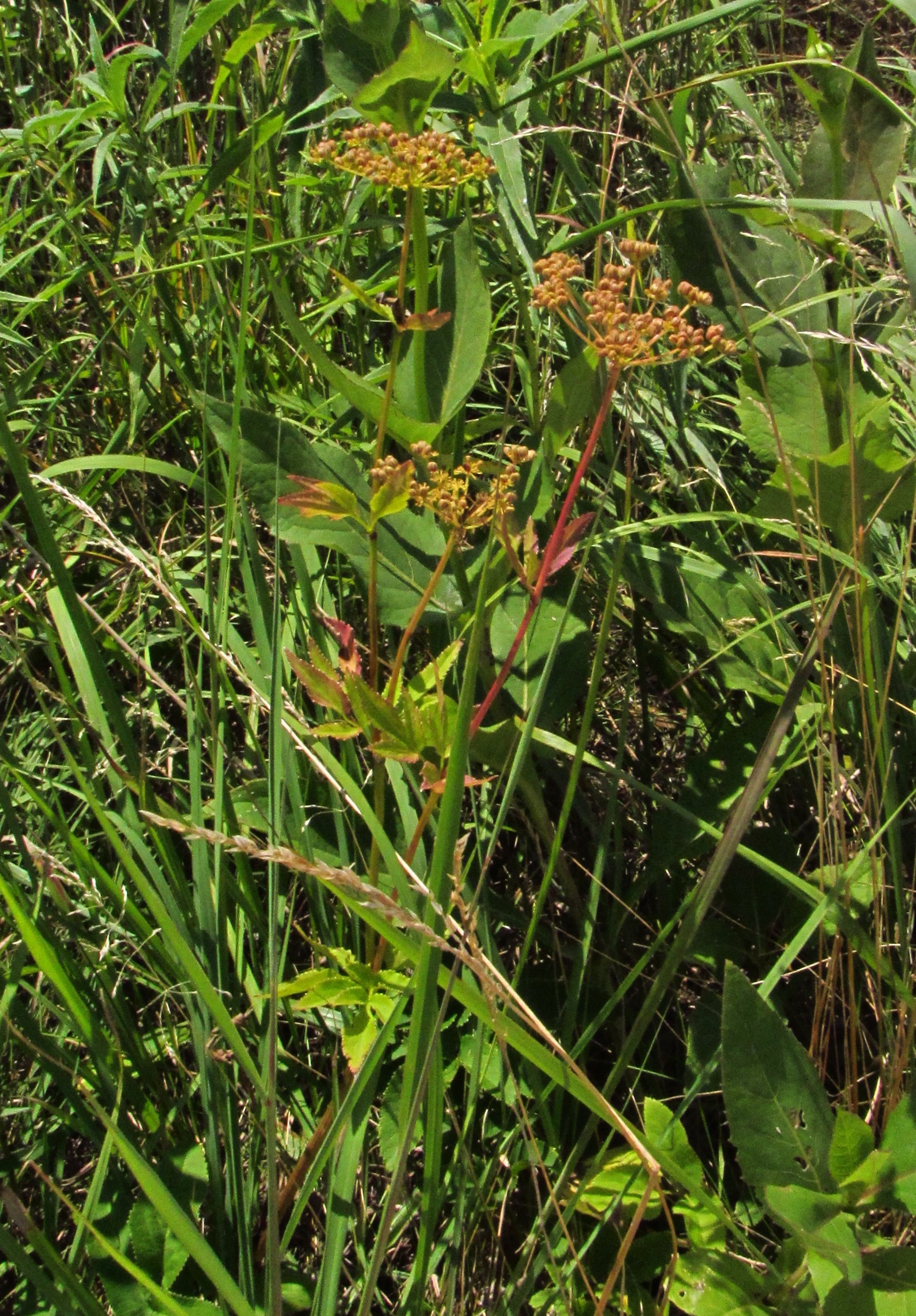 Many common milkweed plants, which bloomed in June, had seed pods forming. 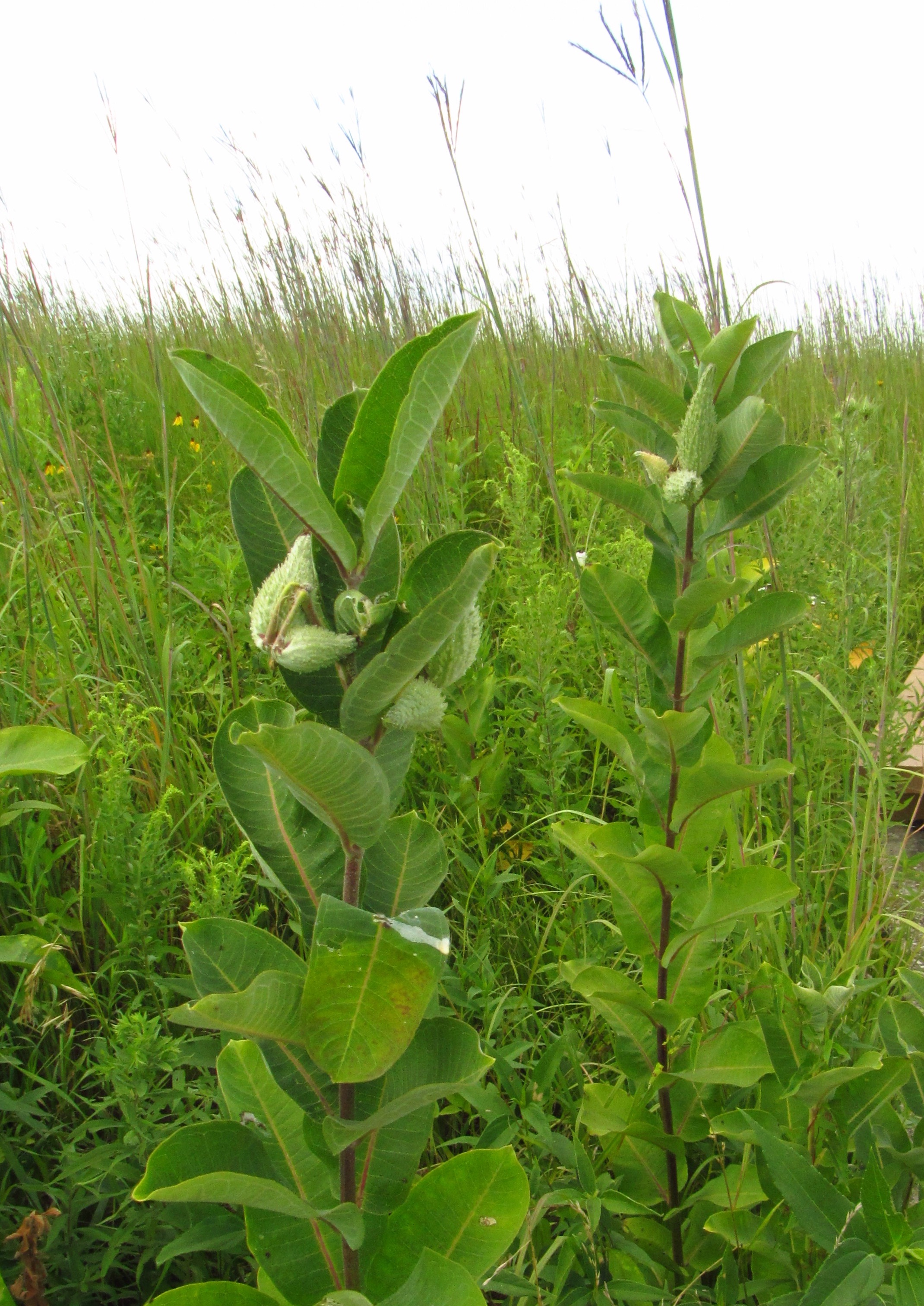 I believe this is a black raspberry cane. 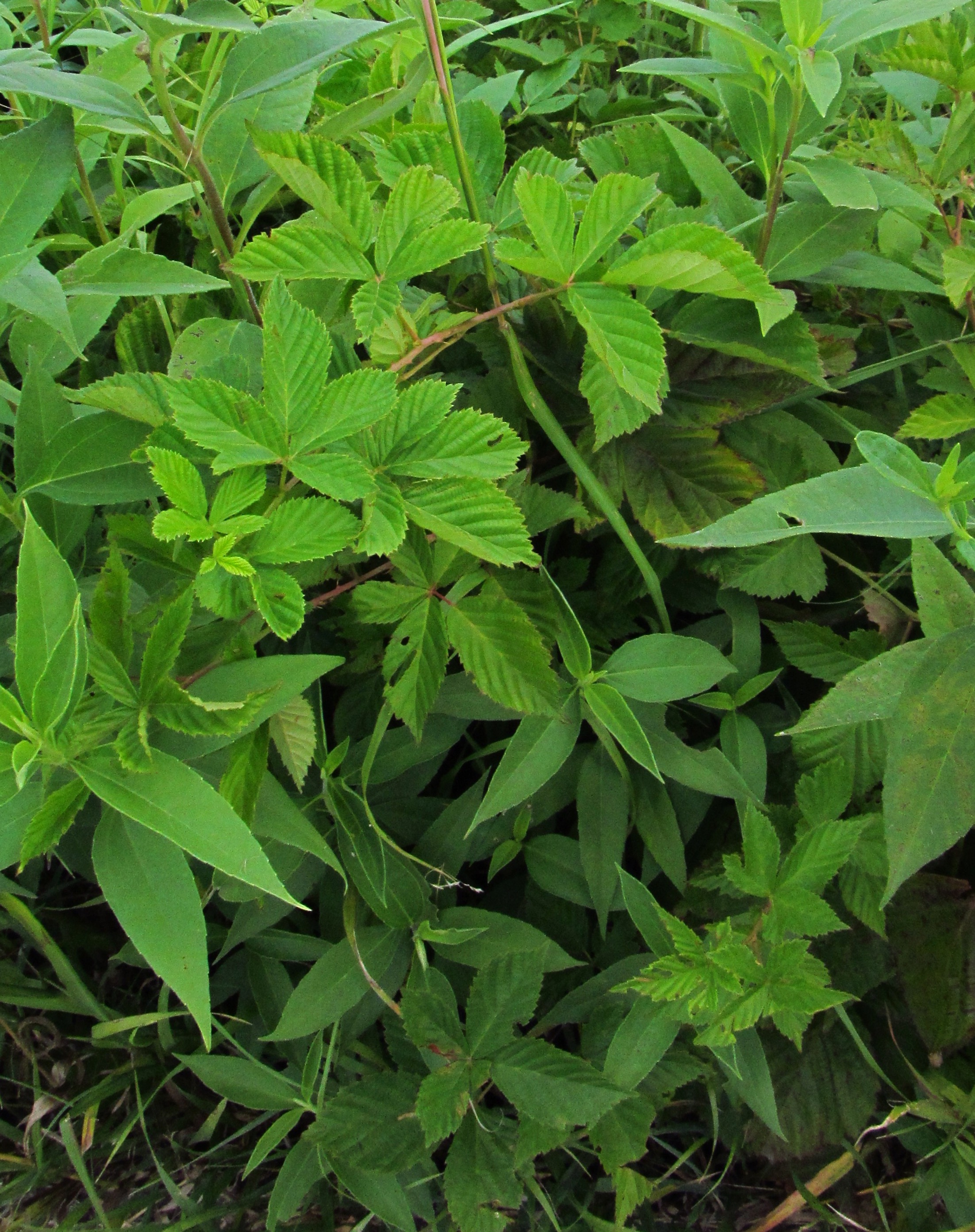 I was surprised to see flowers on one butterfly milkweed plant. These orange flowers are more typical for prairie landscapes in June and July. 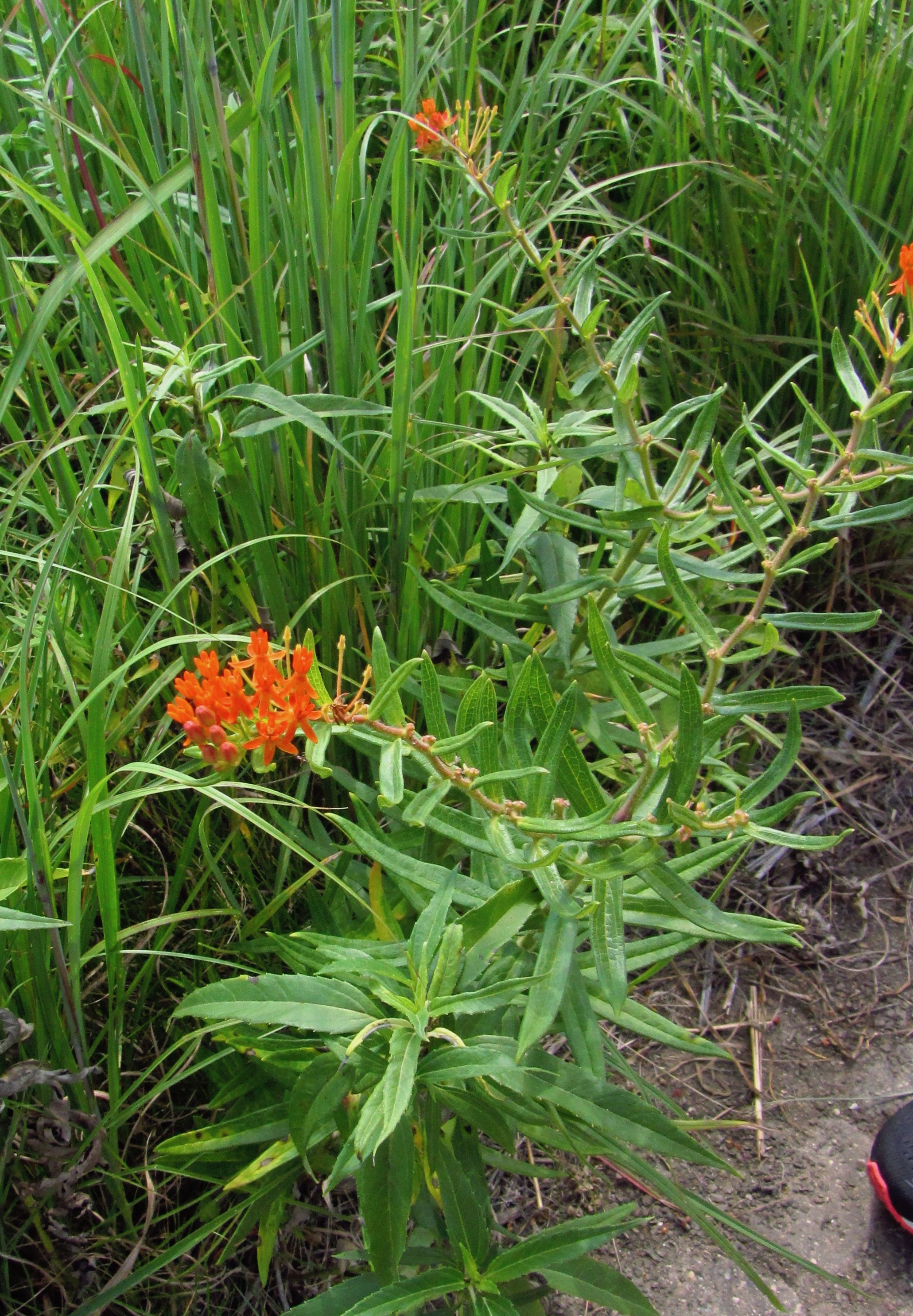 To the upper left of these yellow or gray-headed coneflowers, the seed head of a pale purple coneflower that bloomed weeks ago. 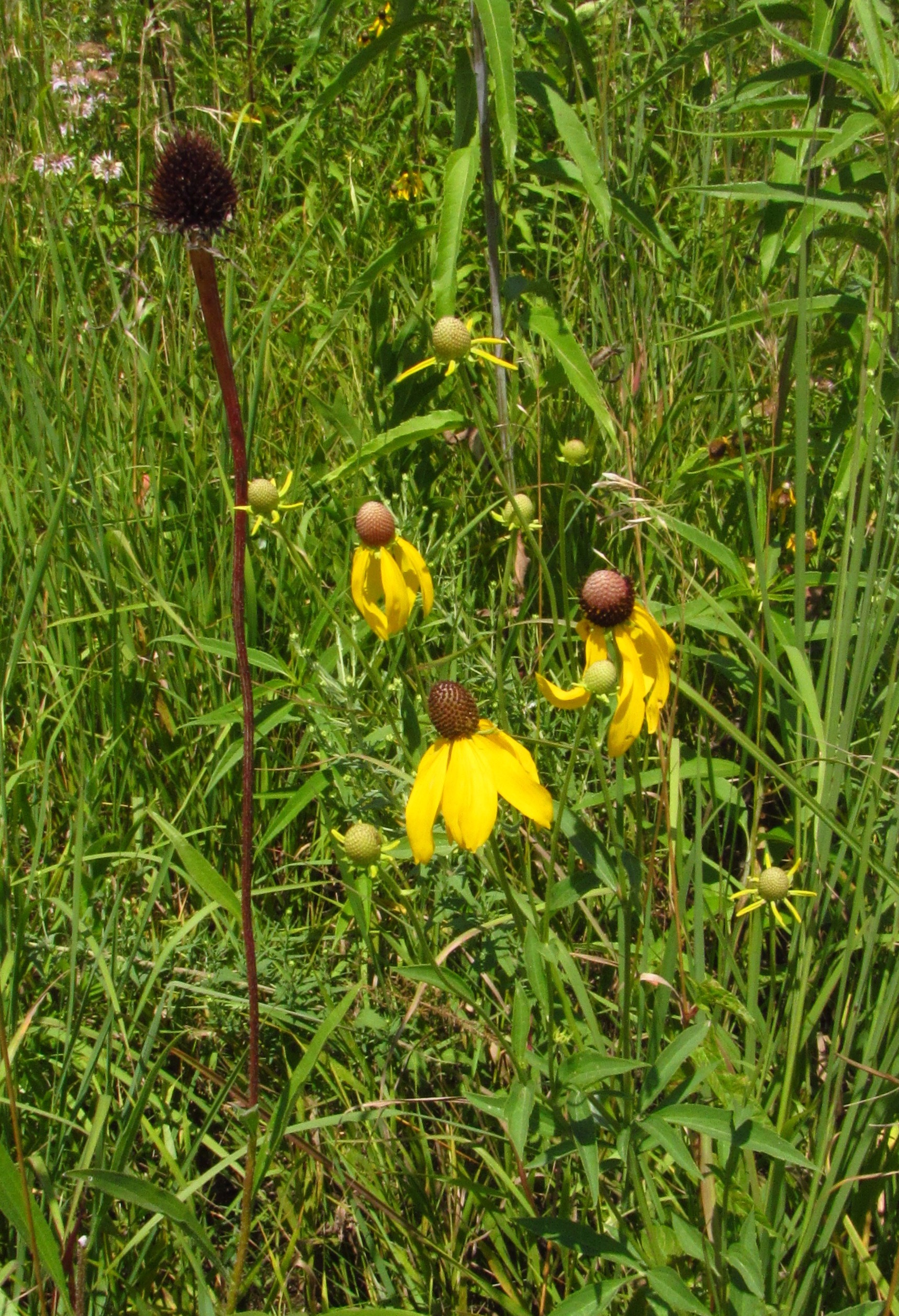 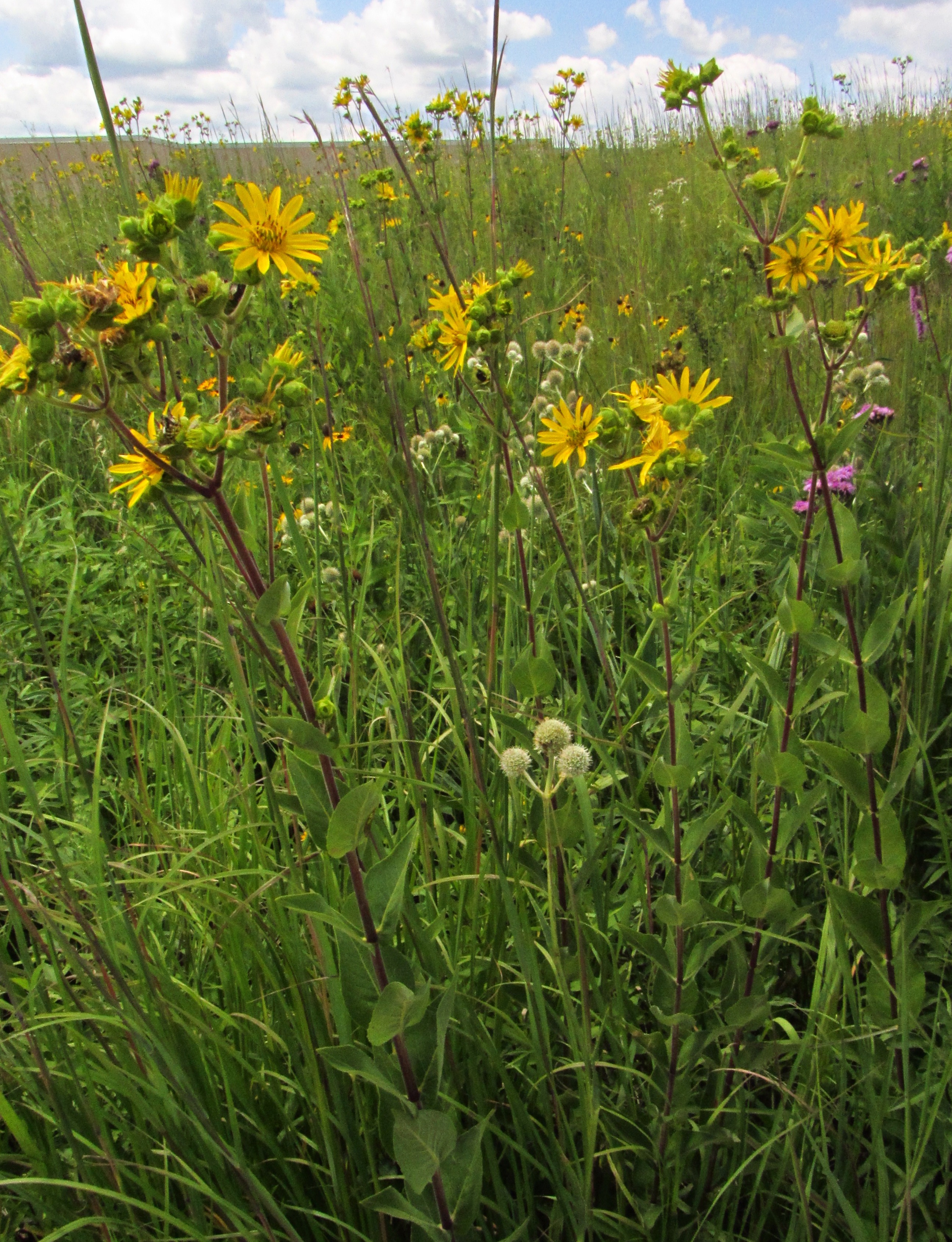 The ironweed makes a striking contrast to the rosinweed. 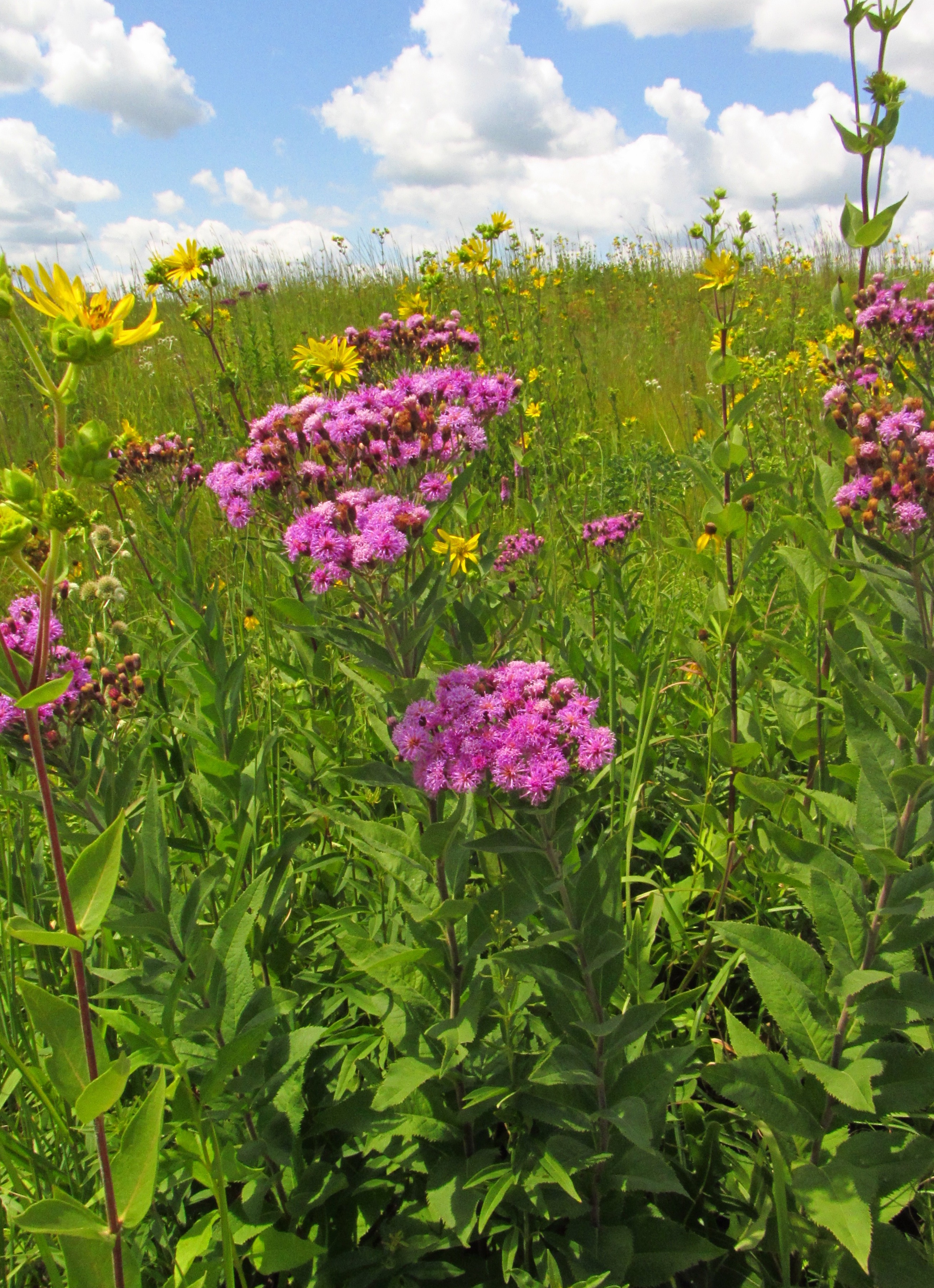 More gray-headed coneflowers, with some cup plants to the right. Rainwater or dew collects in the leaves, creating a water source for insects and birds. 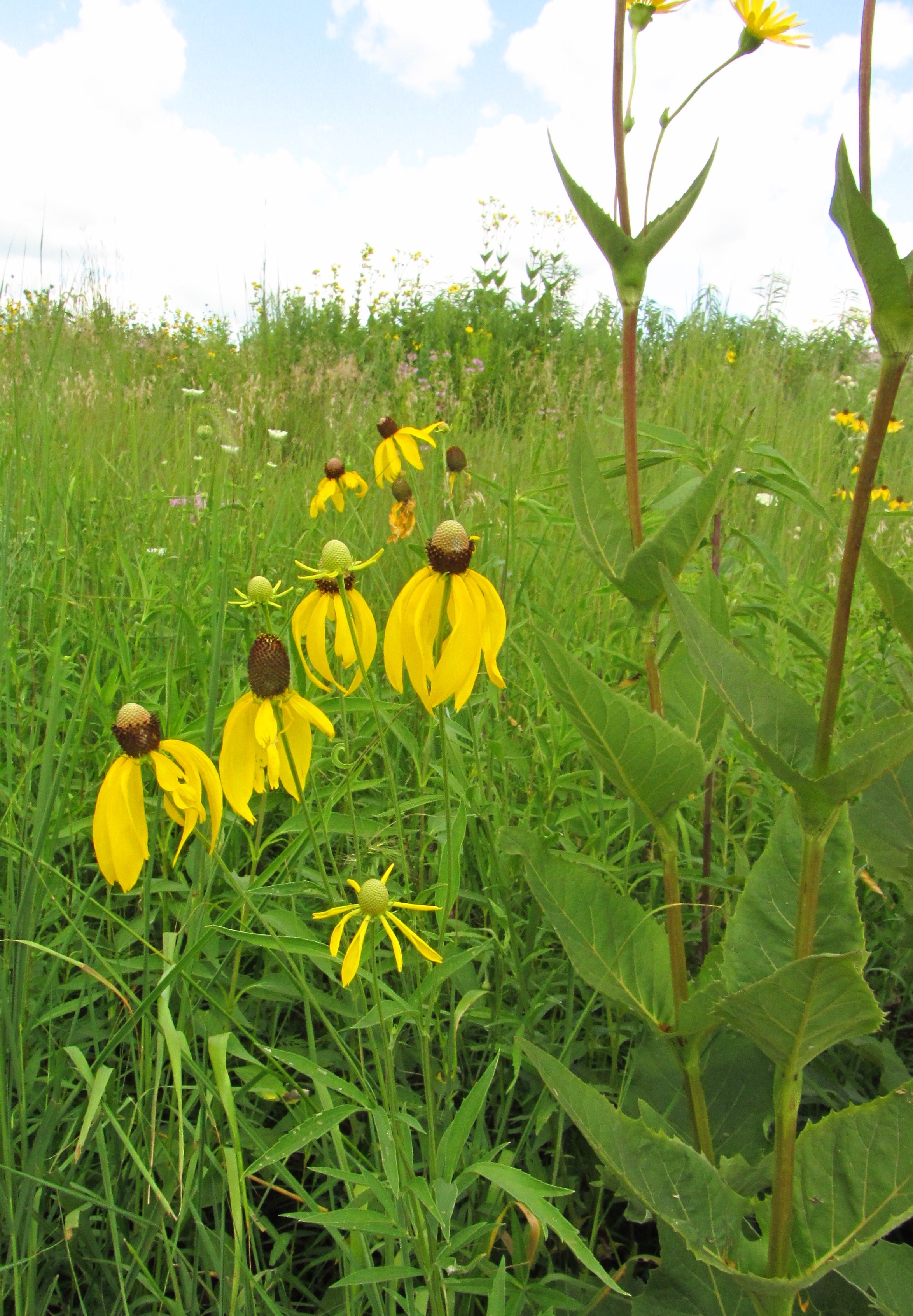 Cup plants can grow very tall, as seen in this picture, with the nature center in the background. 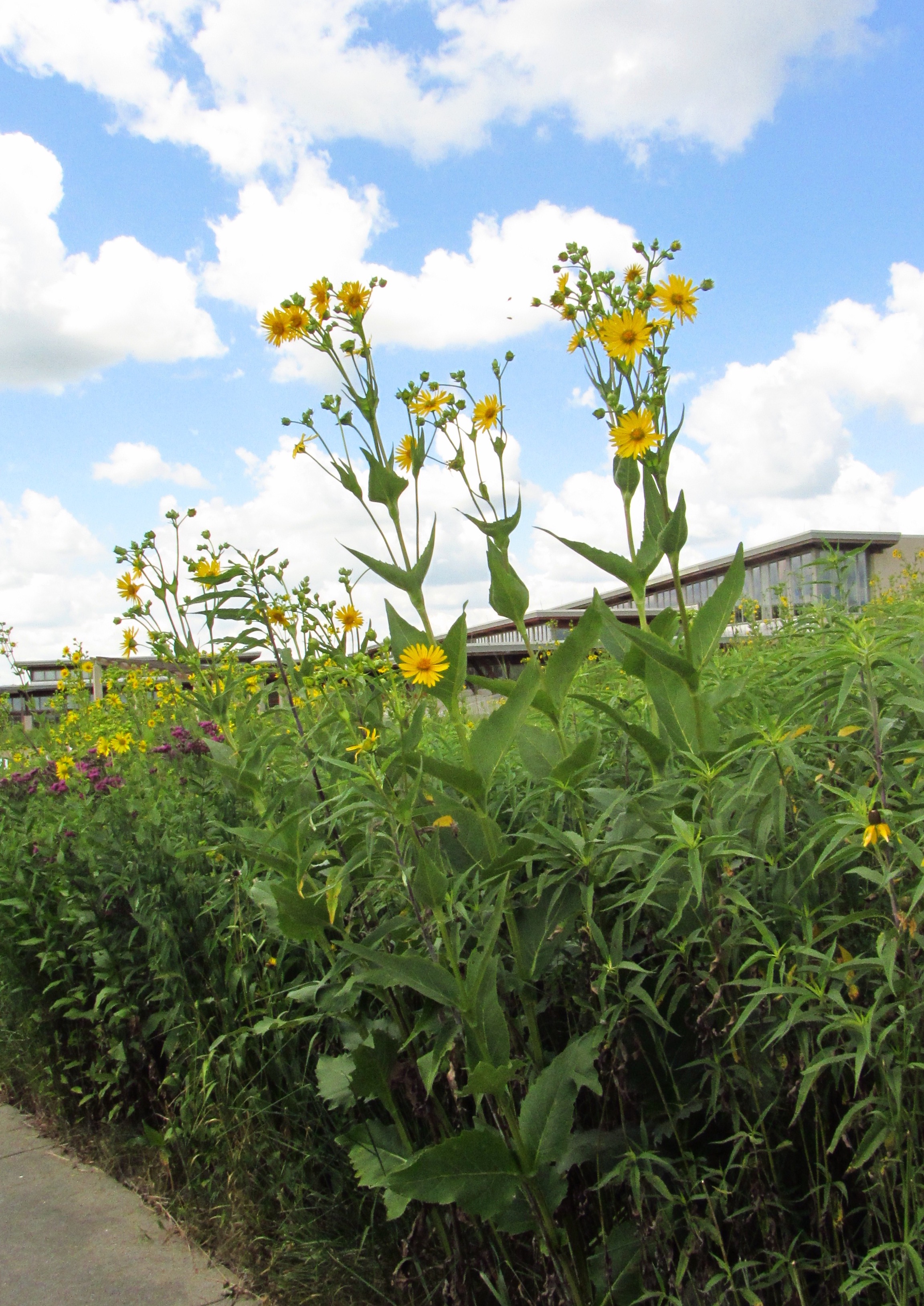 The tallest plant on the landscape this time of year is the compass plant. Sad to say, my camera skills were not up to photographing this specimen in the bright sunlight. 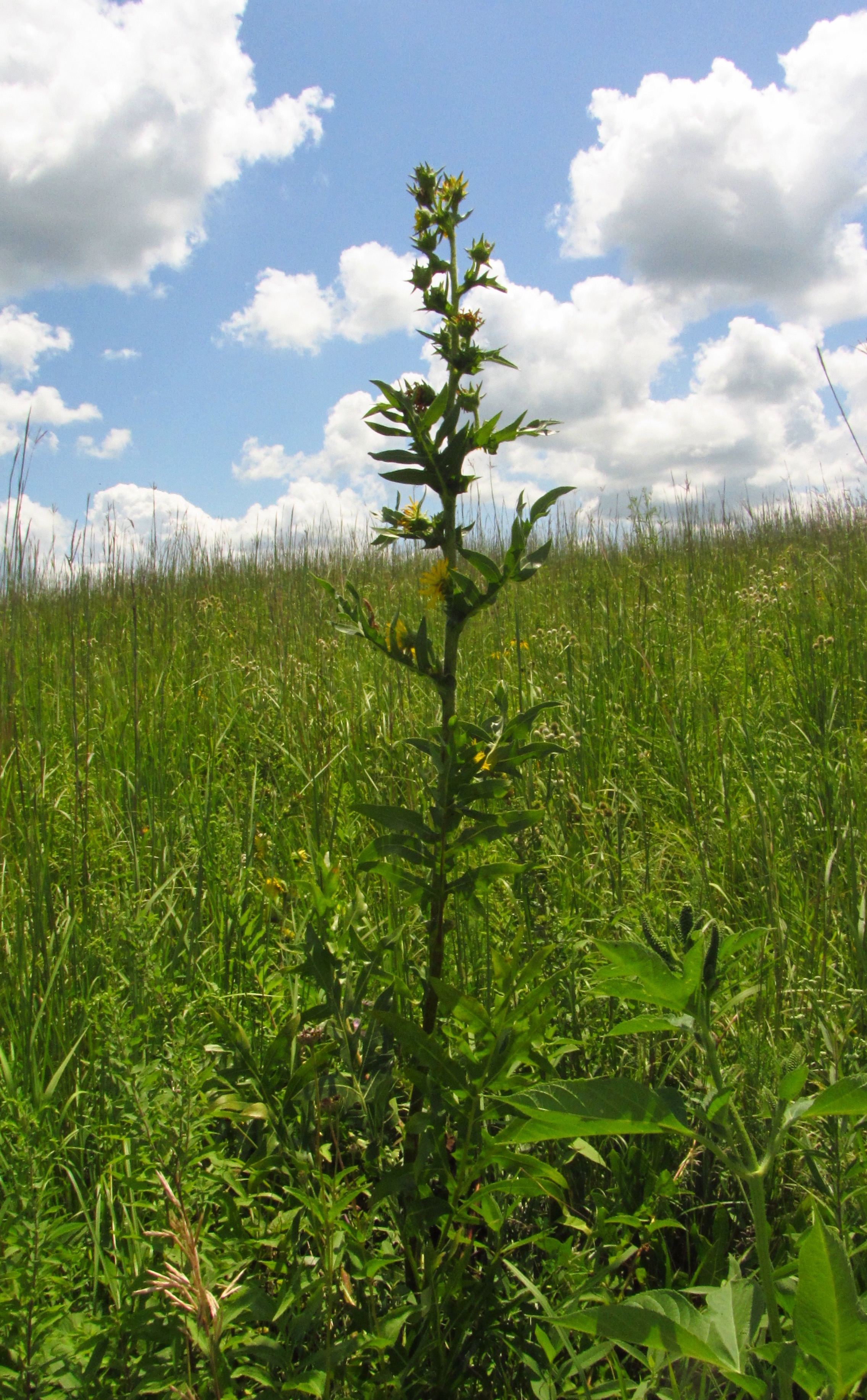 Horsemint, also known as wild bergamot or bee balm, was still going, though some were past their prime. 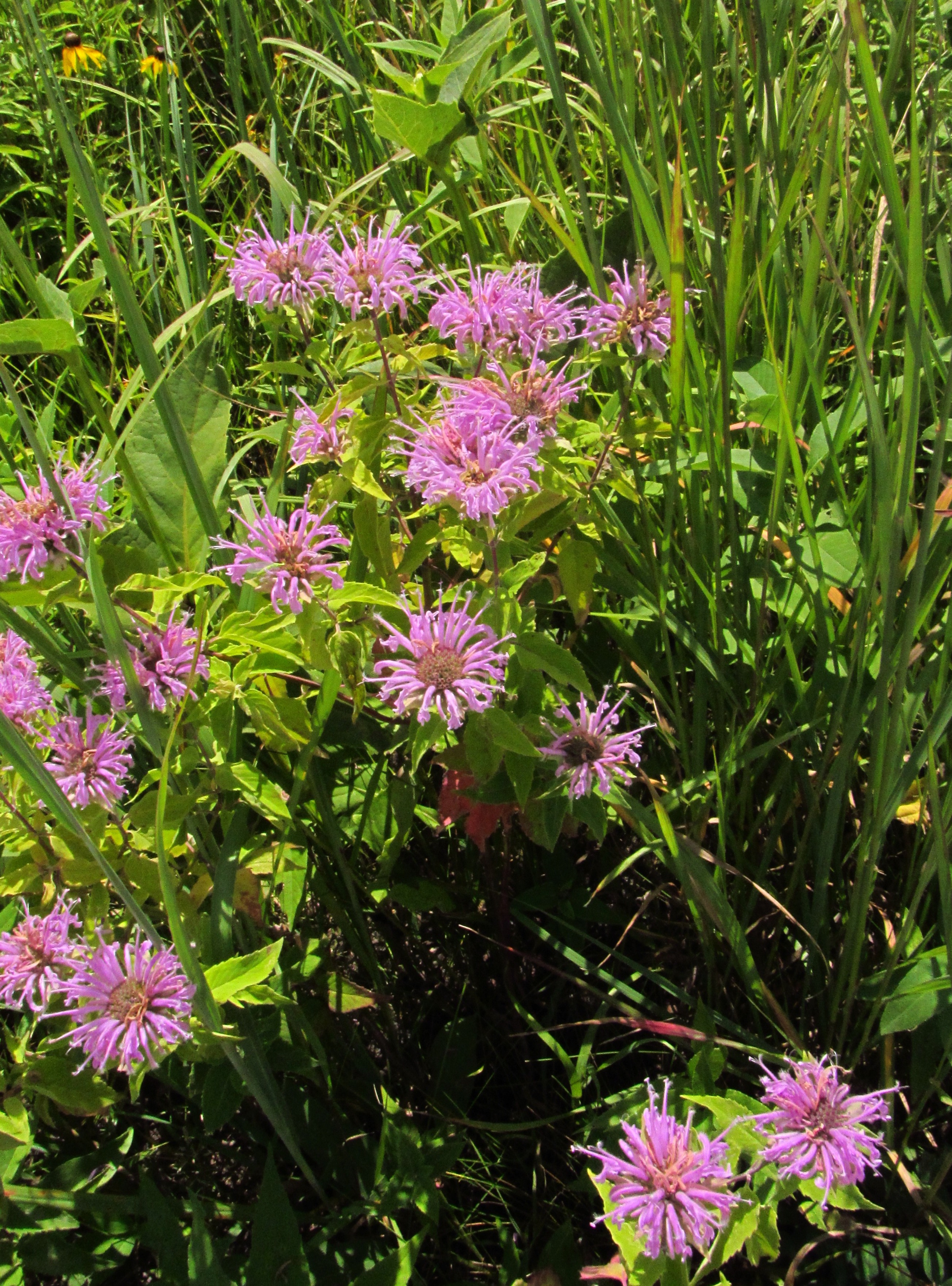 I believe that's wild quinine near the upper right corner of this photo. I didn't want to step off the trail to get a closer look. 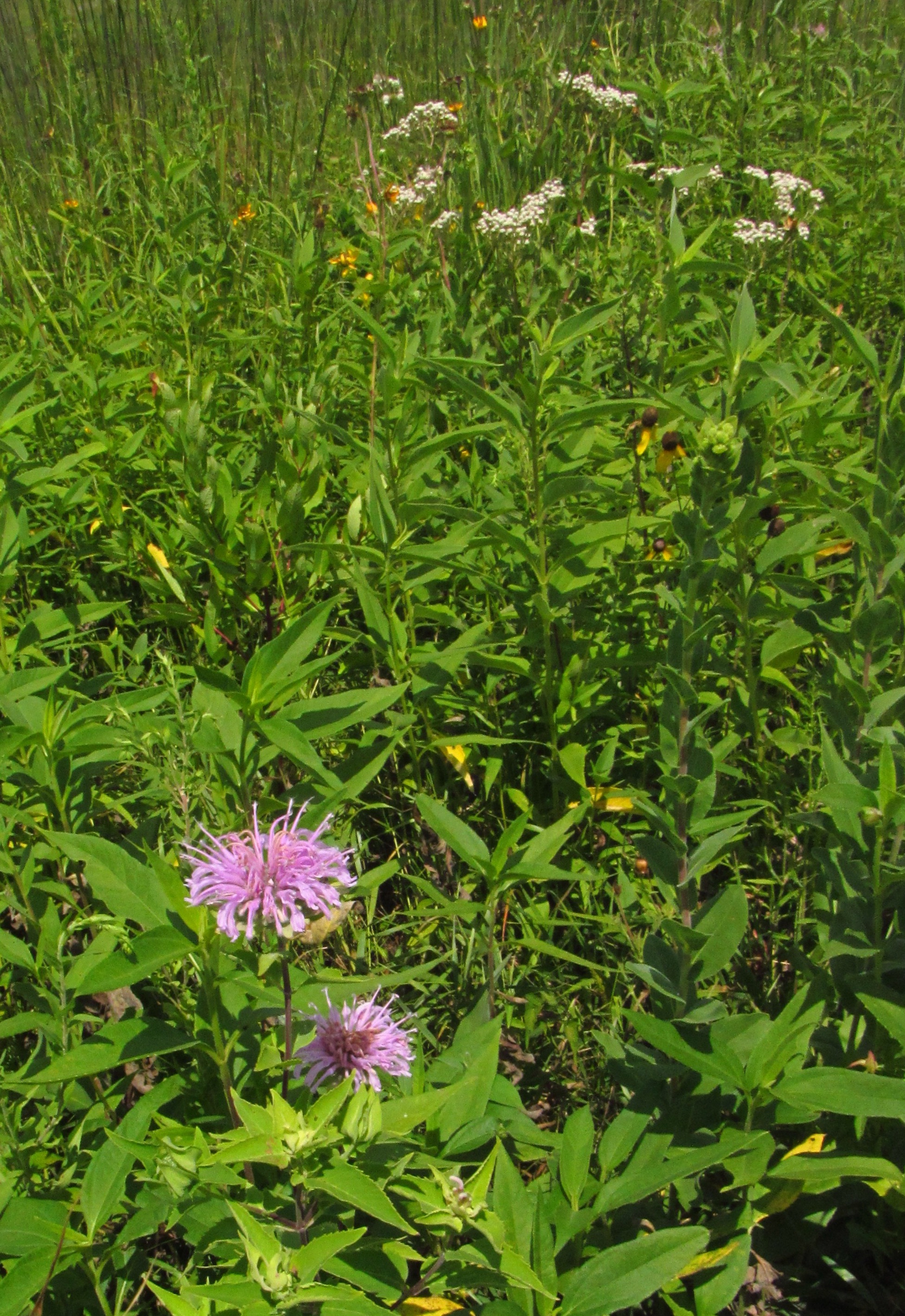 Lower to the ground, it was easy to spot many yellow flowers on partridge pea plants. 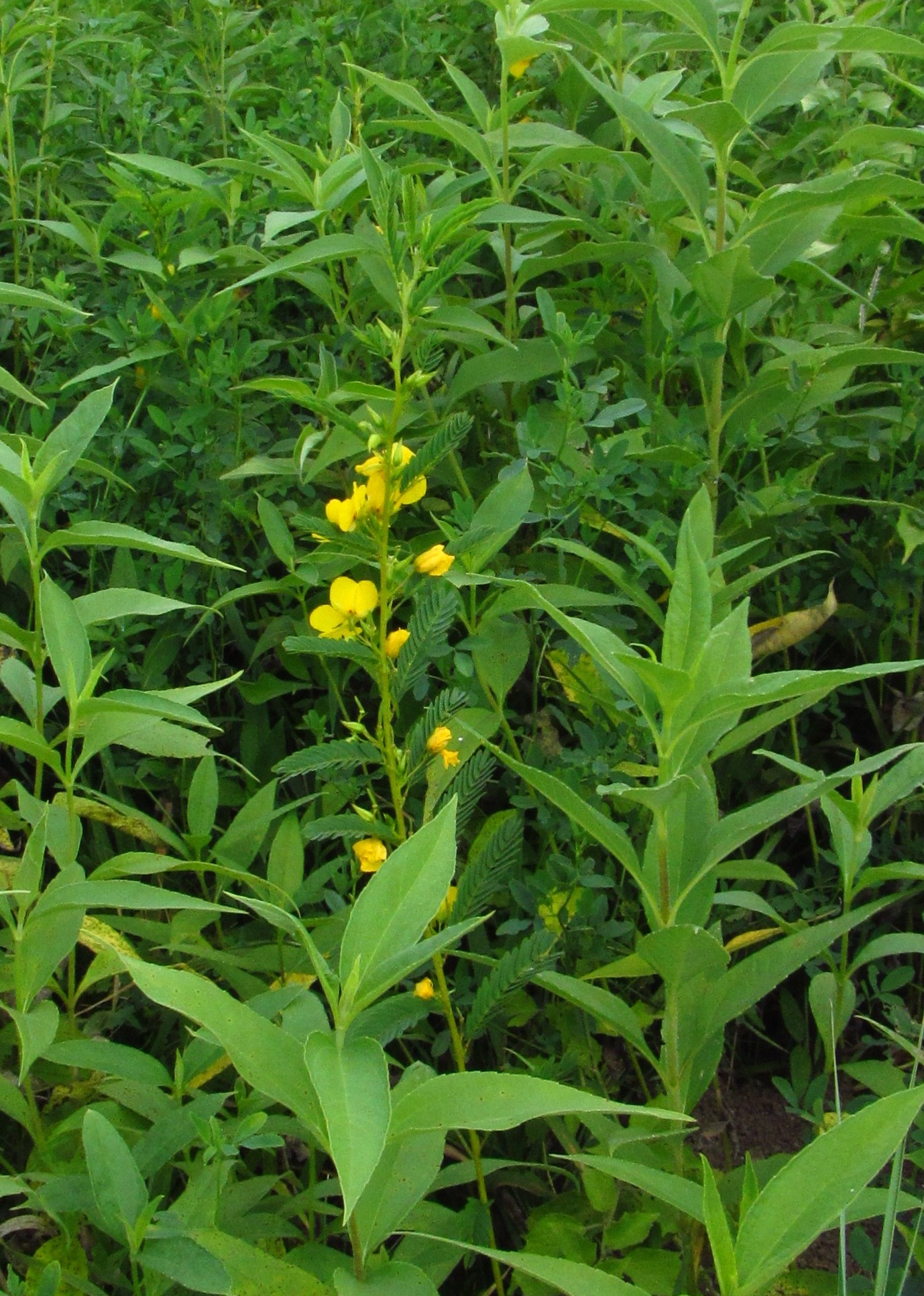 I'm not sure whether these yellow flowers were sweet coneflowers or black-eyed Susans. UPDATE: John Pearson of the Iowa Department of Natural Resources speculated that these are sweet coneflower, because the leaves appear to be lobed. 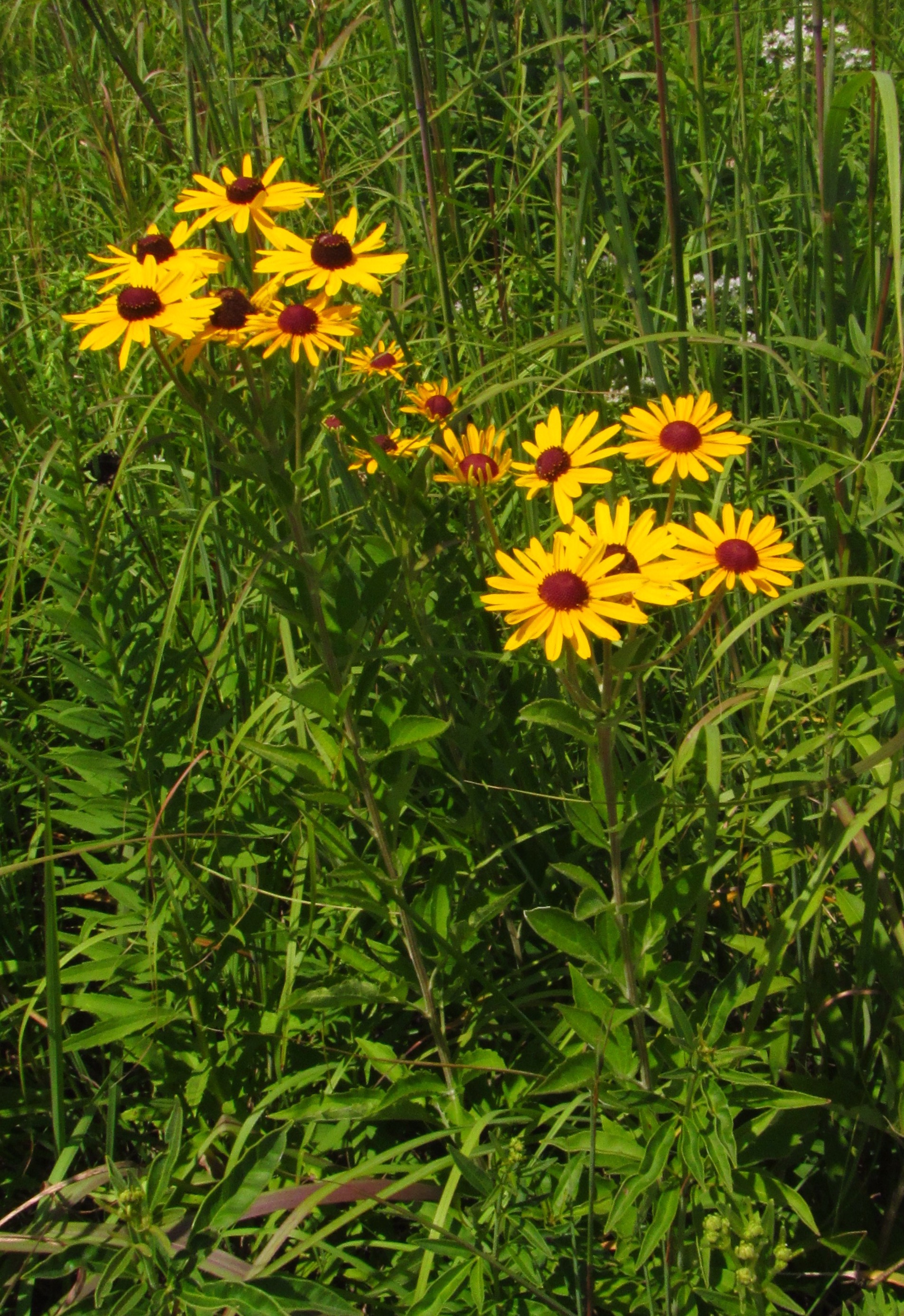 The prairie sage or white sage foliage stood out against other plants nearby. 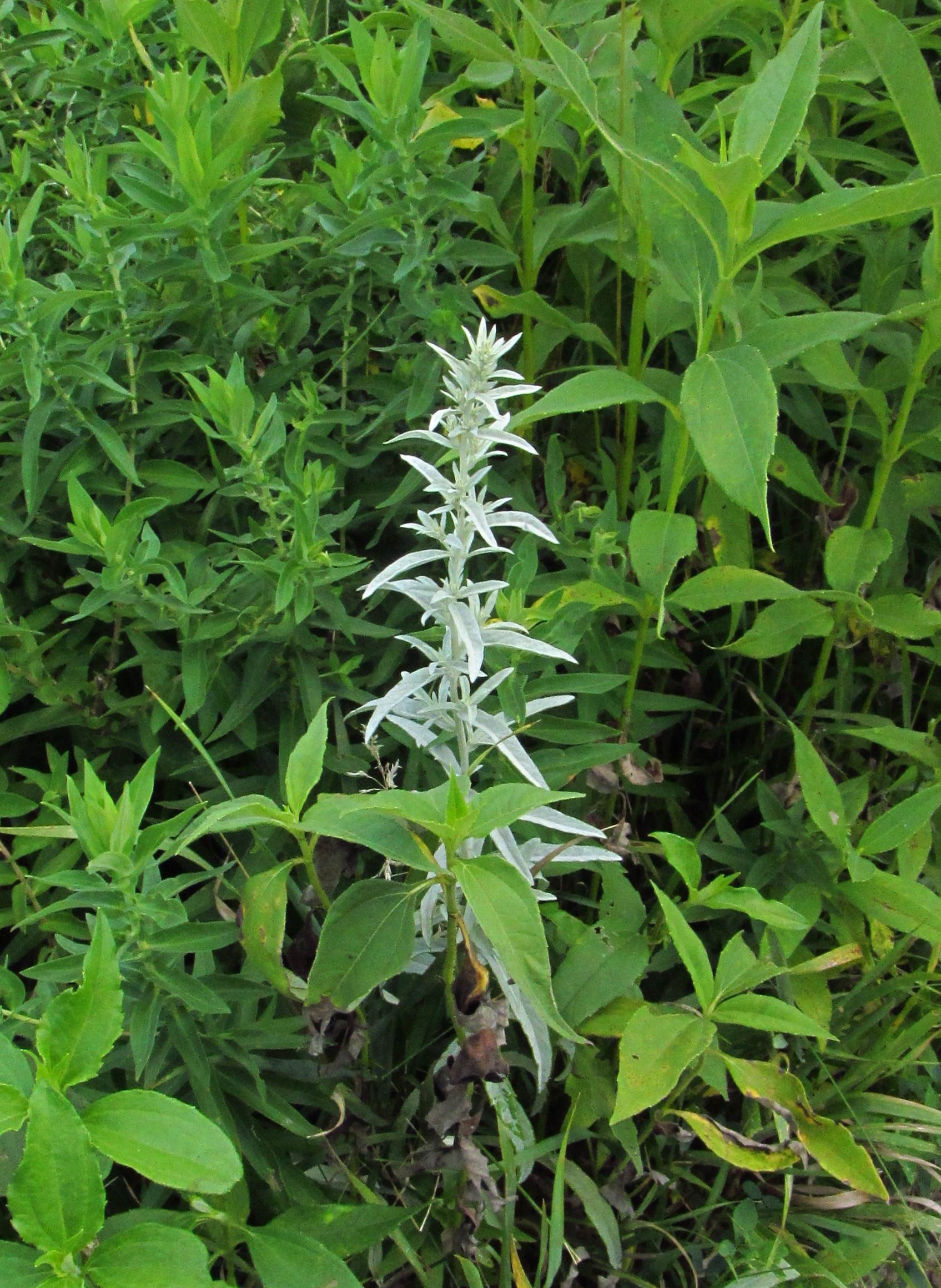 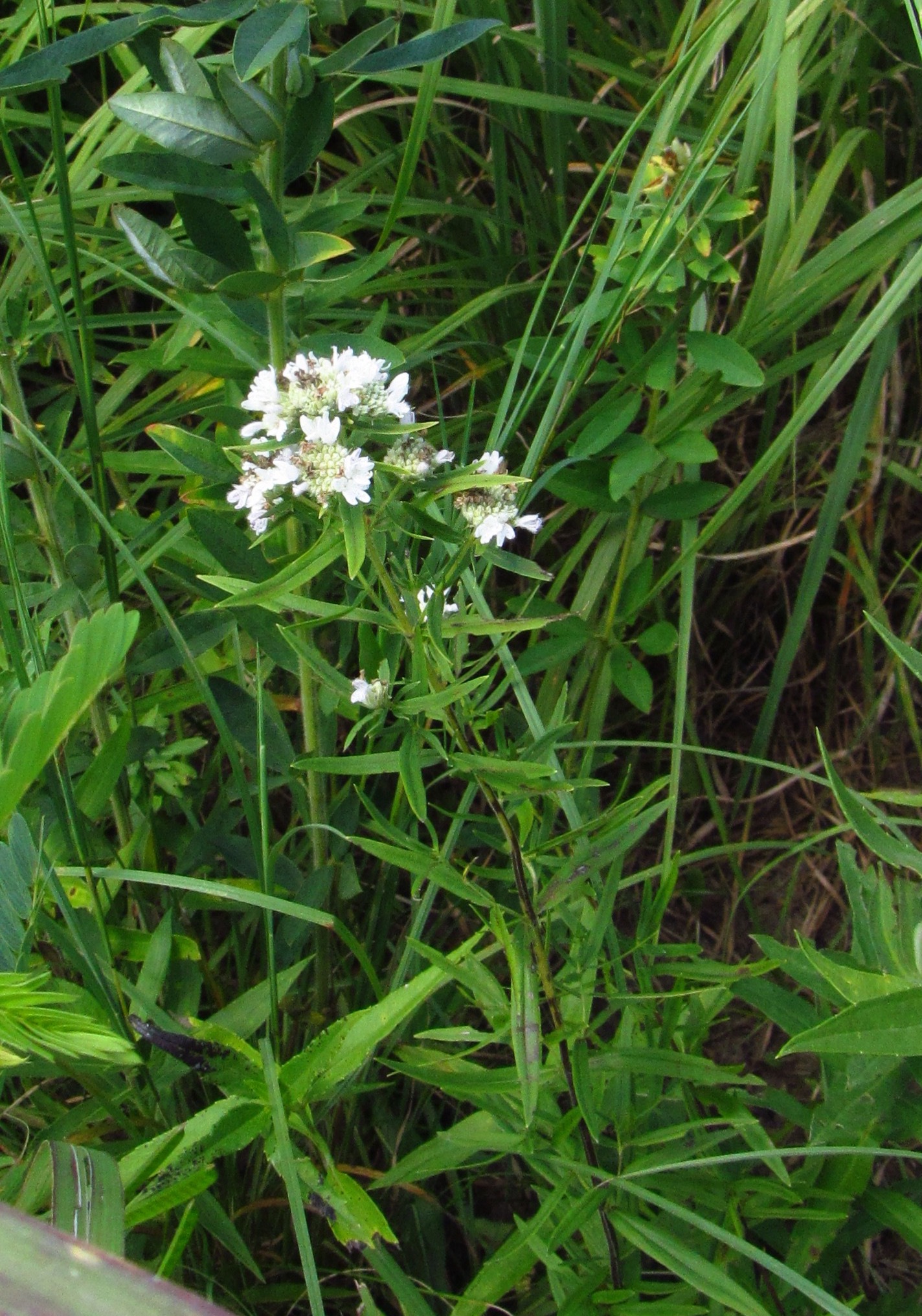 I didn't get any good pictures of the bright pink blazing stars in bloom. A few of them are just starting to flower in the center of this picture. The big bluestem grass catches the eye more. CORRECTION: A reader pointed out that unlike many native plants, blazing stars bloom from the top down. So these are near the end of their flowering phase. 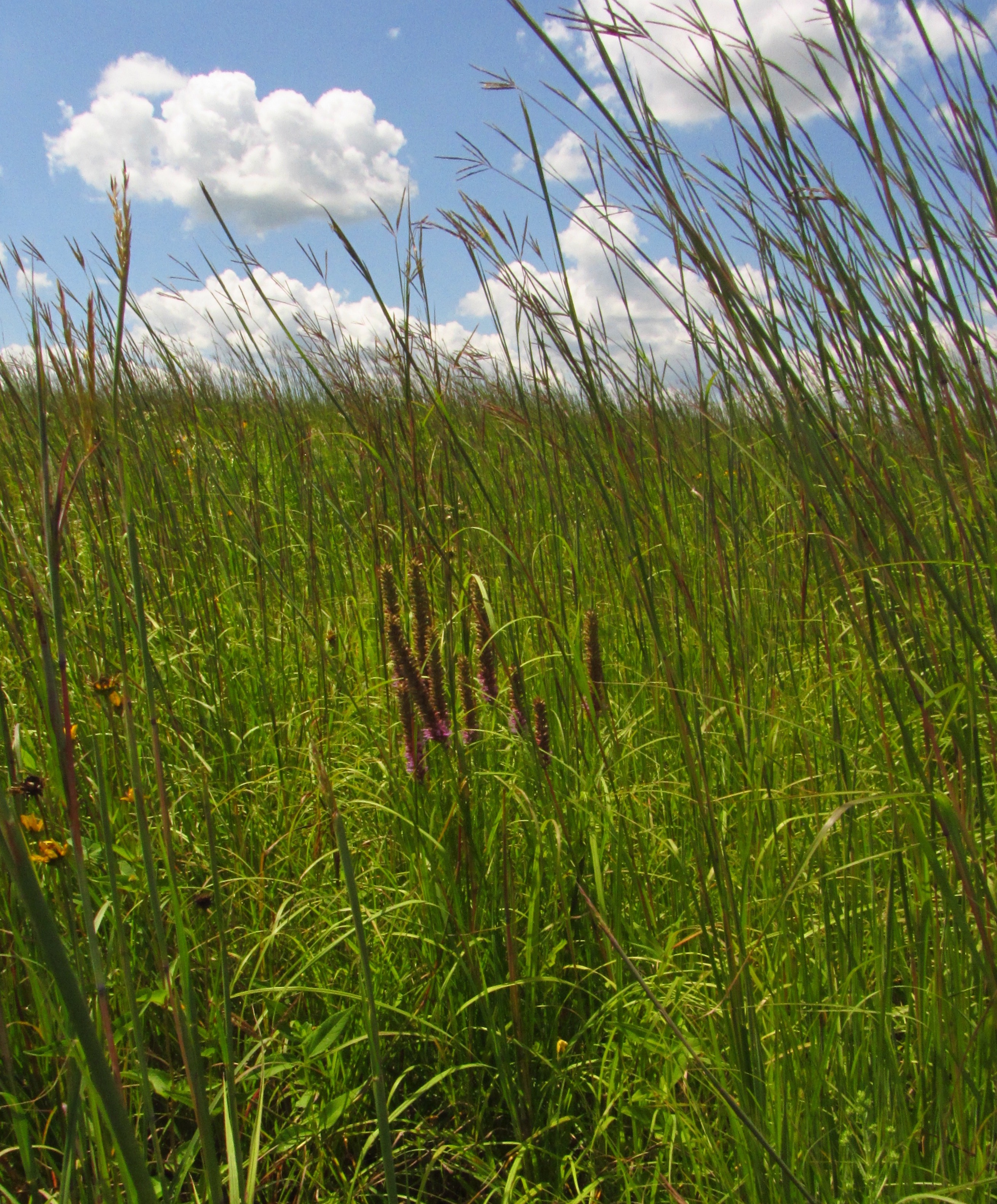 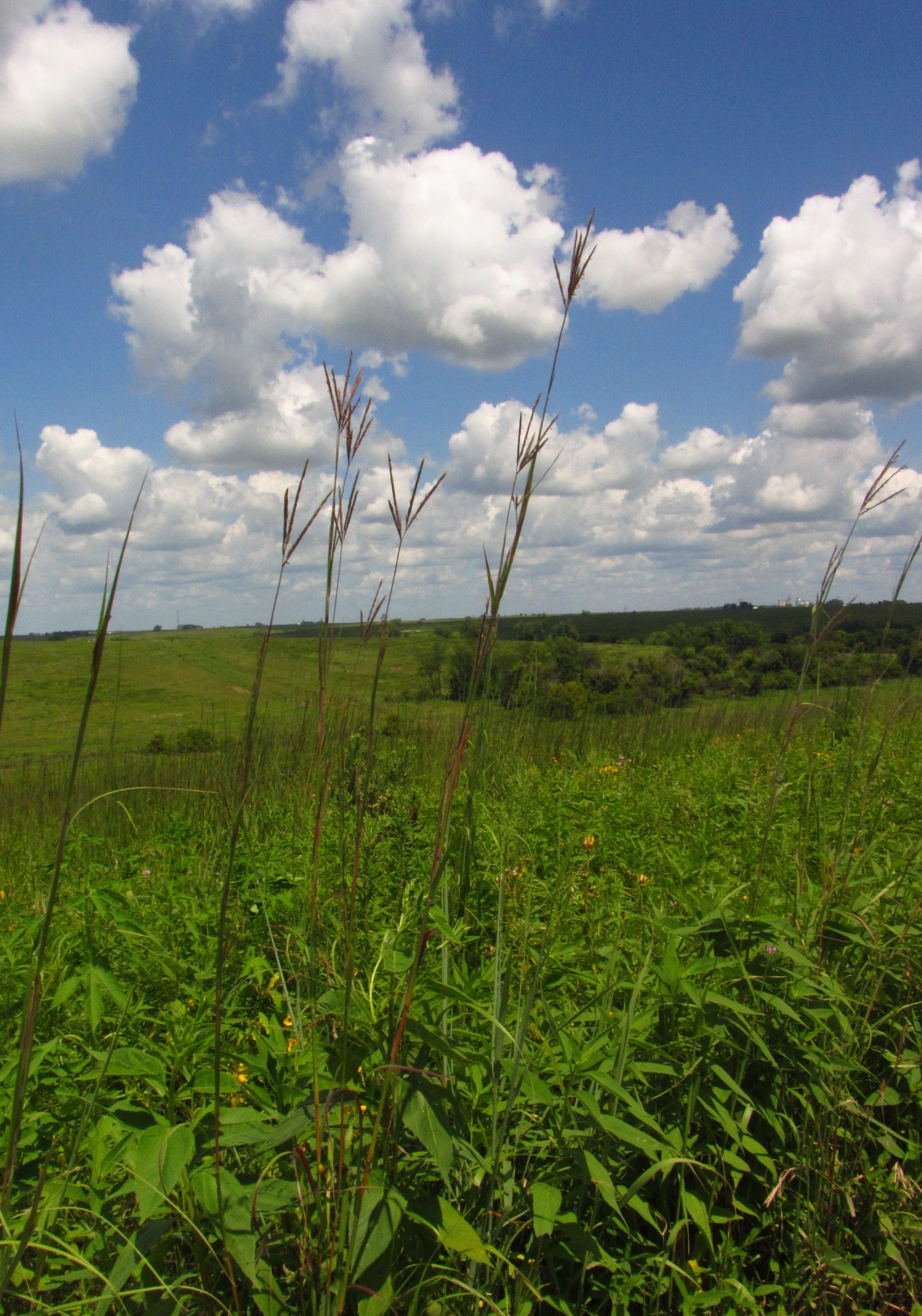 One of the tallest ragweed plants we saw on Tuesday. 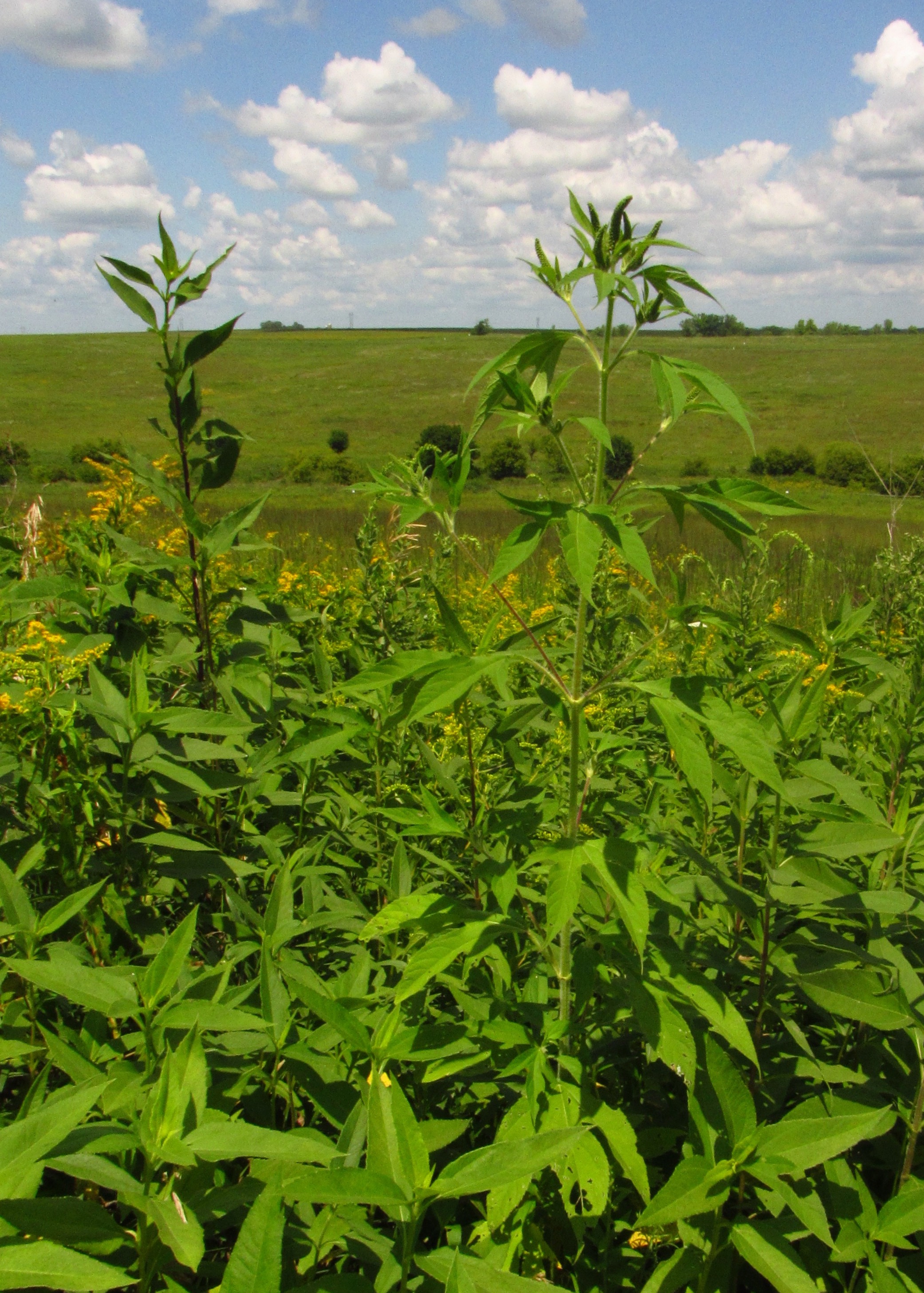 On the other end of the height spectrum, an unusually short ox-eye (false sunflower) was blooming. 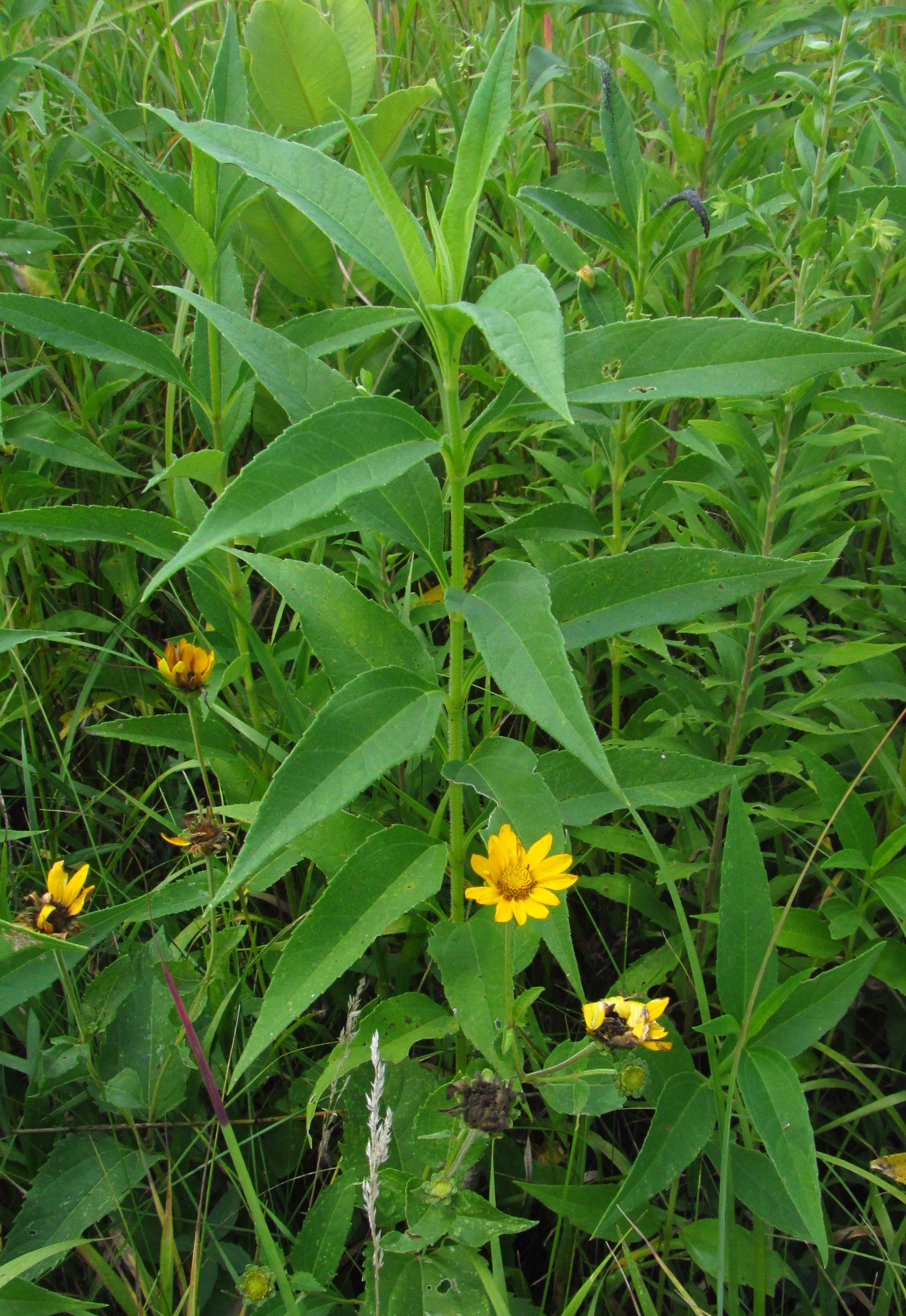 This goldenrod was one of the first I've seen flowering this year. 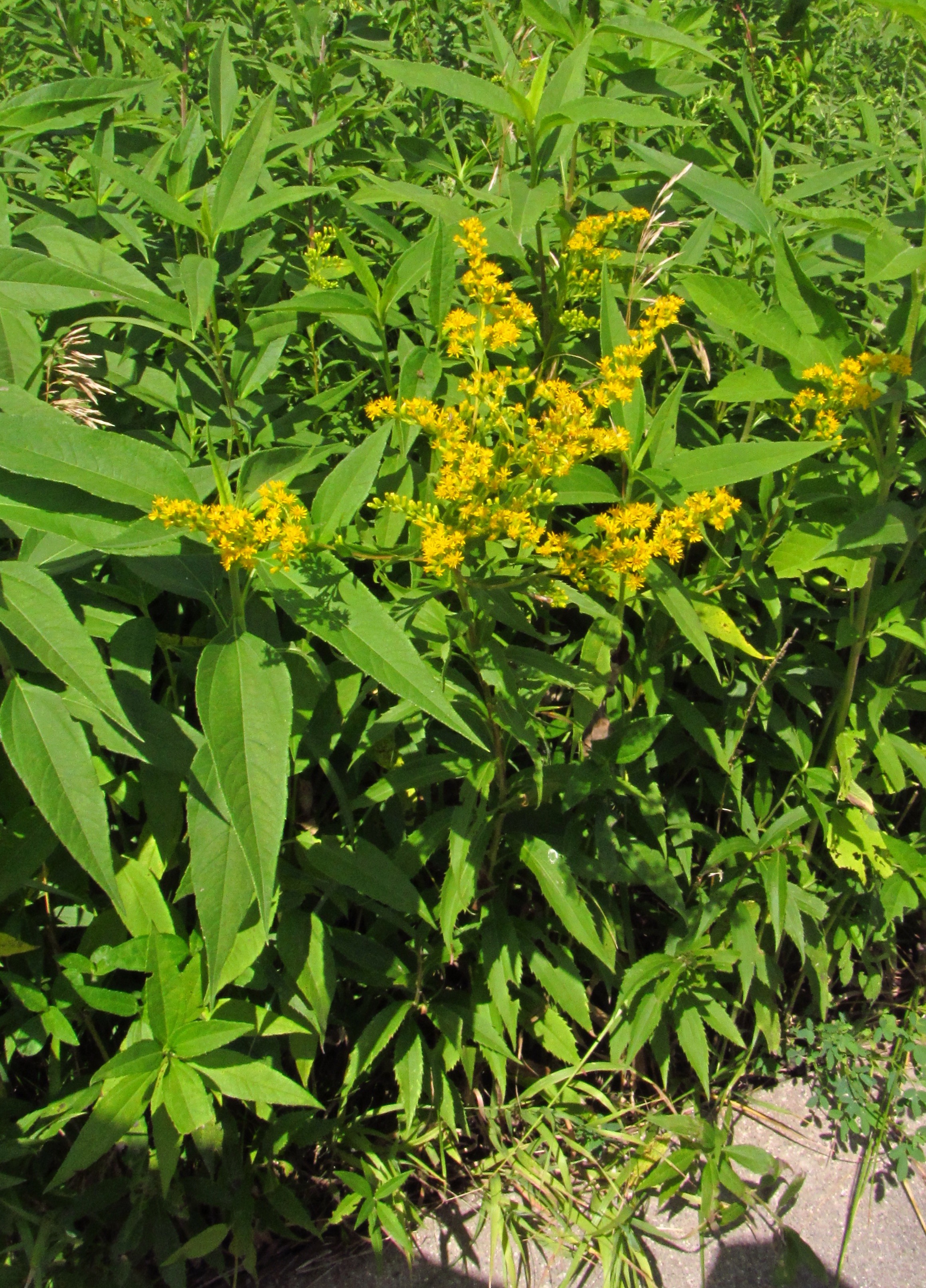 Many "previews of coming attractions" were visible along the trails. Masses of sawtooth sunflower grow near the nature center. Most of them are only a few feet tall now. 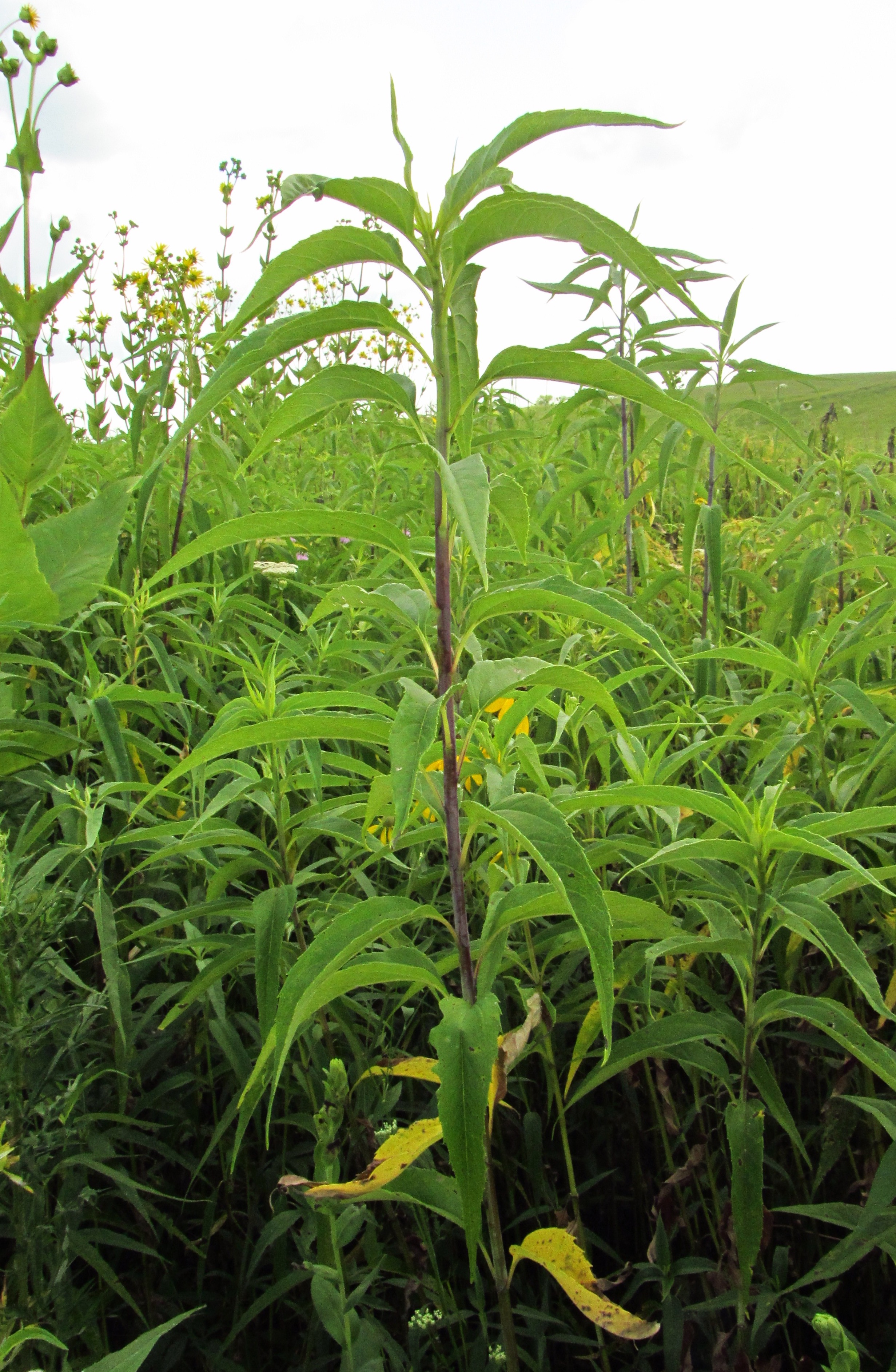 Some are already taller than the average adult. 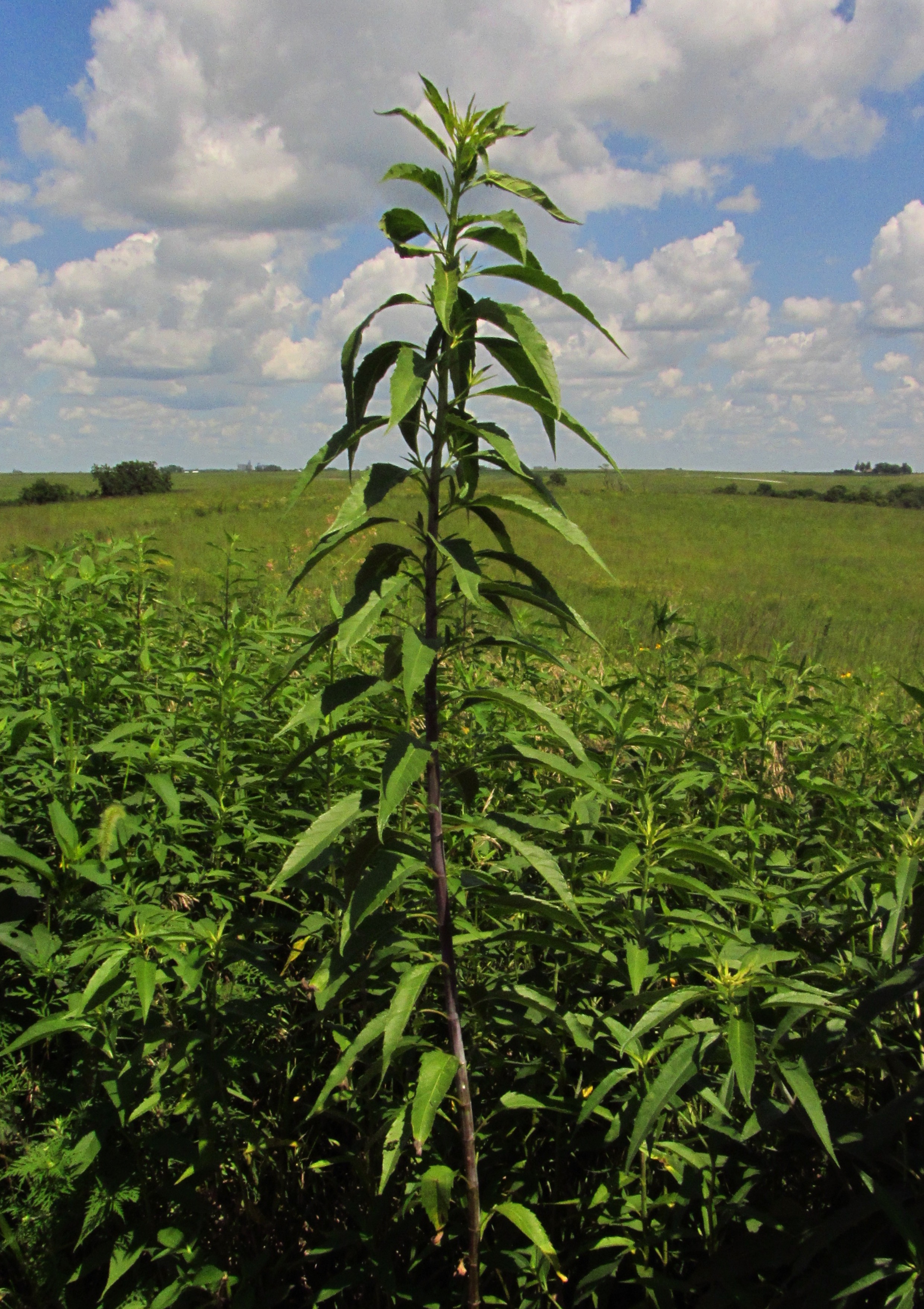 I believe most of the plants not yet blooming in the foreground here are also sawtooth sunflower. I'll be back in a few weeks to confirm. 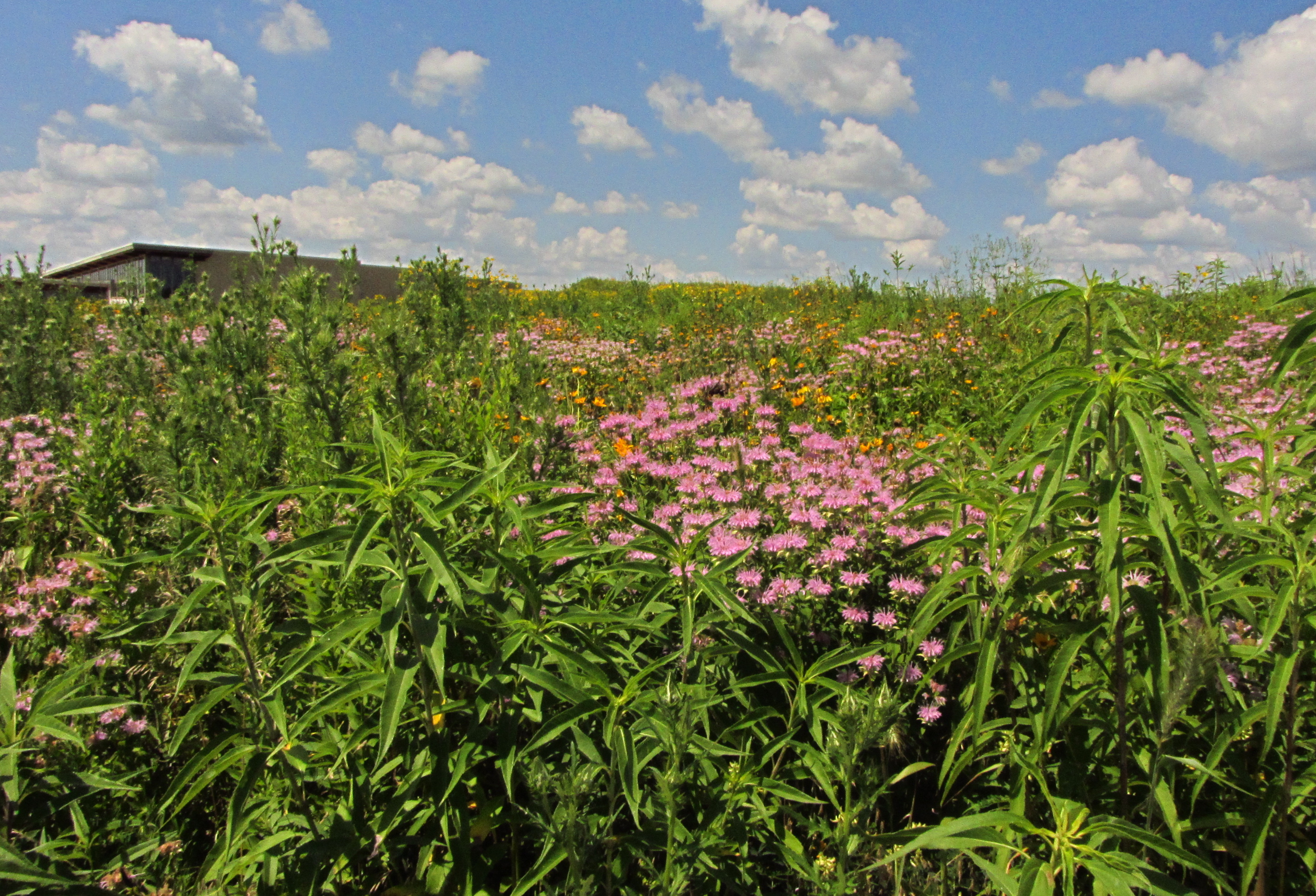 Colonies of Jerusalem artichoke were growing near the walking path. Bright yellow flowerheads will appear in September. 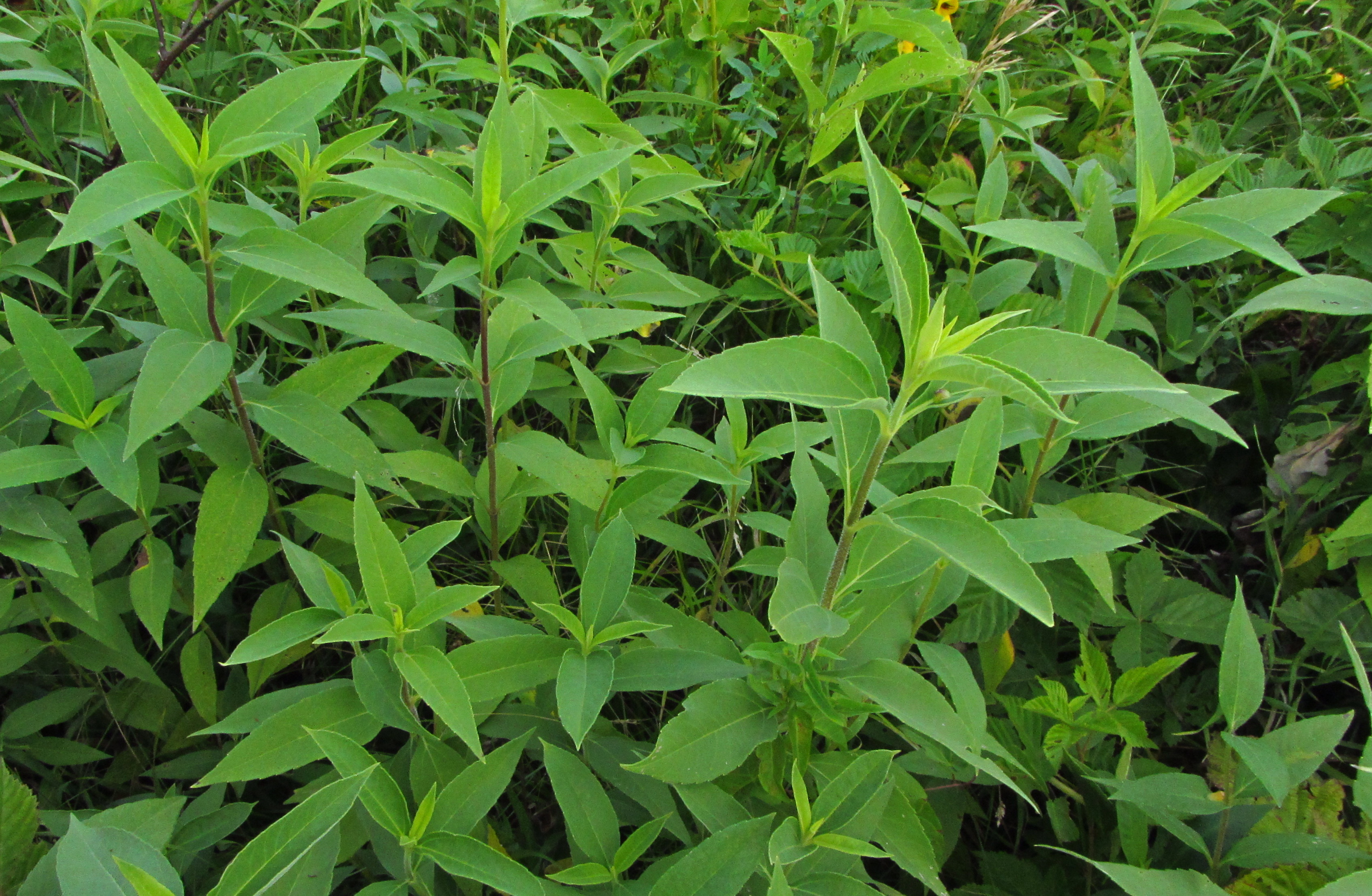 On the left, stiff goldenrod with buds starting to appear. On the right, another Jerusalem artichoke plant. 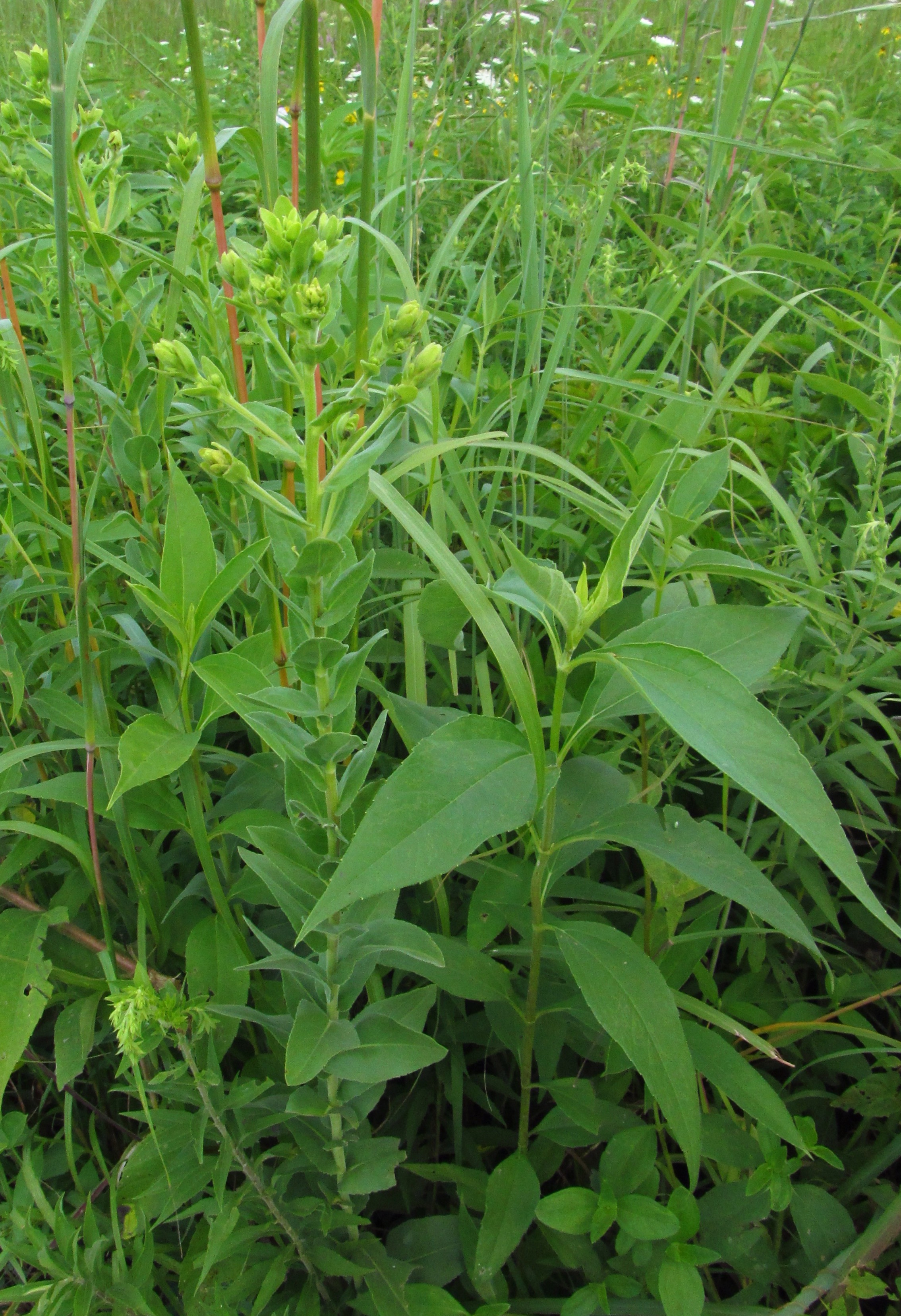