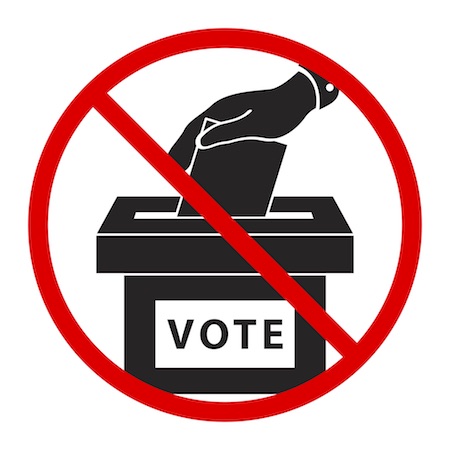 Senate File 568 was described as a “technical” election bill. Although Democrats did not support the initial version of the legislation, which the Iowa Senate approved in March, that bill did not burden the right to vote, as Senate File 413 had done.

State Representative Bobby Kaufmann introduced a lengthy amendment to Senate File 568 on May 19, the final day of the Iowa legislature’s 2021 session. State Senator Roby Smith, the leading figure in recent efforts to disenfranchise Iowans, ran the bill in the upper chamber. Republicans approved the amended bill on party-line votes in the House and Senate.

Section 43 of the new law replaces language in the earlier law about who can help a voter return a completed absentee ballot. Under Senate File 413, only the voter, someone living in the voter’s household, an immediate family member, or someone serving as a “caretaker” was authorized to return a ballot by mail or by hand-delivering to the county auditor’s office.

Senate File 568 makes it even more difficult for Iowans who request absentee ballots to ensure that their votes will be counted. For Iowans who are not blind or physically disabled, only the voter, someone living in the same household, or an immediate family member to the fourth degree of consanguinity can collect and return a completed absentee ballot.

Voters who are blind or physically disabled have an additional option: they can designate a “delivery agent” to return their ballot. The delivery agent must be a registered voter and can return at most two ballots per election. The agent can’t be anyone representing the voter’s employer, union, or a “person acting as an actual or implied agent” for a political party, candidate, or political committee. In other words, Republicans outlawed “ballot chase” operations, which Democrats have used effectively in some parts of Iowa.

It appears that voters who are not blind or physically disabled cannot designate anyone to collect and return their completed ballot, even if they need help for some other reason (they don’t drive, they are busy with caretaking responsibilities, they live with an abusive partner).

Mailing a completed ballot increases the chance that an Iowan’s vote will not be counted. Under the law Reynolds signed in March, the early voting period is shorter, county auditors have fewer days to mail absentee ballots, and ballots returned by mail must arrive by 8:00 pm on election day. (Previous law allowed late-arriving ballots to be counted if they had been postmarked no later than the day before the election.)

MORE OBSTACLES FOR IOWANS WANTING TO VOTE EARLY IN PERSON

Republicans already prohibited county auditors from scheduling satellite voting locations where Iowans could cast early ballots in person. Satellite voting doesn’t happen in most small counties but is popular in the larger counties where many Iowa Democrats live.

Under those standards, the newly appointed Republican auditor of Scott County–the third largest in Iowa–could find pretexts to reject every request for early voting sites other than the one at county elections office. Or, she could approve satellite voting sites in neighborhoods where many Republicans live but declare she is “unable to sufficiently staff” stations requested in Democratic neighborhoods.

“AN UNDUE BURDEN ON THE FUNDAMENTAL RIGHT TO VOTE”

Here’s the full text of the revised petition filed on June 9 by Iowa attorneys Gary Dickey and Shayla McCormally and attorneys from the Washington, DC-based law firm Perkins Coie.

The petition notes that Iowans voted in record numbers last year. “The record turnout was reflected across many demographics but was especially notable among the 15 percent of Iowans who are members of minority groups, including Iowa’s Latino community, which constitutes around 6 percent of the state’s population.”

Instead of celebrating “historic levels of direct engagement in the democratic process,” “one of the Iowa Legislature’s top post-election priorities was to pass omnibus election bills that restrict nearly every form of voting that Iowans—particularly minority voters—relied on in 2020.” The newly enacted “Voter Suppression Bills” contain the following provisions:

lack any cognizable justification for these burdensome effects on the franchise. The Bills are largely a grab-bag of amendments and new restrictions that lack any unifying theme other than making both absentee and election day voting more difficult for lawful Iowa voters.

Although Republicans have claimed the bills are about “election integrity,” the system doesn’t have any problems “that would call the integrity of the state’s elections into question or require remedial action from the Legislature, let alone these extreme measures that will impose significant burdens on voters.”

Nor would the new restrictions make elections more secure. “Instead, the Voter Suppression Bills are cynical manipulations of the electoral process that create problems—burdens for both absentee and in-person voters that do not serve any articulable state interests—without solving any.”

“Because these unnecessary voting restrictions independently and collectively impose an undue burden on the fundamental right to vote and violate multiple provisions of the Iowa Constitution,” LULAC is asking the court to declare them unconstitutional and permanently block them from taking effect.

FOUR VIOLATIONS OF THE IOWA CONSTITUTION

The lawsuit filed in March cited four sections of the Iowa Constitution which guarantee the right to vote, free speech, free assembly, and equal protection. The new court filing still makes four constitutional claims but has revised them.

Count I: Right to vote

Unlike the U.S. Constitution, Iowa’s constitution specifically protects the fundamental right to vote. The two new laws burden that right in many ways. “None of these provisions serves a compelling or even a legitimate government interest,” plaintiffs argue.

When courts apply “strict scrutiny” to a law being challenged, the government body must show the statute serves a compelling government interest. If judges apply a less stringent “rational basis” standard, the state would need to show only a “legitimate” interest in the provisions.

These provisions come into play because LULAC has helped many voters return completed absentee ballots. The new restrictions on who can help return ballots, which plaintiffs call a “Voter Assistance Ban,” prevent LULAC and its members “from engaging in constitutionally protected conduct.”

Courts typically subject infringements on speech and association to strict scrutiny. The lawsuit notes that the limits serve no compelling state interest, because “other Iowa laws already criminalize any undue influence or voter fraud that the Voter Assistance Ban might be intended to address.”

Plaintiffs argue that the new laws “treat ballots cast by similarly situated Iowans differently, denying some their fundamental right to vote.” Most ballots that arrive at county elections offices after 8:00 pm on election day will not be counted, even if they were mailed days or weeks earlier. But ballots cast by some Iowans (those living abroad, military voters, and those in the Safe at Home program for domestic violence victims) could be counted if they arrive up to six days later, as long as a postmark demonstrates they were mailed before election day.

“Absent relief from this Court, the Voter Suppression Bills will impose an arbitrary and disparate mechanism for determining whether Iowans’ votes—including the votes of Plaintiff’s members—will be counted […].”

This new claim in the revised petition argues,

The Voter Suppression Bills target individuals who are more likely to vote for Democratic Party candidates, including Latino voters and other voters of color. The Iowa Legislature, with intent to achieve a partisan advantage, has manipulated the state’s election mechanics in ways that restrict or eliminate methods of voting that are disproportionately used by Plaintiff’s members and the communities they serve because of their perceived political views— and, in doing so, imposed unjustified barriers on Plaintiff’s members’ ability to participate in the political process.

Regardless of how the Polk County District Court resolves this lawsuit, the case will surely be appealed to the Iowa Supreme Court before the 2022 election. No one can be sure of how the justices will decide any case, but my post on LULAC’s initial lawsuit included some speculation about whether the court will find Iowa’s new voting restrictions too burdensome.