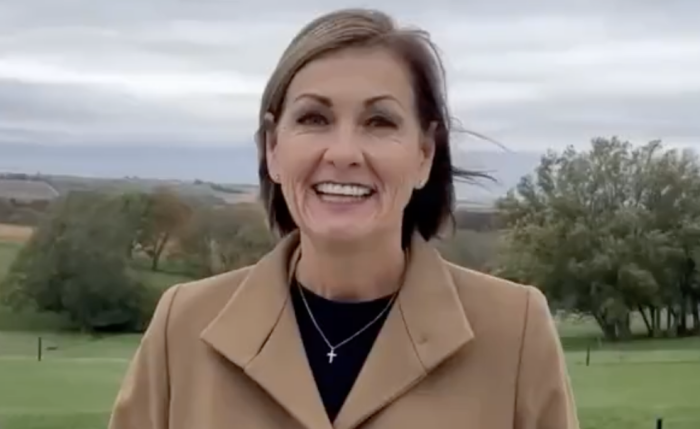 Governor Kim Reynolds has kept one of three positions on Iowa's Public Employment Relations Board (PERB) vacant for more than a year, and since October has ensured the board operates with Republican members only.

By law, the board that handles public sector labor relations "shall consist of three members appointed by the governor," of whom no more than two "shall be of the same political affiliation." Reynolds has left one position unfilled since August 2020 and recently replaced Democrat Mary Gannon with Republican Jane Dufoe. She serves alongside Erik Helland, a longtime Republican and former state lawmaker.

The current situation runs counter to the spirit of PERB's partisan balance requirement and potentially allows Reynolds to circumvent the Iowa Senate confirmation process, by shifting board members who are not confirmed to an open position.

In addition, state salary records show Reynolds' GOP appointees to PERB immediately earned higher pay than Gannon, despite the Democrat's years of experience. For decades, under Republican and Democratic governors, PERB members not chairing the board had received identical salaries.

The governor's communications director Alex Murphy confirmed Dufoe's party affiliation in September, then did not respond to eight follow-up inquiries about the PERB appointments over a three-month period.

Established by the 1974 collective bargaining law, PERB is supposed to be a "neutral agency" promoting "harmonious and cooperative relationships between government and its employees without disruption of public services."

The board adjudicates labor disputes within state and local government or school districts. Those include prohibited practice complaints, whistleblower complaints, and grievance or discipline appeals. PERB also facilitates mediation or arbitration to resolve impasses and oversees recertification elections for bargaining units, which have occurred far more frequently since Republicans changed the collective bargaining law in 2017.

Unlike Iowans serving on most state boards and commissions, PERB members are paid a full-time salary and required by law to "devote full time to their duties."

State boards often experience vacancies for several months at a time. But most of those bodies meet only occasionally and have nothing like PERB's workload. Nor do members of most state boards directly manage staff, as PERB members supervise administrative law judges and other employees.

In PERB's 47-year history, the board has rarely operated with only two members for an extended period. My research uncovered two other vacancies not filled for more than a year.

Following a board member's retirement in June 2010, Governor Chet Culver (who was up for re-election) did not appoint a successor. Governor Terry Branstad took office in January 2011 but did not fill the PERB vacancy until early 2012. Jeff Boeyink, who was Branstad's chief of staff during that period, did not respond to messages seeking clarification on why no one was appointed sooner.

After the Iowa Senate did not confirm PERB chair Mike Cormack to a second term during the 2018 legislative session, Reynolds left that position unfilled from May 2018 to July 2019, when she named Cheryl Arnold to chair the board. One important distinction: the two board members serving during that time were a Democrat (Gannon) and a Republican (Jamie Van Fossen).

Iowa Senate Democrats blocked Arnold's confirmation in June 2020. Reynolds let PERB continue operating with two members. She had appointed Helland to succeed Van Fossen for a four-year term beginning in May 2020. Gannon was serving in a holdover capacity. Her four-year term expired at the end of April 2020, but Reynolds "asked her to stay on until a replacement was appointed," without signing a formal appointment letter, PERB staff told me in response to a records request.

The Iowa Senate never voted on whether to confirm Helland during the 2021 legislative session. Reynolds withdrew the nomination shortly before lawmakers adjourned, when it was clear he didn't have enough support in the chamber.

As Bleeding Heartland reported exclusively last year, Reynolds then appointed Helland to be PERB chair (the position that had been vacant since the summer of 2020). The governor's office kept that decision quiet, not mentioning Helland in a July news release listing nearly 140 other people Reynolds had recently named to state boards and commissions.

In September, Reynolds' senior legal counsel informed Gannon that the governor had named someone else to the PERB position in which she was holding over, effective October 1. That appointee was Dufoe.

At this writing, Reynolds has not filled the position Helland occupied until July 2021.

The Helland and Dufoe appointments are subject to Senate confirmation. But if they fail to win support from 34 senators during the 2022 session, Reynolds could theoretically pull another switcheroo next summer, naming Dufoe to the now-vacant board position and Helland to the seat currently occupied by Dufoe.

State Senator Nate Boulton is the ranking Democrat on the Senate Labor and Business Relations Committee and has represented clients before PERB as a labor attorney. When I sought comment in November, Boulton expressed concerns about how Reynolds is handling openings on the board.

While it’s not illegal to have a board function in the short term with a shortage in members, which happens often when people leave positions and we await a new appointment, leaving a board that by law is to be balanced in partisan makeup without a Democratic appointee indefinitely obviously is contrary to the intent of the legal requirement.

From time to time, Iowans appointed to a state board or commission have changed their party registration to keep the body in compliance with the partisan balance law. However, records obtained from the Polk County elections office in November indicate that Helland has not changed his party affiliation.

I asked Boulton about another angle. Two PERB members can conduct business, but if one of them had to recuse from hearing a case for any reason, the board would not have a quorum. Boulton agreed: "With a board this small, if one of the two members has a conflict, the board is forced to wholly surrender its role in adjudication of appeals."

Like the governor's appointees to lead state government agencies, those holding full-time paid positions on state boards earn salaries within a designated range, depending on pay grade. The governor has discretion to set the pay within those boundaries. According to the Iowa Department of Administrative Services website, the salary ranges for the PERB chair and PERB board members are identical, topping out at $97,460 per year.

I requested salary records for the last decade from PERB and from the Iowa Department of Administrative Services, which handles payroll for state government. Documents provided in November indicated that when Branstad was governor, the PERB chair (Jim Riordan, and later Cormack) received the highest pay. Other board members serving side by side (Janelle Niebuhr and Van Fossen, and later Van Fossen and Gannon) earned the same salary as one another.

Past PERB members Sue Warner (1988-2010), Riordan (2000-2014), and Neil Barrick (2003-2012) confirmed by phone or electronic message that was the norm during their years of service. Regular PERB members received the same salary, while the chair earned somewhat more.

Reynolds departed from that practice. Arnold began working as PERB chair with biweekly base pay of $3,748.46, which works out to $97,460 annually—the maximum allowed by law.

Then Dufoe stepped in at the top of the pay scale: $3,748.46 every two weeks, just like Helland. That's more than Gannon was making after doing the same job for five years and nine months.

Reached by phone, Gannon declined to comment on the pay disparity.

The governor's spokesperson ignored questions about Helland's and Dufoe's qualifications, and why Republicans appointed to PERB were paid more than a Democrat.

Dufoe did not respond to an inquiry seeking her resume, board application, or other details about experiences relevant to her current position. Prior to this appointment, she served on the school board of the Center Point-Urbana district (rural Linn and Benton counties). Perhaps Reynolds was impressed that Dufoe argued against imposing a mask mandate for the 2020/2021 academic year.

Boulton told me in November,

I'll update this post as needed with any comments or clarification from the governor's office.

Top image of Governor Kim Reynolds is a screenshot from a video posted on her political Twitter account on November 2, 2021.