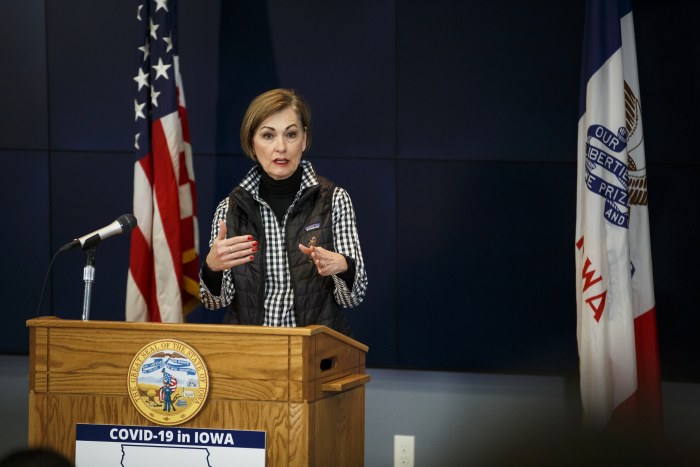 Neither the Iowa Department of Public Health nor the governor’s office responded to inquiries about who–if anyone–will be inspecting meatpackers’ coronavirus mitigation measures.

During Governor Chet Culver’s final address to the Iowa legislature this morning, he mentioned that his administration

provided the legislature and the new administration with a detailed summary addressing the historic egg recall last summer. This includes five proposed changes in Iowa law that will help improve food safety and employee training standards in the wake of the salmonella outbreak last summer.

I’ve posted the full text of the Culver administration’s egg safety proposals after the jump. This passage summarizes the five areas that would require legislative action:

Although the new federal egg regulatory regime is aimed at the state’s largest producers, a new, mandatory Iowa [Salmonella enteriditis] detection and prevention program should be enacted under amendments to existing law and the creation of a new Iowa Code Section 196.15 to complement the federal government’s efforts to prevent SE contaminated shell eggs from entering into the nation’s food chain from all of Iowa’s egg producers.

There are at least five issues that are not covered by the recent federal egg regulatory reforms, that Iowa law does not currently address and that, therefore, unless corrected legislatively, may leave consumers of Iowa-produced eggs vulnerable to future SE poisoning.  First, federal egg safety laws pertain only to egg farms that host at least 3,000 hens and do not cover smaller operations.  Second, under federal law, producers have no legal obligation to report positive SE testing results to any federal or state agency.   Third, there are no accreditation or certification standards for laboratories that conduct SE testing.  Fourth, there are no legal criteria that establish the minimal level of training and competency for persons who are charged with the responsibility for implementing a new mandatory SE detection and prevention program.  And, fifth, there is no clearly-identified funding stream to support an effective expansion of state egg programs.

It would take heavy lifting to get these sensible ideas passed and signed into law. Even when Democrats controlled both chambers of the Iowa legislature, few new regulations on agriculture saw the light of day. The Iowa House now has a 60-40 Republican majority, which makes passing new food safety rules even more of an uphill battle. Governor-elect Terry Branstad has repeatedly criticized what he views as excessive regulations on farms, and the Iowa Farm Bureau Federation endorsed Branstad and almost a full slate of Republican legislative candidates last year.

The U.S. Senate approved a continuing resolution today to fund the federal government at current levels through March 4, 2011. Both the cloture motion and the bill itself passed by large bipartisan majorities; Iowa Democrat Tom Harkin and Republican Chuck Grassley voted for the cloture motion and the funding resolution. Harkin slammed Republicans for blocking the fiscal year 2011 omnibus bill last week, because unlike the continuing resolution approved today, the omnibus bill would have increased funding for programs such as Head Start, child care subsidies, meals for seniors and drugs for AIDS patients. The House of Representatives is expected to approve the continuing resolution later today to stop the government from running out of money at midnight. UPDATE: The House approved the spending bill by 193 to 165, with 75 representatives not voting. All five Iowans voted, and they split along party lines.

A bigger problem will come in March, when House Republicans force through major cuts in domestic spending (probably with the eager cooperation of President Barack Obama). Those will be a drag on the economy, erasing any stimulative effect from the lousy deal Obama struck on extending the Bush tax cuts.

Meanwhile, the House gave final approval to the food safety bill today on a mostly party-line vote of 215 to 144. Iowa’s representatives split the usual way, with Democrats Bruce Braley, Dave Loebsack and Leonard Boswell voting for the bill and Republicans Tom Latham and Steve King voting against it. I am still surprised that the Senate resurrected the food safety bill on Sunday. I have yet to see any explanation for why Republican Senator Tom Coburn of Oklahoma agreed to let it pass. Coburn had been that bill’s most vocal opponent in the Senate all year. It’s not as if Coburn suddenly decided to stop being a jerk; he appears ready to block the 9/11 responders bill from becoming law during the lame-duck session. Even some Fox News commentators are upset about that political maneuver.

The Senate took a step toward ratifying the Strategic Arms Reduction Treaty (START) today. Eleven Republicans joined all Democrats present to approve a cloture motion on that treaty, which the U.S. and Russia signed in April. Grassley voted with most of his GOP colleagues against the cloture motion on START; he has voted for various Republican amendments offered to the treaty. I haven’t seen any statement from his office explaining his opposition. The last START expired in December 2009, and we need to ratify the new treaty in order to resume inspecting Russian nuclear bases. There could hardly be a more important national security issue. Ronald Reagan’s former chief arms control negotiator said last month that Iran and North Korea were the “only two governments in the world that wouldn’t like to see this treaty ratified.”

Food safety bill "back from the dead"

Bleeding Heartland readers may recall that Senate Democrats imperiled the food safety bill, S510, by forgetting to put revenue-raising language in a bill that originated in the House of Representatives. Senate leaders tried to salvage the situation by adding the food safety language to the massive ominbus spending bill Congress was expected to approve last week. However, Senate Republicans torpedoed the omnibus bill, leaving few options for getting the food safety bill to President Barack Obama’s desk before the new Congress convenes.

According to Cox Radio reporter Jamie Dupree, the food safety bill came “back from the dead” on Sunday. The Senate took the food safety language from the continuing resolution on spending that had already passed the House and inserted it into a “Cash for Clunkers” bill the House had previously approved. (The food safety language replaced the Cash for Clunkers language.) The Senate then approved the new bill by unanimous consent. Amazingly, no Republican gummed up the works on that, not even the food safety bill’s deadly enemy Tom Coburn. The bill now goes back to the House, where Dupree says approval is expected this week. UPDATE: The Hill’s Alexander Bolton and Matthew Jaffe of ABC News report on the Senate maneuvering.

I had almost given up on this bill passing. It’s not perfect, but it’s a good step forward with bipartisan support in Congress. Both Tom Harkin and Chuck Grassley voted for the bill a few weeks ago in the Senate.

The U.S. Senate approved the FDA Food Safety Modernization Act today by a 73 to 25 vote. Tom Harkin and all other Senate Democrats voted for the bill, as did 15 Republicans including Iowa’s Chuck Grassley. Grassley also was among 14 Republicans who joined Democrats to support the cloture motion ending debate on the food safety bill yesterday.

Some details on the bill as well as its complicated path through the Senate are after the jump.

Northey ignorant about Iowa Code and other egg recall news

Following up on yesterday’s post, the recall of half a billion Iowa-produced eggs continues to reverberate in Iowa politics.

Republican Secretary of Agriculture Bill Northey still denies that he could have done more to ensure food safety regulations were followed at the DeCoster facilities. Northey’s opponent, Francis Thicke, has said feed mill inspections “could have identified a strain of Salmonella Enteritidis before 1,470 Americans were sickened and a half billion eggs were recalled.”

Details and more links are after the jump.