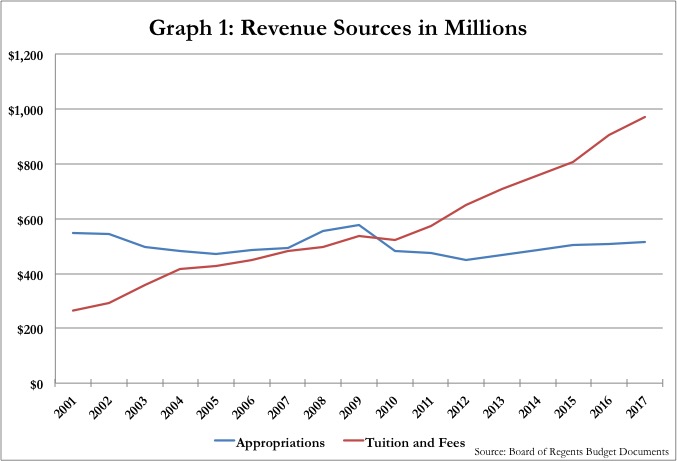 Disheartened in the Heartland: Iowa’s Disinvestment in Higher Education (UPDATE)

Austin Frerick, an Iowa native and economist who has worked at the Institute for Research on Poverty and the Congressional Research Service, follows up on the trend of Iowa state universities becoming “increasingly dependent on higher tuition and student fees to make up for the declining state support.” -promoted by desmoinesdem

The Iowa Board of Regents recently approved another budget that does nothing to stem the privatization of higher education in Iowa. State appropriations in fiscal year 2017 for the University of Iowa, Iowa State University, and the University of Northern Iowa is still LESS than it was in 2001, down 32 percent when you adjust for inflation. And while investment falls, tuition and student debt continues to soar to record highs.

I updated the figures from a previous post on the subject and the trend lines have only intensified.

Graph 1 shows that the schools are becoming increasingly dependent on higher tuition and student fees to make up for the declining state support.

Compounding this problem is that almost all new jobs require some sort of post-high school education: even manufacturing jobs. According to a recent nonpartisan Congressional report, all the new manufacturing jobs since 2000 have required some sort of post-high school education, as seen in Graph 2. Given this reality, we should be doing the opposite of what we are doing now; we should double down on investment in education so that Iowans have the skillsets to get these jobs.

The problem with the gradual privatization of higher education is that the impacts aren’t really visible to the naked eye. Yet you see it in the UNI graduate from Fort Dodge who has to take a job in the Twin Cities, instead of a job in his hometown because the salaries are higher, and he has a lot of student debt. You see it in the single mom who wants to finish her bachelors to get that better job, but passes because she doesn’t want to take on the debt. Higher education privatization hinders access for individuals and Iowa’s economic growth. It’s like the Titanic: we’re slowly taking on water but at some point, the ship will no longer be able to bear it.

The updated data can be found here.