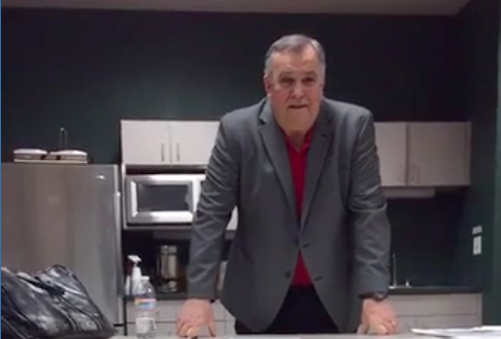 State Representative Ralph Watts lived up to his unofficial nickname ("Ralph Worst") at a public forum in Adel on February 4. The eight-term Iowa House Republican repeatedly and contemptuously referred to Bryce Smith, his 2016 Democratic challenger, as "red rider," a derogatory term for a gay man.

Smith's husband Kale Smith was recording the proceedings, with the camera focused on Watts. Here's my transcript of the exchange that began when ReNae Watts Arnold, the GOP lawmaker's daughter, challenged Smith for videotaping. You can watch this scene unfold beginning around the 1:09:30 mark of the video Bryce Smith posted to Facebook on February 4 (also available on Dropbox).

ReNae Watts Arnold: Can I just ask something, quick?

Kale Smith: This is a public forum, so yeah, it's fair.

(cross talk from other audience members: "That's the point I made")

Arnold: It's a public forum.

Kale Smith: I'm not videotaping them.

Arnold: So it's ok for everybody else to videotape, but not for--

Kale Smith: Why are you videotaping?

Watts: By the way, where is-

Arnold: Why are you?

Watts: If you're videotaping that--

Arnold: Why are you? So you can talk bad about him on social media.

Kale Smith: I'm not talking bad about him.

Arnold: And he's the one to talk crap on social media, and he's not here.

Kale Smith: No. He's holding a public forum, but can't even announce it?

Arnold: He [Bryce Smith] went to an Urbandale in Polk County forum and called him [Watts] out,

Kale Smith: Because he wasn't there.

Arnold: Because he wasn't there. It's not his district.

Kale Smith (knocks on table for emphasis): It is too his district.

Arnold: This is his district.

Kale Smith: He is in charge of part of Polk County.

Unidentified man in audience: Not in Urbandale.

Kale Smith: Yes, he has part of Urbandale. Yes, he does.

Kale Smith: He is running his business right up the street.

Watts: He is? He complained that I didn't go to Urbandale. This forum is four blocks from his business.

Watts: But he's been chirping and sniping ever since the election.

Kale Smith: It's your duty as the elected official to go to public forums for your constituents.

Kale Smith: He's not an elected official. This isn't his--this is not his duty. This is your duty.

Watts: It wasn't his duty in Urbandale either.

Kale Smith: Yeah, he can attend.

Watts: OK. You got that? (points at Kale Smith)

Around the 1:16:00 mark, Watts returned to the topic, after an unidentified woman said everyone has a right to come to public forums, adding that Watts needs to respond to attendees whose opinions differ from his.

Watts: This forum was held here today, and it's four blocks from where red rider has his business. Why isn't he here?

Watts: Why isn't he here? If he was so concerned about me not being in Urbandale.

Woman: But, no. He wasn't elected. You were elected, so you need to respond to our questions and concerns.

Neither House Speaker Linda Upmeyer nor Majority Leader Chris Hagenow has responded to my request for comment on Watts's behavior. Top Iowa House Republicans don't appear to hold Watts in high esteem. Just like during the last legislative session, they did not make him chair or vice chair of any committee. Many GOP state representatives with far less experience than Watts (who was first elected in 2002) are running Iowa House committees.

On February 5, Bryce Smith posted on his Facebook page,

After seeing, watching and hearing Mr. Watts during his forum, I am disturbed. I am at a loss for words really. A person who has held public office for nearly 14 years lowered himself to levels of name calling, bait and hook questioning and a total lack of facts and knowledge of what is going on in our state government and what is going on in our communities day in and day out. Mr. Watts said many false statements, could not supply evidence or citations when asked and lacked the humility to admit when he did not know something.

I want to send a message to Mr. Watts regarding his actions and words at his forum:

I also want to say that how you treated my husband was totally unacceptable and very disrespectful, especially an elected official who is suppose to represent all people. The acts of intimidation, lack of respect, and the derogatory slur/name calling was live streamed and recorded. Be careful Mr. Watts, the people are watching and listening...".

Another low point from the February 4 forum followed a contentious exchange about abortion, starting around the 57:00 mark of the video. Watts was talking about so-called "partial birth abortion." A woman in the audience objected, "Do you know why women have partial birth abortions? Do you know why women do that? It's not an easy choice. Do you have a uterus? Do you understand?" (She was alluding to the reality that women who terminate pregnancies after 20 weeks gestation usually have serious health problems or are carrying a fetus with abnormalities incompatible with life outside the womb.) You can hear outrage from supporters of Watts in the room.

Watts promised to "race to the button" to support Senate File 2, defunding Planned Parenthood. That comment prompted an unidentified man in the audience to say, "This is why I voted for him, is because he does stand by his moral issues and his moral thing. If you think the rest of us, or that somebody has the right to do that, because you have a uterus, then your mother should have taught you how to keep your legs closed."

Watch the video soon after the 58:00 mark to see a big belly laugh from Watts, who smiled and pointed at that man, apparently considering him to have delivered a hilarious comeback. Stay classy, Representative.

On Monday evening, One Iowa Executive Director Daniel Hoffman-Zinnel issued a statement saying, “Homophobic slurs should never be used, especially by an elected official. We must continue dialogue on inclusion and civility with an understanding of how slurs like this impact real Iowans. Respect is a non-partisan Iowa value, and leaders in our communities must model civil discourse. Bryce Smith deserves an apology from Rep. Watts.”

Channel 13 asked requested an interview with Watts but he declined. However, Watts did tell Channel 13’s Jodi Whitworth the allegations are untrue. Watts says the reason he called Smith the term was to mock his performance while on the campaign trail.

I don't understand how "red rider" could be a reference to Smith's campaigning in House district 19 last year.

SECOND UPDATE: Watts came up with a different explanation when speaking to the Des Moines Register's Molly Longman:

Watts said later Monday that he didn't know the term "red rider " was a slur.

"Red Ryder BB gun is the thing that falls in the category of a kid's first gun, and it's used to teach kids how to use a weapon and shows them responsibility and shows they’re capable of using something more powerful," Watts said. "With some of the things that have happened, the constant sniping and constant obscure criticism shows me that he hasn’t progressed past the Red Ryder stage... I hadn't heard about the slur until he brought it up. "

Bryce Smith said that, regardless of the intended meaning of the words, he was disappointed that Watts would speak of him derisively.

"Whether he meant it as a gay slur or not, words have repercussions and consequences, regardless of how you meant it," Smith said. "You can take it into other contexts. If he meant 'not a real gun,' it's still not respectful to his constituents and shows a level of behavior that should not be accepted, especially in elected officials."