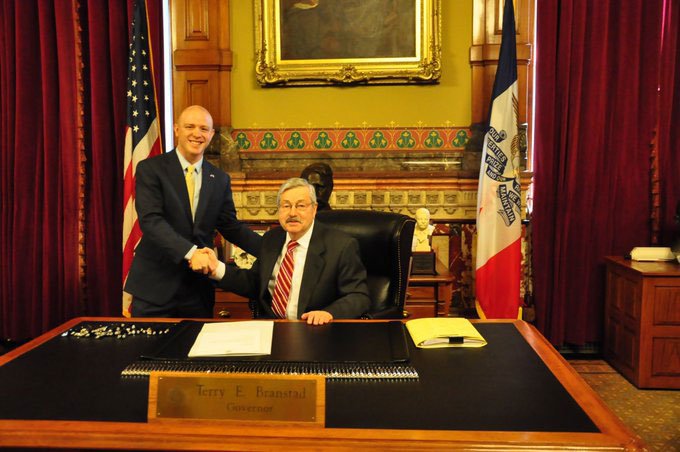 Going against longtime standard practice for high-profile legislation, Branstad excluded reporters from attending what staff called a "private" event. Drew Klein, state director for Americans for Prosperity, later posted a picture of himself shaking the governor's hand at the bill signing. The large number of pens on the governor's desk suggest that many others celebrated the historic move to take rights away from an estimated 180,000 public workers.

Jodie Butler was determined to find out who else was in that room.

Butler served as Branstad's education policy director for several years during the 1990s. During the collective bargaining bill's rapid transit through the state House and Senate, she was an articulate critic of the proposal, speaking at a legislative hearing and a crowded weekend forum in Ankeny.

Soon after House File 291 became law, Butler filed an extensive open records request under Iowa Code Chapter 22. She sought all correspondence related to collective bargaining changes between the governor's office and some state departments, all Iowa Republican lawmakers and House or Senate GOP caucus staff, and representatives of various business groups: Taxpayers of Central Iowa, Americans for Prosperity, Iowans for Tax Relief, the Associated Builders and Contractors, Iowa Chamber Alliance, and Iowa Association of Business and Industry. Butler also asked for a list of all who attended the February 17 bill signing.

Branstad's deputy legal counsel Colin Smith handles records requests. On February 28 he acknowledged receipt of Butler's message and wrote back to clarify the search terms staff would use to collect records. That message, which you can read on pages 6 through 12 here, included the following statement:

Butler wasn't so easily put off. From her rapid response to Smith:

As to the request related to those attending the bill signing for the collective bargaining reform legislation on February 17, 2017, I find it hard to believe that such a list does not exist or cannot be recreated. Both you and I know that individuals just don't walk into the Governor's office to attend a bill signing; they are invited to attend. So, someone on the Governor's staff must have invited individuals to attend (or must have directed lobbyists or others involved in the bill's passage to invite individuals to attend). That is the information I am seeking. I expect that the information can in fact be obtained with some diligence on your part.

Smith replied less than an hour later on February 28:

Butler answered within minutes, confirming that she wanted a list of people invited to watch Branstad sign the collective bargaining bill.

Fast forward to March 6, when Smith informed Butler that a preliminary search returned some 3,500 e-mails as potentially responsive to her request. Because reviewing those messages would take many hours, fulfilling Butler's records request would cost approximately $1,441 ($33 per hour of staff time, with no charge for the first three hours). I enclose the exchange below.

Butler answered quickly, expressing surprise at the high cost estimate, given that IT staff should be able to run electronic queries and download the material to a thumb drive within a couple of hours. She had some questions about the planned review and what material might be restricted from the correspondence, since Chapter 22 has a presumption of openness. She added, "Also, can you please send me the list of those invited to the bill signing as soon as possible?"

Smith's response on March 7 included the following: "As to your request for copies of invitations to those that were invited to the bill signing you reference, we will provide that information to you in accordance with Iowa law."

On March 20, Smith informed Butler that her records request was ready for pick-up. In the end there was no charge, because most of the 3,500 e-mails turned out to be news clips rather than substantive communications related to state policy on collective bargaining.

However, key information was missing from the file. Smith's cover letter reverted to the excuse offered three weeks earlier: "As to the second part of your request concerning the list of invitations to the bill signing in question, our office has no public records responsive to your request."

Butler wrote to Smith again on March 21, asking him to send names of those who attended the bill signing "at your earliest convenience." According to Butler, among hundreds of records provided to her, the only reference to the bill signing was in this e-mail exchange between Branstad's communications director Ben Hammes and Matt Everson, lobbyist for the National Federation of Independent Business.

The messages indicate that the governor's staff communicated with representatives of groups supporting the collective bargaining legislation about the place and time of the bill signing. It appears that Hammes wanted to answer Everson's question about the event either by phone or in person, presumably to avoid creating a public record.

Branstad knows who was present when he signed House File 291. Hammes and other members of Branstad's staff know who was told where and when to show up on the morning of February 17. Whichever lobbyists, lawmakers, or business representatives received ceremonial pens know the secret too. Only the public is out of the loop.

Butler was undeterred. From one of her messages on March 21:

Thanks Colin, but from our previous e-mails you indicated that you would be able to provide a list of those invited as there were hundreds of pens in the photo with the Governor I cannot believe that you did not have some way to provide that information given that staff is ALWAYS present in bill signings with the Governor.

If Drew Klein was in the photo, we are certain that he was not the only one given the FOIA request suggests that ABI, NFIB, etc. were all supporting the changes. What exactly does it take to get a list of the people created from staff who were in the private bill signing of a PUBLIC piece of legislation affecting over 180,000 public employees whose families will be affected by the changes?

At that point, Smith attempted to bow out.

Our office received and fulfilled your open records request as submitted. As stated in my closing letter to you dated March [sic] 28, 2017, our office has no documents responsive to your request regarding a list of invitees to the bill signing you reference. I cannot comment on the responsive documents provided as part of your request. If you would like a comment, I would direct you to Ben Hammes, our office's Communications Director. I have cc'd him here for your reference.

A "comment" from Hammes is worthless. He knows who was in that room. Butler answered with an e-mail to Hammes and Smith, including the now-infamous photo of Klein shaking the governor's hand.

While I appreciate the fact that you have fulfilled the FOIA request, I believe with this photo that was taken at a private bill signing with the Governor when the press corps of the state house was not invited, that you should be more transparent with a list of those who attended the bill signing, including all public officials and private citizens from both Iowa and out of state. It is truly a sad day in Iowa when for whatever reason the Governor felt the need to hold a private bill signing on such a controversial piece of legislation that was rushed through the legislative process using rare tactics and with no regard for public input or legislative input from the minority party.

What is it that you’re hiding and why? The vast number of the pens indicates you had a very large audience and that you convened the group with full knowledge directly after the passage of the bill.

We know what they're hiding: the identities of the insiders who helped shape this legislation and get in through the House and Senate.

We can guess why they're hiding it: Branstad would prefer not to admit whose interests he was serving when he signed away all meaningful collective bargaining rights for Iowa teachers and other public workers.

Speaking to journalists on February 20, the governor "defended the media's exclusion from the signing by saying he's accessible through events like weekly press conferences," Barbara Rodriguez reported for the Associated Press. William Petroski recounted more lame excuses in his story the same day.

The Des Moines Register asked Branstad's staff on Thursday [February 16] if there would be a public bill signing ceremony for the controversial legislation, which dismantles a 43-year-old public bargaining law signed by former Republican Gov. Robert Ray. The governor's office said there were no plans for a bill ceremony, which would typically be open to the Iowa Capitol press corps. [...]

Branstad was asked by reporters Monday about Klein's attendance when the collective bargaining bill was signed. The governor said he had "quite a few people that had made a specific request" to witness the event and he wanted to accommodate them.

Asked if he would provide a list of the people who watched him sign the bill, Branstad said, "It wasn’t a formal bill signing. I actually just signed the bill, I signed it with a number of pens to give to legislators who wanted the pens that were used in the bill signing, and there were a few other people who had asked to be there."

Pressed for the names of other lobbyists who attended the bill signing, Branstad said, “Oh, I don’t know. There may have been just a few. I don’t know who is a lobbyist to tell you the truth.” He added that most of those at the event were staff.

For Branstad to claim this event wasn't a "formal bill signing" is ludicrous. Many people gathered in his office to watch him sign a bill and receive pens to mark the occasion. That is the essence of a formal bill signing.

The governor's staff clearly know who "made a specific request" to witness the event. Even if those names were never written down on any one document, compiling a list based on recollections and phone records should be a straightforward task. The names should already be in Butler's hands. They should have been sent weeks ago to reporters who asked which lobbyists attended the bill signing.

Not only was House File 291 among the most consequential bills to be approved this year, its passage is arguably one of the most important Iowa political events of the decade. The law will affect the livelihoods of 180,000 people, in some cases profoundly reducing their benefits packages or total compensation. It will surely weaken and could eventually decertify the state's most powerful public employee unions.

The public has a right to know who was invited to the party in the governor's office on February 17. Branstad should tell his staff to stop covering up the truth.

Butler's not ready to stop seeking this information, and neither am I.