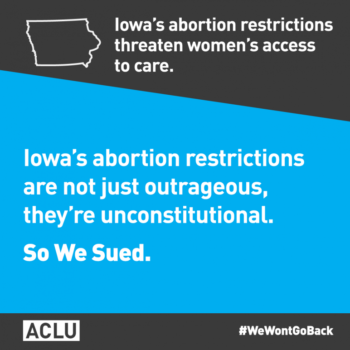 Iowa's proposed 72-hour waiting period for all abortions represents an "unwarranted intrusion into women’s personal privacy and autonomy" that "will threaten women’s health" and create "an undue burden" with "an improper purpose," according to a lawsuit Planned Parenthood of the Heartland filed yesterday in Polk County.

Governor Terry Branstad plans to sign Senate File 471, which would be one of the country's most restrictive anti-abortion laws, first thing in the morning May 5. Originally conceived as a ban on most abortions after 20 weeks of pregnancy, the bill became much broader when Iowa House Republicans added the no-exceptions 72-hour waiting period, new ultrasound rules and a requirement that doctors inform women about other options and "indicators, contra-indicators, and risk factors including any physical, psychological, or situational factors related to the abortion."

Attorneys from the American Civil Liberties Union of Iowa and Planned Parenthood Federation of America are representing Iowa's leading abortion provider in the case. Planned Parenthood of the Heartland claims the law violates women's due process and equal protection guarantees under the Iowa Constitution, "singling out abortion for onerous and medically unnecessary restrictions that the Iowa Legislature does not impose upon any other medical procedure for which people may consent" and "discriminating against women on the basis of their sex and on the basis of gender stereotypes."

In addition, the lawsuit argues the new law violates due process for Planned Parenthood "by failing to provide physicians with fair notice of the conduct required of them, and failing to provide sufficient guidance to the Board of Medicine to prevent arbitrary and discriminatory enforcement of the Act, specifically with respect to the requirement that women receive information based on nonexistent state-created materials [...]."

Most Iowa laws go into effect at the beginning of a new fiscal year on July 1, but Republicans stipulated that Senate File 471, "being deemed of immediate importance, takes effect upon enactment." At a May 3 press conference (full audio at Radio Iowa), Rita Bettis of the ACLU warned the law "will immediately interrupt the appointments and lives of women already sceduled to have abortion procedures that very day and following days [...] That was reckless on the part of Iowa legislators and it immediately throws the lives of women and medical services in Iowa into a state of chaos.”

Only a handful of other states have enacted 72-hour waiting periods. Planned Parenthood of the Heartland President/CEO Suzanna de Baca said yesterday that the law "will strip access away from the most vulnerable women who need abortion care."

The women most affected by the burdens of the three-day forced waiting period and two-trip requirement are those who already face barriers to care, including low-income women, and victims of intimate partner violence or sexual assault – as well as women with pregnancies with severe fetal anomalies, and those with medical complications that do not fall under the extremely narrow emergency exceptions in the law. In some cases, the extra trips and other burdens created by the 72-hour forced waiting period and two-trip requirement will mean that a woman cannot get the health care she needs.

This afternoon, Polk County District Court Judge Jeffrey Farrell will consider the plaintiff's request for an emergency injunction to block enforcement of the law. It's unfortunate the case landed in that courtroom; in 2014, Farrell upheld an administrative rule banning all telemedicine abortions at Planned Parenthood clinics in Iowa. (A unanimous Iowa Supreme Court later overturned that decision.) I will update this post after the judge rules on the injunction.

UPDATE: Farrell denied Planned Parenthood's request, saying the standard for a temporary injunction is "really tough." He cited a 1992 U.S. Supreme Court case that upheld a 24-hour waiting period in Pennsylvania. Farrell determined that while Senate File 471 will create a burden for women seeking an abortion, it's not clear the law will create an "undue burden."

It's worth noting that District Court Judge Karen Romano granted Planned Parenthood's request for a stay on the telemedicine abortion rule, which Farrell later upheld (wrongly). The Iowa Supreme Court determined that rule did create an undue burden. Planned Parenthood will appeal to the Supreme Court, since 44 women have appointments scheduled for May 5 that would be disrupted after Branstad signs the bill.

I enclose below the full petition outlining Planned Parenthood's case against the law, as well as an ACLU news release summarizing the key points.

ACLU of Iowa press release from May 3:

Des Moines, Iowa — Today the ACLU and Planned Parenthood filed a lawsuit asking the Polk County District Court to issue an emergency injunction to block provisions of a new abortion restriction that will be signed into law by Gov. Terry Branstad at 8:30 a.m. on Friday morning. That law requires a 72-hour forced waiting period for abortions at any stage of pregnancy. It also requires an additional, medically unnecessary clinic appointment for Iowa women seeking abortions.

The new abortion law will take effect immediately upon Branstad’s signing. That means the new law will immediately interrupt the appointments –and lives –of women already scheduled to have abortion procedures that day and the following days. (Normally, laws signed by the Governor after a legislative session do not go into effect until July.)

This reckless, immediate effective date will throw the lives of women and medical services in Iowa into a state of chaos.Some of those women are likely to be very near the point in their pregnancy at which they can no longer use medication abortion. As a result, they will be forced to decide between having a surgical procedure or being stopped from accessing a safe and legal abortion altogether.

With this in mind, ACLU and Planned Parenthood attorneys have filed this urgent request in state Court to protect women as soon as the law is signed this Friday. They asked the Court to set an emergency hearing prior to the bill being signed into law, with the goal of obtaining an injunction as soon as possible once it is signed to protect as many women as possible on an urgent basis.

UPDATE: Wednesday afternoon the ACLU and Planned Parenthood were granted a hearing in Polk County District Court, scheduled for 1:30 Thursday.

“This abortion restriction takes us back decades,” said Suzanna de Baca, Planned Parenthood of the Heartland President/CEO. “It is among the harshest in the nation and will strip access away from the most vulnerable women who need abortion care. The women most affected by the burdens of the three-day forced waiting period and two-trip requirement are those who already face barriers to care, including low-income women, and victims of intimate partner violence or sexual assault – as well as women with pregnancies with severe fetal anomalies, and those with medical complications that do not fall under the extremely narrow emergency exceptions in the law. In some cases, the extra trips and other burdens created by the 72-hour forced waiting period and two-trip requirement will mean that a woman cannot get the health care she needs.”

The 72-hour forced waiting period that creates the need for an additional, medically unnecessary clinic appointment is why medical experts like the American College of Obstetricians and Gynecologists oppose forced delay laws.

Rita Bettis, ACLU of Iowa Legal Director, said, “The additional burdens required by this law have no medical justification. They are intended to place barriers in the path of women seeking safe and legal abortion in our state. The restriction will risk women’s health and safety, and in some cases will prevent some women from being able to get an abortion at all. Especially in a rural state like Iowa, requiring a three-day waiting period and medically unjustified second visit makes it difficult for women who may have to drive hours to a health center. It also makes it more difficult for them to secure transportation, take off time from work, find child care, or keep the procedure private.”

This law would make Iowa one of only three states – joining Missouri and South Dakota—that require a 72-hour forced waiting period and two-trip requirement. Louisiana passed a similar law but it has been temporarily enjoined.

“This proposed law puts women’s health at risk by forcing a woman to have an abortion later in pregnancy and risk her health solely for political – not medical – reasons,” de Baca said. “This restriction is an outrageous, and we believe unconstitutional, violation of a woman’s right to access safe, legal abortion. We will continue to exhaust every avenue to fight back against these extreme legislative attacks on Iowa women.”

MAY 5 UPDATE: The Iowa Supreme Court has overturned a ruling by Judge Farrell against Planned Parenthood for a second time. William Petroski reported for the Des Moines Register,

Gov. Terry Branstad signed Senate File 471 at 8:30 a.m. Friday and the state's highest court responded less two hours later by granting a temporary injunction at the request of Planned Parenthood of the Heartland and the American Civil Liberties Union of Iowa. The order was signed by Justice David Wiggins. [...]

"This order immediately and temporarily blocks the challenged provisions of the law; the 72-hour minimum waiting period and medically unnecessary additional appointment," said Rita Bettis, ACLU-Iowa's legal director. The ruling means that Iowan women scheduled to have abortions Friday will be able to receive care as scheduled, she added.

Wiggins' order said the temporary injunction prohibits enforcement of the provisions until the high court has an opportunity to review a response filed by the Iowa attorney general's office. The response is due by noon Monday. The Iowa Supreme Court will then consider whether the injunction should remain in effect., Geoff Greenwood, a spokesman for Attorney General Tom Miller, said Friday that a response was being prepared.

Planned Parenthood notes the court’s action Friday allowed 44 women with scheduled abortions to proceed with their appointments. Suzanna de Baca, CEO of Planned Parenthood of the Heartland, says in a statement that the law had caused confusion for patients.

She says one woman had driven seven hours to her appointment Friday and then was told she couldn’t have the procedure that day. She says women were “angry and upset at the intrusion into their lives.”

Ben Hammes, a spokesman for Branstad, says the state believes the 72-hour wait period will ultimately be implemented.