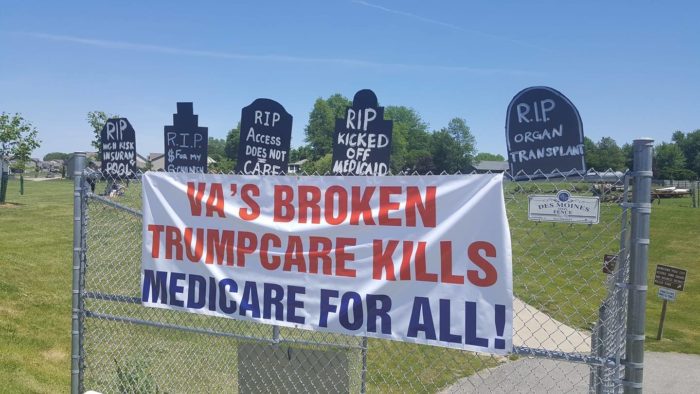 Elizabeth Dinschel, state leader of Action Iowa, makes the case for public protests and for good communication between activists and law enforcement. -promoted by desmoinesdem

Passive resistance is not the “high road.”  The world never changed because of a Facebook post or a counter event.  The world has, however, changed because of the brave, nonviolent direct actions taken by leaders such as John Lewis, Malcolm X, the Dalai Lama, Marsha P. Jackson, the organizers of the Arab Spring, the Orange Revolution, and many more nonviolent revolutions in Central and South America.

In America, however, we are being conditioned to believe that direct action is somehow rude or impedes on the free speech of other Americans. This is patently false and is a direct result of people enjoying their privilege. If a person cannot understand how civil disobedience could change the narrative of history or politics it is because they are treated with respect in public or can afford things such as food, healthcare, or housing. Are you uncomfortable?  Good, because that is what direct action is.

Direct action forces politicians to hear the messaging of people and groups they do not typically communicate with or, maybe, do not even care about.

In Iowa, state lawmakers have taken up issues they did not campaign on -- such as union busting with ALEC in tow. I stood in the capital, leading chants on the bullhorn with union members from across the state who felt like they were under attack. The protesters were from all over the political spectrum, but the only lawmakers to vote for gutting Chapter 20 were the Republicans. Citizen after citizen testified that they were a Republican, they voted for them, and they felt betrayed.

As a last insult, Governor Terry Branstad signed the dismantling of Chapter 20 with Drew Klein, a lobbyist for the ALEC backed Americans for Prosperity organization. But, if you want to find out how Senate Bill 213 moved through and ended up with Branstad and Klein, you will have to speculate. The Iowa Open Records Law applies to state agencies, universities, and most levels of state government, except the legislature can create its own “rules” that run counter to the Iowa Open Records Law.

The real truth is that most of our lawmakers, state and national, are cloaked in secrecy -- legally. Our U.S. representatives and senators do not have to respond to Freedom of Information Act (FOIA) requests. Their communications, writing, and papers never become part of the national historic record unless they make a personal decision to donate their papers, which they can cull prior to donation. Our lawmakers work in the dark. A DC staffer for a senator told me this winter that, “it's probably a good thing people can't see our emails.” The office erupted in laughter.

Transparency is not funny, it is vital to an open Democratic process and citizens across the political spectrum should demand complete transparency from intern to staffer to lawmaker. We have the right to know how every decision was made. This was the exact thing Congress and conservatives claimed to distrust Hillary Clinton for, so why aren't they holding themselves to the same standard?

Lawmakers can push out complete lies, like Senator Chuck Grassley stating that his constituents do not care about Russia, and we do not have the right to request his records to prove otherwise. Grassley was grilled at his townhalls, Action Iowa and Indivisible Iowa called his offices repeatedly, and 4DPAC paid $1,100 for a billboard near Grassley’s Des Moines office that said, "Senator Grassley: America needs an independent investigation." If those direct actions never happened, voters would have no idea that Iowans demanded an investigation and that Grassley lied.

Iowa is being smeared in the national media and rightfully so. The Republican-led state legislature passed the most restrictive abortion law, caused 15,000 women to lose access to their healthcare provider, and went along with privatized Medicaid. They aimed attacks at public school teachers and public servants with ALEC, their “fiscally conservative” budget (corporate tax breaks) has plummeted the state into a disastrous deficit, they pre-empted minimum wage hikes, passed dangerous gun legislation -- and they are just getting started. Our national representatives Steve King and Chuck Grassley routinely embarrass Iowans with racism and party over country support for disastrous policies that will have a profound impact on Iowans, particularly the ones who voted for Republicans.

The only way to deal with these lawmakers is to organize. We call, write, visit their offices, go to their townhalls, lead marches, and disrupt their fun activities like the recent Roast and Ride. Action Iowa and Indivisible Iowa’s roadside protest had the message “VA is broken, Trumpcare kills, Medicare for All!”

Senator Joni Ernst routinely exploits her status as a veteran to host events that make her oppositional constituents appear to not support veterans. That approach is underhanded and wrong. The progressive and liberal movement includes veterans, and we want veterans’ social, medical, and mental health issues addressed -- if Republicans claim anything else, it is a lie.

The new Right likes to build up the “us versus them” narrative with anything they have classified as “patriotic.” One area where this tension is boiling is with law enforcement. We can look back through history and see how there is institutionalized tension between police and communities of color. We know there have been cases of police misconduct and most police officers are just as horrified as Americans are.

As an activist, this is an area I believe we can tear down walls and build bridges. We can say “black lives matter” and support our police. We need to build more diverse police departments, teach de-escalation, and help the police do their jobs. With more rollbacks on mental health and domestic violence assistance in Iowa, our police departments will be dealing with more community problems that they do not have the resources to fix. We should not allow outside influences to disrupt our community relationships. Supporting communities and law enforcement is not a partisan issue and we should dismantle that argument immediately.

As an organizer, I have always approached police with the attitude that they would keep us safe, keep the community safe, and uphold our constitutional rights. I have faced militarized police in cities outside of Iowa, but I cannot allow that experience to prevent me from being the change I want to see. In Iowa, in both urban and rural areas, the cities and police departments have been concerned about our constitutional rights and the safety of the communities they serve. In large city protests, organizers encourage thanking police and handing out goodies. It definitely helps build a positive relationship with police and helps to heal our communities. Police should not be the focus of our displeasure -- it should be lawmakers. We cannot heal any of our community wounds with violence, especially towards other members of our communities.

In planning the Roast and Ride Protest, the organizers (myself, Eleanor Taft, Jess McCord, Chris Laursen, and Mike McKinley) decided to withhold the location until the morning of, a common practice. But faced with pressure from new activists wanting to know where the event would be, we apprehensively released the location a week ahead of time.

I was contacted the next day by the Chief of Police in Polk City who was extremely willing to help, but I could also tell he was a little bit nervous. I reassured him we would be good visitors to the city and would follow police guidance and the city ordinances. He was extremely relieved. As activists, we must do a better job of working with law enforcement and helping to build our communities, even when we are disappointed with actions of law enforcement. We have to be leaders and not succumb to the us vs. them mentality. Even if groups are planning on civil disobedience that leads to arrests, nonviolence should always be followed in direct actions.

Not surprisingly, the Roast and Ride organizers changed the route exclusively around where we had arranged our First Amendment space in Polk City Square the morning of the event. When we met the Chief of Polk City Police in the morning, he told us the organizers changed the route that morning and he found out when his deputies saw the Roast and Ride organizers putting out directional signs. He was able to direct us to another city owned park, a traditional First Amendment space as interpreted by the Supreme Court, and posted a deputy with us to make sure we were safe and people riding along the route would be safe as well.

The police did a great service to their community and acted with complete impartiality and upheld the Constitution. We are very grateful for their service and our ability to take our message to the 500+ riders and hundreds of passerbys without incident. We are also grateful that protesters were safe and the ride was safe for the 500+ people who participated. 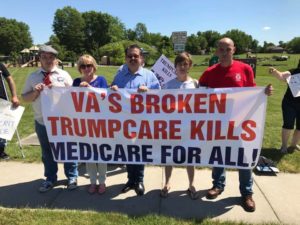 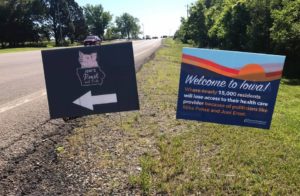 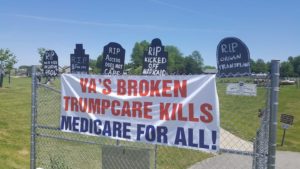 Vice President Mike Pence stood in front of Roast and Ride attendees at the Expo in Boone, most of whom were presumably from Iowa, and bragged about a disastrous healthcare bill that would kick many of them off of their insurance. According to the Kaiser Family Foundation, 188,000 Iowans do not have insurance, 47 percent of Iowans are eligible for Medicaid, and 87 percent of Iowans enrolled in the Affordable Care Act receive subsidies. Iowa cannot afford to be silent or absent when we have the opportunity to deliver a strong message that opposes their rhetoric. I hope the protesters were in the back of the riders’ minds as Pence spoke.

Direct action does not go unnoticed. After Grassley's and Ernst's contentious townhalls in February, President Donald Trump tweeted, “The so-called angry crowds in home districts of some Republicans are actually, in numerous cases, planned out by liberal activists. Sad!”

Yes, Mr. Trump, we made Facebook events and arranged carpools. We will take the name calling, false accusations of being paid, and even the attempts to silence the First Amendment with fascist-style state laws and keep fighting for all Americans. We must encourage direct action and keep the country and its leaders talking about the resistance.

People like to make parallels to previous fascist leaders, but this is different because we resist and they are clearly afraid of us. Together we are powerful, but not if we hide behind the “high road” argument. We must take our message to the recipient in direct, nonviolent actions.