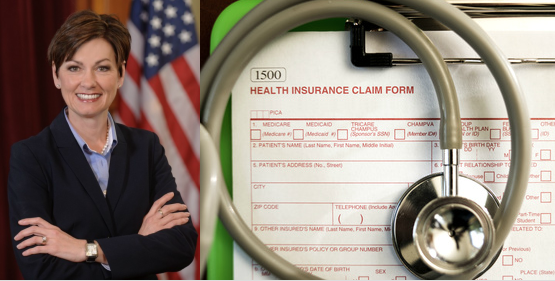 Governor Kim Reynolds continues to take credit for a major benefit of the Affordable Care Act, even as she calls on Congress to repeal and replace the 2010 health care reform law. During today’s Condition of the State address, the governor boasted that compared to a few years ago, “150,000 more Iowans have mental health coverage today and have access to more local and modern service.”

She didn’t mention that those Iowans gained health insurance only because the Affordable Care Act included funding to expand Medicaid.

The dismal state of access to mental health services in Iowa is a scandal: “47th in psychiatrists, 44th in mental health workforce availability and 51st (including the District of Columbia) in the ratio of state psychiatric beds to residents,” according to the National Alliance on Mental Illness. The latest statewide survey by Selzer & Co for the Des Moines Register found that 64 percent of Iowans disapprove and only 25 percent approve of how the state legislature and executive branch are handling mental health.

During today’s Condition of the State address, Reynolds returned to a favorite theme: the alleged failure of federal health care reform. My transcript of her remarks as delivered, starting around the 21:30 mark of this video:

Before the Affordable Care Act, Iowa had an individual insurance market with relatively low cost and high participation.

While I continue to call on Congress to repeal and replace the Affordable Care Act, we can’t wait for Congress to fix it. This session we must work together to pass legislation that gives Iowa farmers, small business owners and their workers access to affordable insurance.

We must continue our efforts to provide compassionate mental health care.

In 2013, we redesigned Iowa’s mental health system with bipartisan input and support. We moved from a county-by-county system to a regional network, ensuring the same core services for all Iowans, no matter where they live.

150,000 more Iowans have mental health coverage today and have access to more local and modern service.

We’ve invested $2 billion in mental health services. And in 2016 we invested $4 million in a new psychiatric medical residency program to recruit and retain more psychiatrists.

A casual listener would assume 150,000 Iowans gained coverage thanks to state investments and the 2013 reworking of regional mental health networks. Not true at all.

The Iowa Health and Wellness Plan was our state’s version of Medicaid expansion, adopted in 2013 because Democrats who controlled the Iowa Senate demanded it. Reynolds’ mentor, then Governor Terry Branstad, had repeatedly opposed that policy, saying Medicaid expansion “has not worked to improve health” and “fails the people that we really intend to help.”

Branstad’s top priority that year was reducing commercial property taxes. During the closing days of the 2013 legislative session, Senate Democrats agreed to pass a commercial property tax cut. In turn, Branstad agreed to sign a bill that did not expand traditional Medicaid, but used federal funding to help Iowans with income up to 138 percent of the poverty level to obtain policies through private health insurance providers.

Reynolds claimed in today’s speech, “Before the Affordable Care Act, Iowa had an individual insurance market with relatively low cost and high participation.” However, that market was not accessible to at least 150,000 low-income Iowans. Without the Affordable Care Act and Democratic state lawmakers who used their leverage effectively, the Branstad administration never would have enacted anything like the policy Reynolds now hails as giving more than 150,000 Iowans “access to mental health and substance abuse care.”

Over the summer and again in September, Reynolds endorsed Congressional GOP efforts to supplant the Affordable Care Act. All of those bills called for massive federal cuts to Medicaid, hurting hospitals and nursing homes and virtually assuring that states would be unable to maintain expanded coverage. Partly for that reason, eight Republican governors opposed the final Graham-Cassidy proposal.

So I was stunned to hear the governor declare on Iowa Public Television’s “Iowa Press” program in early December, “We have 150,000 Iowans today that have coverage that didn’t have it before. So they have access to mental health care.” No one on the panel followed up. Nor, to my knowledge, has Reynolds been asked at any press conference: Why is she praising this trend while trashing the Affordable Care Act? In light of our state budget crunch, how does she envision keeping those 150,000 Iowans covered if Congress follows her advice and repeals the federal law?

Reynolds felt emboldened to push this hypocritical talking point during her highest-profile speech of the year. She’ll probably keep going back to this well until someone forces her to explain the contradiction.

Top image: Screen shot from Governor Reynolds delivering her Condition of the State address on January 9.