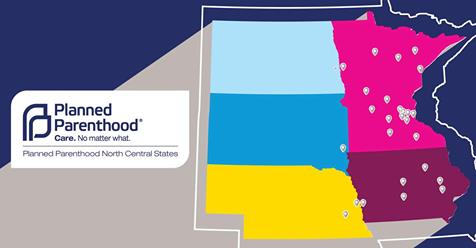 Planned Parenthood of the Heartland, which has served Iowa and Nebraska, will merge this summer with the organization covering Minnesota, North Dakota, and South Dakota to create a new regional affiliate called Planned Parenthood North Central States, the non-profit announced on May 22.

Suzanna de Baca, who has been Planned Parenthood of the Heartland's president and CEO since Jill June retired in 2014, will leave a staff position to serve on the new affiliate's board of directors. Erin Davison-Rippey will be its Iowa executive director and Jenna Knox its deputy state director. Up to now, Davison-Rippey has served as Planned Parenthood of the Heartland's director of government affairs, while Knox has has been the organization's director of strategic partnerships and development. (Apart from her day job, Davison-Rippey was recently elected vice chair of the Polk County Democrats.)

After Iowa Republicans excluded abortion providers from a new state family planning program last year, Planned Parenthood of the Heartland closed its clinics in Sioux City, Burlington, Bettendorf, and Keokuk. The remaining eight clinics in Iowa will be among "29 health centers serving more than 114,00 patients across Iowa, Nebraska, Minnesota, South Dakota, and North Dakota," according to the news release enclosed in full below.

The merger will not affect Planned Parenthood's advocacy for reproductive rights or its role in a lawsuit challenging Iowa's new ban on most abortions after a fetal heartbeat can be detected.

Republican lawmakers considered legislation this year to block Planned Parenthood of the Heartland from receiving federal sex education funding in Iowa. A last-minute deal removed that language from a budget bill on the final day of the legislature's session.

“Planned Parenthood has been a critical part of people’s lives for generations,” said Davison-Rippey. “In this current political environment, we know that we must fight even harder to defend the rights that our mothers, grandmothers and great-grandmothers secured, and it is my privilege to lead this work in Iowa.”

“Nebraska is an amazing state with a lot of amazing people, and I am excited to lead the work of responding to our communities,” said Curry Grubb. “My top priority is to make sure that the people who trust Planned Parenthood with their health care and turn to us for education are being listened to and heard, and that what we do is directly responsive to what they need.”

In the course of integration, PPHeartland President/CEO Suzanna de Baca will be transitioning leadership, effective September 1. Sarah Stoesz, a nationally recognized leader in health care based in St. Paul, will serve as President and CEO of Planned Parenthood North Central States, and de Baca will serve on the board of directors.

“Over a year in the making, this is a positive, proactive approach focused on growth and expanding our presence here in this politically hostile area of the country,” said de Baca. “Together, with the continued support and advocacy of our hundreds of thousands of supporters, Planned Parenthood is unstoppable – and we are excited to embark on this new phase of our legacy. We have withstood attacks for 101 years for daring to give people control over their reproductive health. Like the leaders before us who boldly transformed this organization, we are evolving and taking control of our own future.

“Since I joined Planned Parenthood of the Heartland in 2014, it has been my mission to strengthen and grow this incredible organization. I am so proud that despite the challenges we have faced, Planned Parenthood is stable, strong, and ready to grow through this formidable regional affiliate. We have been on the forefront of reproductive and sexual health for more than a century, and we will be here delivering top-notch care across Iowa and Nebraska – no matter what.”