Did Iowa House Republicans commit to nonpartisan map in 2021?

As bad-faith political arguments go, it would be hard to top a headline from a recent Iowa House Republican newsletter, amplified on Twitter: "Congressional Democrats Plan to Overturn Nonpartisan Redistricting in Iowa."

U.S. House Resolution 1 was designed to ban gerrymandering nationwide "by requiring independent commissions instead of state legislatures to draw congressional maps." But in the Iowa GOP's fun-house-mirror view, the federal bill would "inject politics into an already nonpartisan redistricting process."

The good news is, this stunt puts House Republicans on record opposing any change to the system in use since the 1980s. "There’s no reason to change a process in Iowa that is respected throughout the country and is working well," the newsletter argues.

The next step is getting top lawmakers and Governor Kim Reynolds to promise not to exploit a little-known provision in state law to enact a gerrymander in 2021.

Iowa Code Section 42.4 instructs the LSA to draw districts with roughly equal population, "composed of convenient contiguous territory," that are "reasonably compact" and not favoring any political party, elected official, or racial or language group. Section 2413 of H.R. 1 covers some of the same ground (equal population, not favoring one party) but lays out slightly different criteria.

For instance, Iowa Code calls for district lines to "coincide with the boundaries of political subdivisions" (cities and counties) when possible, whereas the Congressional bill says "Districts shall minimize the division of communities of interest, neighborhoods, and political subdivisions to the extent practicable." Communities of interest could include "ethnic, economic, social, cultural, geographic or historic identities."

According to the House Republican hot take, H.R. 1

fundamentally changes the fair and nonpartisan redistricting model that Iowa has used for nearly 40 years to draw congressional district lines. This new commission injects politics into redistricting by requiring that members of the commission be registered with a political party.

That overstates the significance of possible changes. Remember, the federal bill would create balanced commissions and prohibit partisan gerrymanders.

In any event, the GOP-controlled U.S. Senate would never pass the "sweeping" election reforms House Democrats introduced, nor would President Donald Trump sign the bill.

So regardless of how one interprets the federal proposal, Iowa will enter the next round of redistricting with the "current fair and nonpartisan redistricting process" the Republican newsletter hailed as a "model example" for the country. UPDATE: The U.S. House on March 7 amended the bill to exempt Iowa from the section on redistricting commissions, provided we don't change our system.

Are we safe from the prospect of gerrymandering, then? Not quite.

Iowa Code 42.3 spells out the timetable for the LSA to create and state lawmakers to consider new political maps. I've enclosed below a bullet-point version Ed Cook presented in his historical review of redistricting in Iowa.

By April 1, 2021, the LSA will deliver draft legislation that embodies the first plan. The Iowa House and Senate will consider the bill "expeditiously," with no amendments allowed "except those of a purely corrective nature."

If either chamber rejects the bill or the governor vetoes it, the LSA will draft a second set of district maps, taking into account the objections to the first plan, as long as those reasons don't conflict with mandatory criteria such as equal population or compactness. Again, state lawmakers will vote that plan up or down, with no substantive amendments allowed.

If the second plan fails, the LSA will draw up a third plan. This time, the legislation "shall be subject to amendment in the same manner as other bills." In other words, the majority party could amend it to a gerrymander.

Worth noting: neither party has controlled both chambers of the legislature and the governor's office in any redistricting year since Iowa adopted the current system. CORRECTION: Republicans had House and Senate majorities in 1981 under Governor Bob Ray.

Unless Democrats pick up at least five Iowa House seats in 2020, though, Republicans will maintain their trifecta in 2021.

While the GOP may not now be scheming to depart from precedent, seeing a nonpartisan map could make gerrymandering too hard to resist.

Most Iowa counties have declined in population since the last census, as people continue to seek better economic opportunities in larger metros. The next set of LSA maps could include more than half a dozen new state legislative districts in the Des Moines suburbs and Iowa City/Cedar Rapids corridor--just where Democratic candidates have been performing better lately.

Inevitably, a number of House or Senate Republicans representing smaller counties will be thrown into the same districts as fellow GOP incumbents. It happened to State Representatives Pat Grassley and Annette Sweeney in 2011.

Some of those conflicts could be resolved with retirements or relocations (then-Majority Leader Linda Upmeyer moved in 2011). But the past few election cycles have generated a lot of turnover in GOP legislative ranks, leaving fewer senior citizens who might step aside for rising stars.

If an LSA-drawn map threatens members of Republican leadership or well-liked colleagues, the majority party may find it more appealing to vote down the first two plans and amend the third to protect their incumbents and limit Democratic opportunities in the suburbs.

Dunking on Congressional Democrats with a spirited defense of nonpartisan redistricting is one thing. Adhering to that principle in the face of a bad map is another.

Speaker Upmeyer, Majority Leader Chris Hagenow, and caucus communications staff did not reply to Bleeding Heartland's inquiry last week on whether House Republicans will commit to adopting an LSA-drawn map without amendment after the next census.

I also sought comment from House State Government Committee Bobby Kaufmann. If he remains in that role, any LSA plans would run through his committee before moving to the House floor in 2021. Would he promise to pass a bill without amendment? Kaufmann responded via e-mail,

I am unwilling to comment on this unless you are planning to write about what inspired me to write about it in my column. You cannot call yourself objective (in my opinion) unless you also write about the fact that our new Democrat Congressional Majority has chosen to have their FIRST resolution be a resolution that would fundamentally change our redistricting process.
The silence is deafening on this so far.

I assured Kaufmann that H.R. 1 and its alleged impact on Iowa would prominently feature in this post. How did he think the federal proposal would "fundamentally" change our redistricting?

I am seeking the text of the bill from Congress but my understanding so far is that it would be a nationwide requirement to create a new board for redistricting comprised of Independents, Democrats, and Republicans. Our LSA staff are nonpartisan.
If that is not accurate please let me know but that’s the information I have so far.
I understand Congress wanting to address gerrymandering but I will loudly oppose any efforts that affects Iowa’s process.
If I am State Government Chair in 2021 I will not be amending LSA’s maps.

Iowa House Chief Clerk Carmine Boal continues to block me from the leaders' weekly news availabilities, but some reporter with credentials could follow up: will Upmeyer and Hagenow also pledge not to change any map that comes to the chamber?

Staff for the governor have said I cannot attend her press conferences, because I'm not credentialed in the Iowa House. Someone with access could break news by asking Reynolds whether she will insist that lawmakers not amend any redistricting plan.

In reality, the only way to guarantee Iowa will adopt a nonpartisan map is to elect a Democratic House majority in 2020.

P.S.- The House GOP newsletter article concluded, "Corruption, gerrymandering and other issues may be problems in other states, but they are not issues in Iowa. Nor should Congressional Democrats be permitted to inject politics into an already nonpartisan redistricting process."

If only Republicans were so staunchly opposed to politicizing the judicial selection system our state has used since 1962.

UPDATE: Former GOP State Representative Darrell Hanson was in the legislature in 1981 and commented, "GOP congressman Cooper Evans (who had been a member of the Iowa House when we enacted the redistricting system in the previous general assembly) put heavy pressure on his former IA House GOP colleagues to reject the 3rd congressional plan and adopt a congressional plan designed in his office, but there was little support for that in the Iowa legislature." Hanson added,

I could be wrong, but I'm not very concerned about the possibility of the legislature gerrymandering the congressional districts or the state legislative districts. Because of a combination of state law, constitutional requirements, and a 1972 Iowa Supreme Court decision, by the time the legislature gets to amend the 3rd plan, the universe of available options should be extremely narrow.

Give[n] that the staff will almost certainly try to minimize the population deviation in plans 1-3, I doubt there will be any room for the legislature to adopt a plan of its own that would pass legal muster AND provide a partisan advantage to the majority party. That would especially be true for congressional districts where the inability to split counties and the clustering of large population counties in eastern Iowa really limits the universe of available options, but it would probably also be unlikely for state legislative districts.

My impression is that computer programs make this kind of work easier than it would have been 30 or 40 years ago. When I suggested that to Hanson, he replied,

The computer program we used in 1991 was a mapping program that required a human user to draw boundaries down to the census block level (or maybe census tract), and the computer would display population and compactness measurements as the map was being built. The 4 caucuses [Democrats and Republicans in the state House and Senate] had a version that included voter registration info and a bunch of past election results, so we could also see the changes in party composition as we went. The LSB [Legislative Services Bureau] computer didn't have that political data, of course.

Probably the only thing that today's computers could do that ours couldn't would be if they can automate the process of building the maps. That would generate more alternatives to evaluate, but it wouldn't negate the impact of the "as nearly equal as practical" provision or the requirement to keep counties intact in congressional districts. At the congressional level, I was able to draw just about every reasonably compliant potential congressional plan in just a few evenings of work, so the current computers probably wouldn't add much to that process. It would be different, though, for legislative maps because it took a long time to build one of them if it was done without reference to the congressional plan.

However, I believe it is still very difficult come up with a legislative map in Iowa that significantly alters the overall partisan balance, and it becomes even more unlikely when the legislature would have to do so while meeting or beating the staff's Plan 3 map on both the population standard and the division of political subdivision standard. 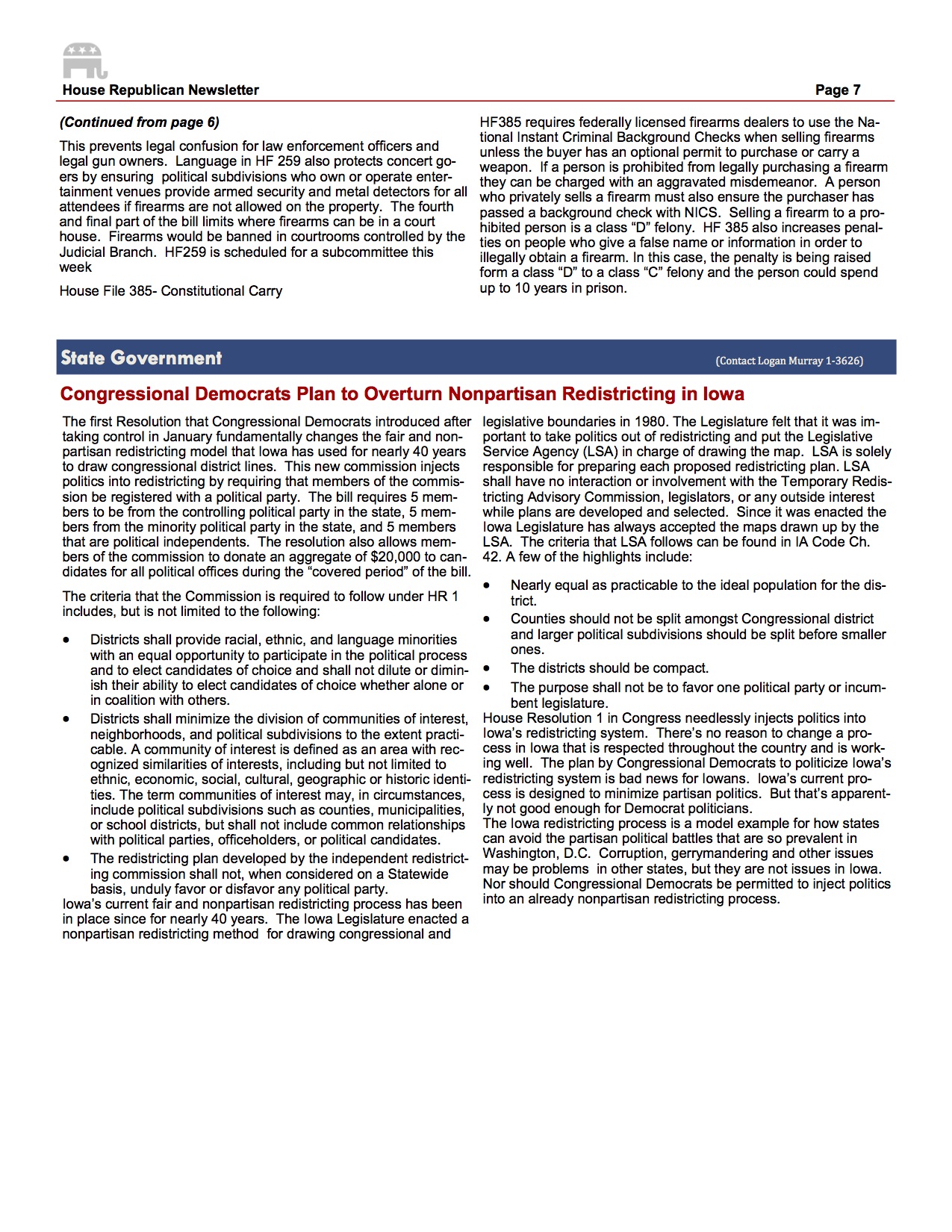 Appendix 2: Redistricting in Iowa, a report by Ed Cook

Appendix 3: Pages 101-103 of Cook's report, highlighting the constraints on legislative consideration of the redistricting plans. 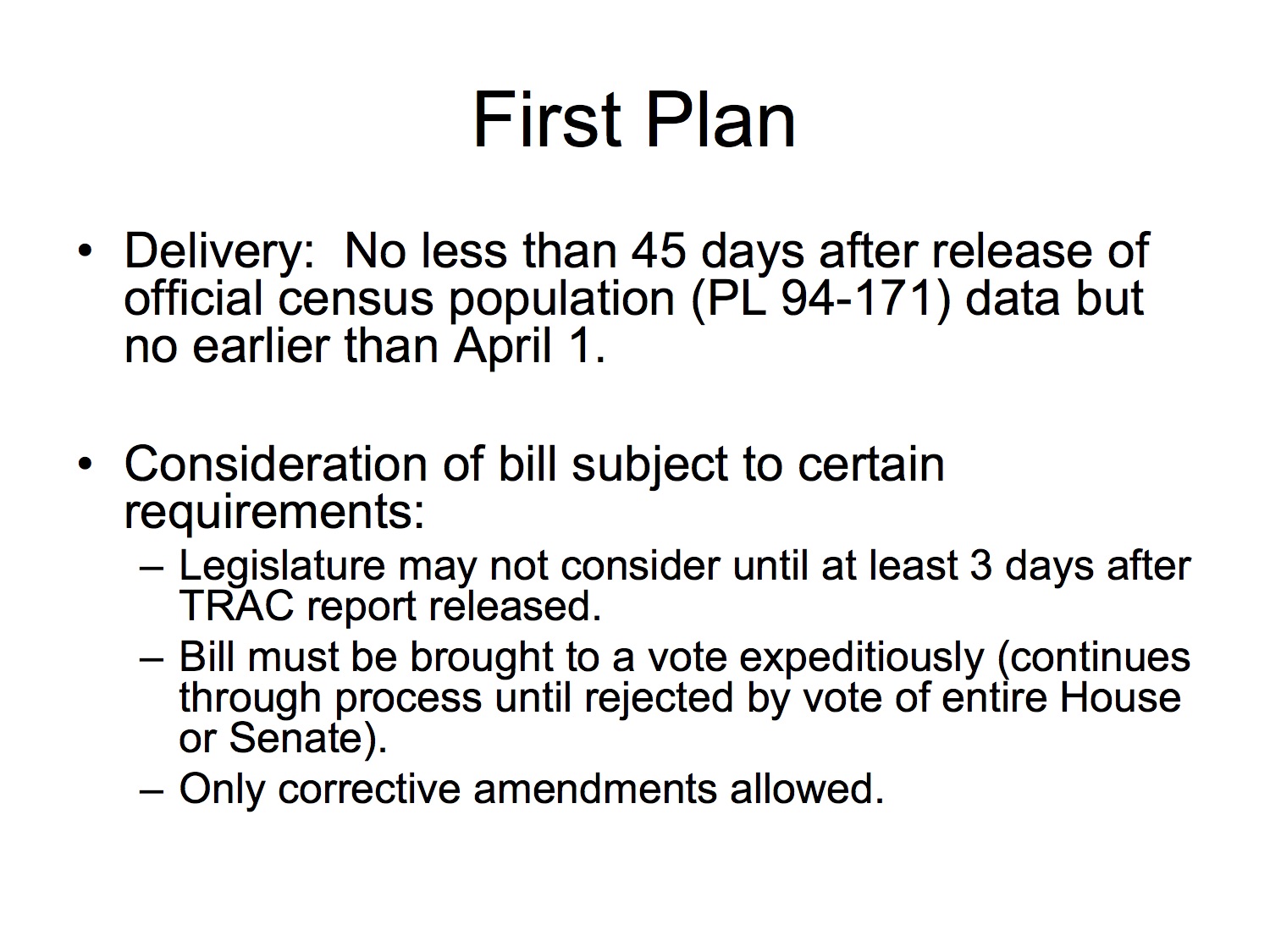 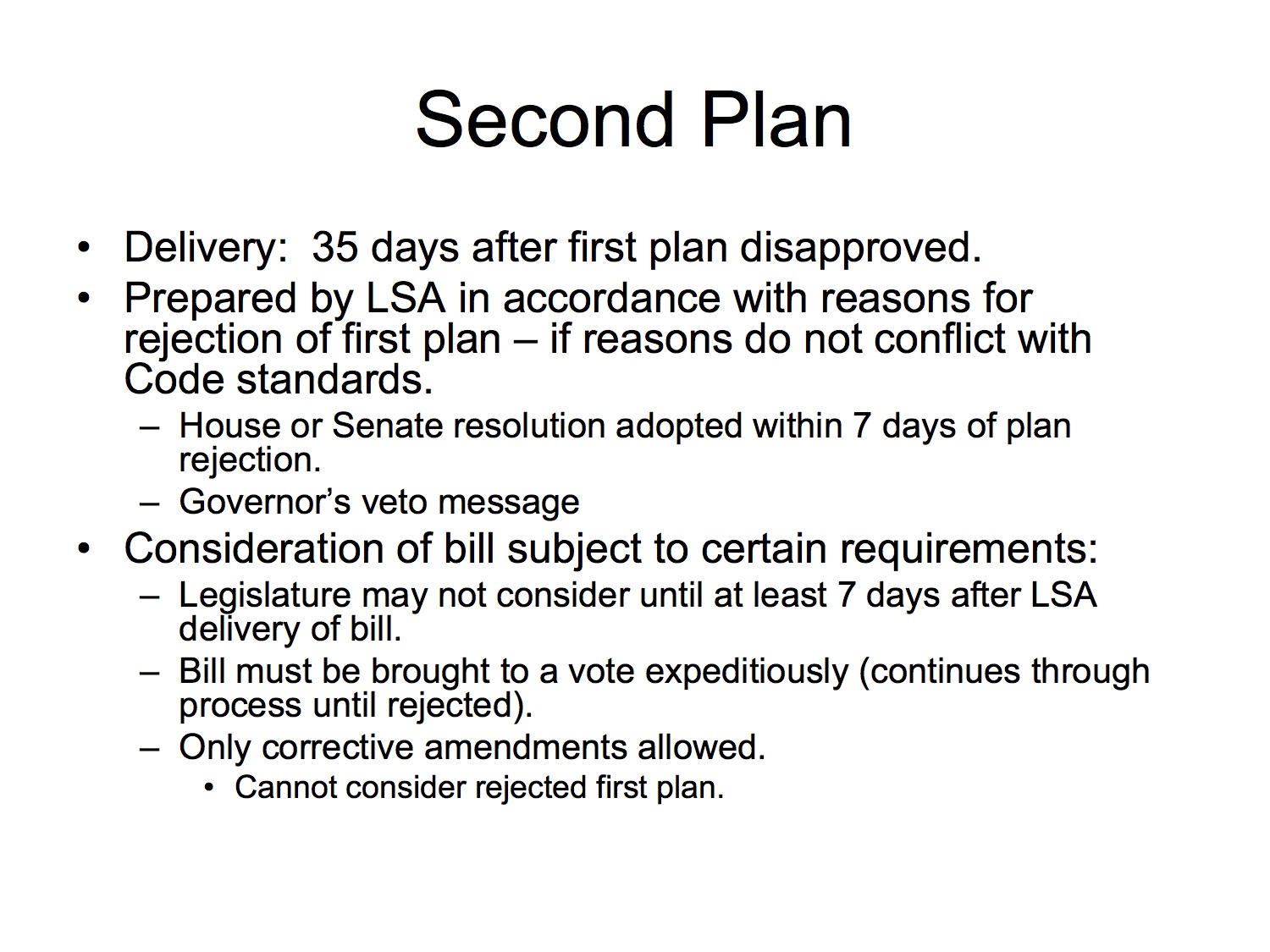 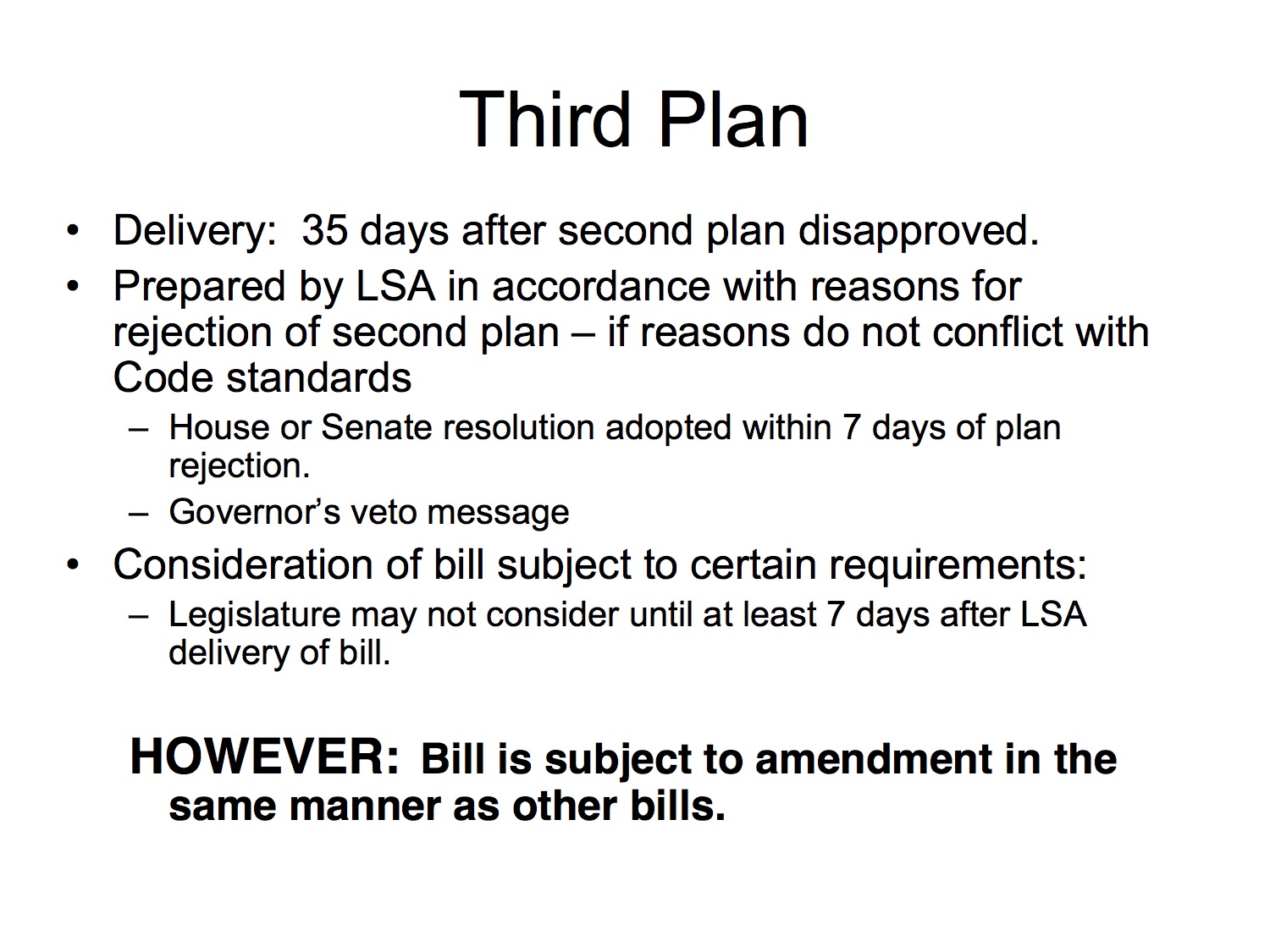