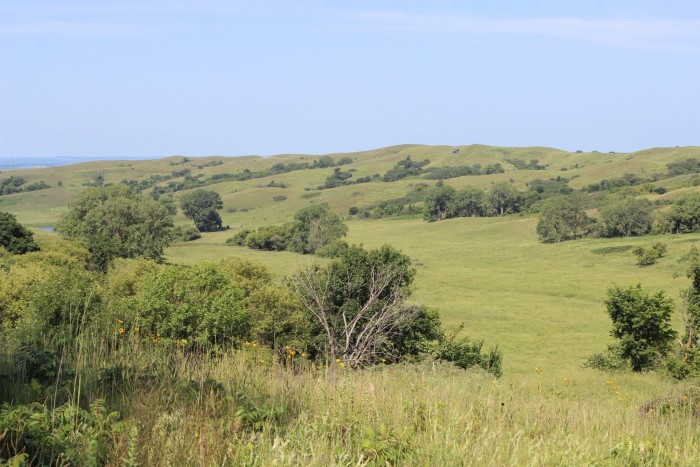 David Hurd passed away in Des Moines this weekend at the age of 86. Police have ruled out foul play in his deadly fall from his condominium building but have not announced whether he took his own life or fell accidentally. He had been suffering from Lewy body disease, a progressive condition.

Hurd was a legendary figure in local business circles, a past CEO of Principal Financial and member of the Iowa Business Hall of Fame since 1994. He left a bigger mark on the capital city than most people of comparable wealth have done. The Des Moines Register’s Lissandra Villa wrote about some of his philanthropic contributions here.

Many progressive organizations benefited from Hurd’s generosity, but it would be particularly hard to overstate how much he did for Iowa’s environmental community. Morgan Gstalter reported for the Register on Hurd’s gift that allowed the Nature Conservancy to acquire the first portion of the Broken Kettle Grasslands in the Loess Hills area: “Now at 3,217 acres, Broken Kettle is Iowa’s largest remaining native prairie and is home to bison and rattlesnakes.” The photo at the top of this post shows a tiny part of the stunning landscape. That gift alone would have secured Hurd’s legacy in the environmental world, but he was just getting started.

I became acquainted with Hurd during several years when we served together on the Iowa Environmental Council board. He was a co-founder of the organization. A few qualities stick out in my mind. First, he was attentive but generally quiet during meetings–the opposite of some business types who tend to dominate group conversations. Possibly reading my mind, Principal’s current CEO Dan Houston told the Register that Hurd was “one of the smartest guys you’d ever meet” but also “a very humble man, very capable, diverse, global, international and kind. He listened so, so very well.” Yes. Hurd was frequently the smartest guy in the room, but he never made a big deal about being the smartest guy in the room.

Hurd didn’t throw his weight around. He never pulled rank on any other board member, despite having given more money to the council than anyone else. I never heard of him trying to interfere with staff work, which large benefactors of many organizations have been known to do. When new ideas or programs were floated, he wanted to know about real-world impact: how would doing this thing potentially make Iowa’s water cleaner, or reduce greenhouse gas emissions?

Even more unusual for a prominent person in the business community, Hurd did not restrict his giving to environmental organizations I consider “politically correct,” such as the Iowa Natural Heritage Foundation or the Nature Conservancy. He supported non-profits that opposed powerful corporate interests in our state. I’m thinking not only of the Iowa Environmental Council, which pushed for water quality rules that Big Ag groups fought all the way to the Iowa Supreme Court. He was a consistent donor to 1000 Friends of Iowa (on whose board I also serve), and our sustainable land use agenda is not popular with developers.

During his retirement, Hurd helped create the local Scrabble club. When people who had played against him would talk about how competitive he was at the game, I was always amused. In other contexts, he came across as laid back and didn’t give off a competitive vibe at all–which also struck me as atypical for a major corporation’s onetime CEO.

At the CNN Democratic candidates’ town hall a few days before the Iowa caucuses, I spotted David and his wife Trudy in the audience and went over to say a quick hello. I wish I had known that was my chance to say goodbye.