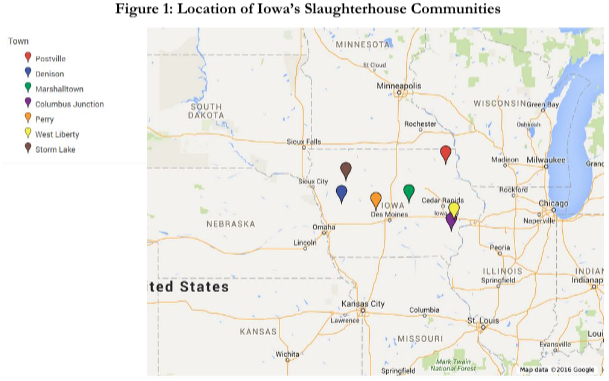 Austin Frerick, an Iowa native and economist who has worked at the Institute for Research on Poverty and the Congressional Research Service, makes a distinctive case for raising the minimum wage, last increased in Iowa in January 2007. -promoted by desmoinesdem

All of the states that border Iowa, except one, have raised their minimum wage above the federal level. In fact, a majority of states in the union have a higher one. A recent study estimated that 413,000 Iowa workers would benefit from a wage increase to at least $12 and most of the benefits would accrue to full-time adult women. The public also already decidedly supports this action as a recent Des Moines Register poll found that nearly two-thirds of Iowans favored raising it. This debate is especially relevant for Iowans employed in the numerous slaughterhouses that dot the state.

Company towns, once a relic of America’s industrial past, have reemerged in American society, notably in rural Iowa slaughterhouse communities. This occurred because of a market climate that made their monopsony position in these communities attractive to firms. This predicament causes a market failure. Therefore, raising Iowa’s minimum wage will correct this market distortion for these especially vulnerable Iowans.

Despite the significant role company towns played in U.S. history, scholars struggle to offer a concise definition for ‘company town,’ as this term encompasses a diverse range of communities with important differences in administrative structure, industrial base, and location. No consensus threshold exists for the percentage of labor employment by one firm when classifying whether a town can be labeled a company town or not. For this reason, the concept of a company town has encompassed a wide range of communities over the years. However, for simplicity sake, I define a company town as the close association of a small town to the production activity of a single firm.

Throughout their history, company towns have been examples of a market monopsony. The definition of the term is similar to that of monopoly, but occurs on the demand side rather than the supply side. Thus, in a monopsony, demand/buying power is concentrated in one source. In the case of company towns, these firms are the only employers in these communities. As a result, they have a monopsony in the labor market. Those seeking employment have to accept the wages and benefits offered by the firm. This predicament means that if workers do not, they will have little chance of employment in the community, and they likely will have to move. Workers have little agency in this situation, and as a result, firms benefit heavily from this arrangement, as it allows them to essentially dictate wages in the labor market.

The meatpacking industry has shifted its production to these rural company towns for several reasons. Historian Wilson J. Warren argues that the history of slaughterhouses in the United States contains four main development phases in the Midwest: Merchant Wholesaling (1820-1865), Terminal Marketing (1865-1950), Early Direct Buying (1920s-1950s), and Modern Direct Buying (1960-Now). In the most recent phase, Direct Buying, slaughterhouses moved from urban regional centers to isolated rural communities. This phase started with the construction of the IBP (Iowa Beef Processors) plant in Denison, Iowa in 1961. Two industry veterans opened this plant because they thought that the industry practices at the time were antiquated. This plant revolutionized the industry in three main ways: location, layout, and labor.

First, the company located the plant in the center of a large cattle-producing area. The company could now “purchase cattle directly from the farmer, eliminating the need for middlemen, and reducing transportation costs and the shrinkage and bruising associated with transporting animals long distance.” Second, the plant itself had only one floor, whereas, prior to this plant, slaughterhouses contained multiple stories. This modification in turn led to the third change, as this physical change allowed for greater automation and the development of a disassembly line. The modification also allowed IBP “to take the skill out of every step” of butchering. One of the company’s founders explained to Newsweek in 1985, “We wanted to be able to take boys right off the farm and we’ve done it.” Because this new plant reduced operating costs on multiple fronts, it forever changed the business model for the industry. Workers now work more hours in less safe conditions for less money. Iowa’s packing communities include Columbus Junction, Denison, Marshalltown, Perry, Postville, Storm Lake, and West Liberty.

Company towns, once relics, reemerged in this instance because of the possible labor savings. The firm’s monopsony position allowed them to drive down labor cost in the various ways. The current predicament benefits them as the labor buyer while disadvantaging the labor seller (townspeople). Many of these small towns have experienced declining populations and shrinking tax bases for decades. These slaughterhouses offered the chance to halt or at least slow this decline.

Furthermore, many of these slaughterhouses employ immigrant labor, which further enhances power asymmetries in favor of the plants, as in addition to providing a cheap labor source for these firms, “Many immigrants are willing to work for lower wages; they provide a flexible labor supply (e.g., willing to work overtime or at night, easy to hire/fire); and they have higher organizational flexibility (e.g., willingness to work in substandard environments).” Given immigrants’ peripheral position in society, this adds to these firms’ monopsony positions, as immigrants have even less agency than a typical worker. Although not always happy with the influx of these immigrants, these towns, for the most part, have embraced these new members of their community because the immigrants’ arrival have tended to reverse declining school enrollments, increase the tax base, and provide a sense of renewal.

Economist Gregory Mankiw defines a market failure as “the inability of some unregulated markets to allocate resources efficiently. When markets fail, public policy can potentially remedy the problem and increase economic efficiency.” A monopsony is an example of a market failure. Because it is a failure, public policy is needed to remedy the situation. While there is little public policy that can be done to quell a monopsony directly, legislation can be enacted to improve the conditions of labor and lessen the power of these firms. Economists William Boal and Michael Ransom describe the relationship between firms and labor in a monopsony,

In labor markets, “buyers” are employers, “sellers” are individual workers, the “good” is time and effort, and the “price” is the going wage or salary level. An employer who enjoys monopsony power holds down the wage by limiting the number of workers it hires. At the resulting inefficient level of employment, the value of the last worker's contribution to output is greater than the wage she or he receives.

In principle, a well-placed legal price floor (minimum wage) can alleviate a firm’s monopsony position in a labor market.

The time has come to revisit the relationship between labor and slaughterhouse firms in Iowa. Like the company towns of yesterday, the slaughterhouse communities of now operate on the same formula: low taxes, municipal subsidies, marginal support to their community, and hostility toward organized labor. The emergence of company towns in Iowa is a microcosm for meat production in American society, as rural America is dotted with similar communities. This predicament causes a market failure, and in order to correct this market distortion, the efforts to raise the minimum wage will especially help those employed in the slaughtering industry. Furthermore, the fact that many of the workers at these plants are immigrants likely enhances the slaughterhouse’s monopsony position and further complicates the power dynamics in these communities. At this point, it should not be a question of whether we should raise the wage; rather, it should be a question of how much should the wage be raised for hundreds of thousands of Iowans.