In 11 days, we will probably know who the next President is

Many thanks to Dan Guild for this historical perspective. You can read his past contributions to this blog here and here. -promoted by desmoinesdem

In any election there are a few predictable and important events. Few are as important as the Conventions. How important? Here are some basic facts:
1. In the 12 elections since 1968, the candidate leading in polling after the second convention has won the popular vote 11 times, and the only exception led by less than a point (McCain in 2008).

2. The candidate leading 3 weeks after the second convention has NEVER lost the popular vote.

3. No candidate has EVER won if they trailed after their convention. EVER.

4. 10 of 11 candidates who led by more than 5 after their convention won (Dukakis in ’88 is the only exception.

A table summarizing the data is set forth below. In addition, my database of presidential polling (which is the most complete online) is here.

But let's start looking at a chart and a table:

This is not to say that what happens after conventions doesn’t matter. But the data is clear, conventions set the tone for the rest of the race. So what follows here is a very deep dive into the data on Conventions.

I have been writing about Conventions since 2008 at Openleft. So here is a summary of the lessons I have learned:

1. Conventions can fundamentally remake the public‘s perception of a candidate

3. Turmoil at conventions can sink candidates

4. Campaigns seldom change between the last convention and the first debate.

1. Conventions can fundamentally remake the public's perception of a candidate

Conventions are unique. They focus attention on candidates and their personalities. As a result, they can completely change the public’s perception about them.

The largest bounce a candidate has ever received from a convention was Bill Clinton in 1992. Part of the reason for this was that Ross Perot declared he was leaving the race right before the Democratic Convention. But the Convention also significantly changed the public's perception of Bill Clinton. This shows the favorability rating of Bill Clinton in CBS polling.

As the data shows, Clinton went from -24 (which is as large as Hillary’s unfavorable gap, it is wrong to say Hillary and Trump are the two least liked candidates in modern history) to plus 6. Moreover, this was a lasting change in his perception. 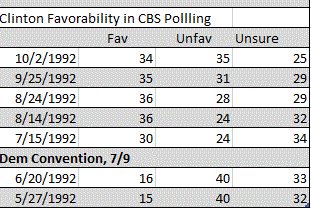 This is pretty typical. A review of the favorable ratings for John McCain shows a bounce in some polling after the GOP Convention in 2008.

The relevance this year seems obvious. Both Clinton and Trump are very disliked. The Conventions offer their best chance as reversing this trend.

But the obvious should be noted. Candidates are better known than they were 20 years ago before the conventions, and the electorate is more polarized. As a result it will be tougher to change perceptions than it was previously.

The ultimate cautionary tale about Vice Presidents remains the sad tale of George McGovern and his choice of Thomas Eagleton for Vice President. After the convention it become known that Eagleton had received elctro-shock therapy. Initially McGovern defended the Eagleton choice by saying he was “1,000 percent behind him”. Within days of saying that though, Eagleton asked off the ticket. This table shows the reaction. The Eagelton debacle actually left McGovern further behind that he was at the state of the Democratic Convention.

Neither candidate has decided to name their VP in advance of the convention like Kerry did in 2004 or Romney did in 2012. Based on my data this was a smart decision.

By the way: 538 is wrong about Clinton being the same place as Kerry was in 2004. By this time in 2004 Kerry had already named his Vice President. Given what we know about the effect of VP announcements on Convention Bounces, it is very wrong to compare the two and say they are in the same place.

3. Turmoil at conventions can sink candidates

There are numerous examples of conventions in turmoil. Two of the more famous were the 1968 and 1972 Democratic Conventions. In 1968 there were protests culminating in an attack of protesters in the streets. The event, which ultimately was termed a “police riot” in the investigation performed after the convention, severely hurt the bounce Humphrey got out of the Democratic Convention. Similarly, in 1972 there were floor fights over busing planks that were very divisive. The Convention was so badly managed McGovern did not perform his acceptance speech in prime time.

The table below summarizes the effect conventions have on the rest of the campaign. To be sure, events after them matter. Large leads have melted (1968, 1976) though the leading candidate still won.

But in general, campaigns stay static between conventions and election day. Caution is in order though: note that this is the earliest that both conventions have completed in modern political history.