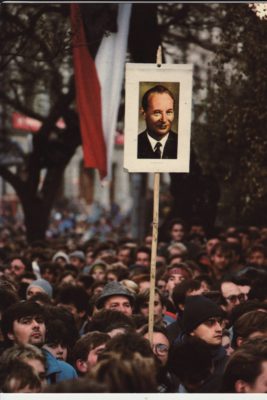 Having studied the fragility of democracy abroad, political scientist Kieran Williams draws lessons for America in the age of Trump. -promoted by desmoinesdem

In the weeks since the US election, a word that keeps popping up in commentary has been “normalization”. It has been used to refer to (and explain) efforts to accommodate behavior and attitudes that previously we would have dismissed as outrageous or improbable, and thus “abnormal”. The abnormal frightens us, and one way to manage that fear is by tricking ourselves, through euphemism and neologism, into thinking the abnormal as normal. As Peter Bradshaw puts it,

But for those of us who have studied Central and Eastern Europe, “normalization” is itself a euphemism, and one with a long history. It refers to the process by which a country is sidetracked from having a government responsive to the preferences and needs of the people. That diversion usually involves a shocking moment – an Event with a capital E – that was being prepared in plain sight yet still came as a surprise, accompanied by some degree of coercion or menace. Ultimately, however, “normalization” happens because people in a position to stop it decide to play along, and find ways to convince themselves that they are doing the right thing, for either the greater good or the narrow good of kith and kin.

For my doctorate, I spent a year in archives piecing together how “normalization” took place in Czechoslovakia after the “Prague Spring” of 1968. The country had suffered a sharp recession five years earlier that prompted a piecemeal package of reforms intended to rescue and revive the economy without undoing its fundamentals. A freer press and less police surveillance followed. This liberalization was personified by Alexander Dubček, a decent family man who came to power at age 46 with generally cautious, centrist inclinations. (November 27 would have been his ninety-fifth birthday.) He was popular, but the urban intelligentsia wished he would be bolder.

At the same time, a vocal minority felt existentially threatened by Dubček’s reforms, either because they might lose their place at the trough or because they were ardent Stalinists who feared he harbored a radical agenda. This anti-reform coalition teamed up with Moscow, coordinating attacks on Dubček with the Soviet press, which in turn worked with the KGB and Czechoslovak security police to create facts on the ground. Come August 1968, Dubček’s rivals plotted to seize power. The Soviet military provided the blunt force and a radio station in East Germany broadcast fake news in accented Czech and Slovak.

They did not succeed at first – the majority of Czechs and Slovaks opposed the foreign interference and through their non-violent resistance “voted” to continue the reforms. To prevail, “normalization” needed to let the shock of the Event sink in. As minds turned it over and over, trying to anticipate what might follow and how a person could survive politically, certain behaviors ensued that made “normalization” dismayingly easy.

The first was to get the nice Mr Dubček to do much of the hard work of smoothing the transition before leaving office himself.

The second was for others who had not collaborated with the Event to temporize and avoid taking a position on anything controversial.

The third was for them to act as if everything they did and said before the Event never happened.

The fourth was for them to convince themselves that the older, nastier Gustáv Husák, who replaced Dubček, would at least be more adept at dealing with Moscow.

The fifth was to rationalize their collaboration with “normalization” as the best way to prevent worse people on the fringe from doing greater harm.

The sixth was to agree to a purge of the elite and to gang up on the few dogged critics of “normalization”, in the hope that sacrificing and scapegoating them would save everyone else’s skin (it might, but it might not).

The seventh was for the media to preemptively bend their narratives to fit that of “normalization” in the hope that doing so would safeguard their editorial control (it didn’t).

The eighth was to allege that any students or workers who persisted in protesting through the winter of 1968-69 were the paid agents of foreign capitalists, foundations or Zionist centers. Eventually, all events before the Event would be interpreted as steps in a vast imaginary conspiracy, to deflect attention from the actual conspiracy between Moscow and Czechoslovak collaborators.

There are many ways in which authoritarian creep can be resisted, as enumerated eloquently by a prominent historian of Central and Eastern Europe, Timothy Snyder. But the initial challenge is not so much to persuade the powerless – with nothing to lose – that they in fact can make a difference; it is to press those in positions of power – and thus having everything to lose – to resist the temptation to be and do the lesser evil, because it is still an evil.

I hope, and largely expect, that we will look back someday and see that our fears for the US at the end of 2016 were overblown, that there was a world of difference between a small state in the Soviet bloc and a sovereign superpower whose institutions contain so many fail-safes and its culture so many red lines that “normalization” could not happen here. But the acclaimed Czech novelist Milan Kundera expressed that sort of confidence in his country after the Soviet invasion, in an upbeat essay published at the end of 1968. He dismissed as groundless the fears that were troubling his compatriots and driving some to flee abroad:

People who today are falling into depression and defeatism, lamenting that there are not enough assurances, that everything could end badly, that we could again end up in a marasmus of censorship and trials, that this or that could happen, are simply weak people, who can live only in illusions of certainty.

Seven years later Kundera himself emigrated to France, and has lived there ever since.

Top image: Portrait of Alexander Dubček from 1968, being carried in a demonstration in Czechoslovakia, November 1989.