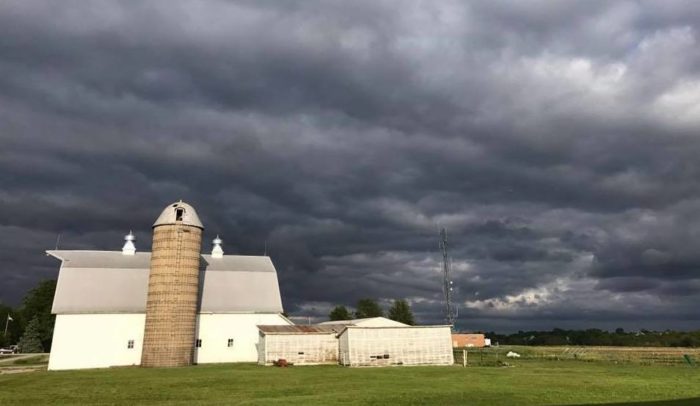 The Poor Farm, or as it was sometimes called, “The County Home,” is almost as old as the state of Iowa itself. It was created by the county in 1855 to be a place where folks who could not care for themselves, for a variety of reasons, could find food and shelter and work the farm. A very progressive idea for its time, though their good intentions did sometimes lead where those often do, and abuses were numerous over the next century. Nevertheless, they were doing what they believed was best for the indigent and the “insane.”

Social science improved and over the years better ways to help were developed, and the Poor Farm was eventually closed. It remained county property, and the structures were (mostly) well maintained. Eventually a large portion of it was registered as an historic landmark. Much of the rest of it was leased for commodity row cropping. Chatham Oaks was built on it, as was the Joint Emergency Communications Center, or JECC. And old cemetery was left undisturbed. Most of the rest of the land reverted to prairie.

Over the past two decades or so, many studies, dreams, plans and aspirations have been formed around this 160-acre plot on the west side of Iowa City. The county historical society did tons of research. Previous boards of supervisors and other entities dreamt of museums, parks and public spaces. Barn roofs were replaced and buildings shored up. Other than that, the old County Home sat frozen in time, a collection of quaint old farm buildings on the edge of town. Pleasant enough as a public space just like that, many people from many quarters had many ideas for what should be done. They ranged from stasis all the way through to simply selling it off (as most Iowa counties had already done long ago), and any imaginable concept in between. What was needed was some focus.

Prior to my election to the board, it began in earnest to address the future of the land. Last year they hired local engineering firm HBK as consultants. Their assignment: gather history, details, architectural data, public input, anything that would instruct us as to the various potential uses. In short: a 35,000-foot view of what is feasible. They developed three potential concepts, and presented them to the board over the last month or so. We voted, and in a vote as divided as can be on our five-member board, we selected concept three: “A New Century Farm.” I was joined by Supervisors Rod Sullivan and Mike Carberry in voting for it. Supervisors Janelle Rettig and Lisa Green-Douglass were opposed.

As I mentioned, HBK developed three scenarios after many public hearings, deep research, and meetings with every stakeholder they could identify. All three concepts protected the existing buildings and the historic landmark designations, and each built on the one before it.

Concept one was called “County Park,” and it involved historic preservation, signage, trails, charitable food production (as is going on now), conservation practices such as soil and water quality initiatives, community garden plots and an historical exhibit in the dairy barn. Most of the land that is presently leased for commodity cropland would remain that way.

The second concept built upon the first. Titled “Collaborative Landscape,” it added keyline swales, a newly-constructed pole barn, reconstructed prairie, and it switched the row-crops over to several smaller plots leased to farmers for commercial local food production. You should check with them yourselves, but as I understood it, this is the concept Supervisors Rettig and Green-Douglass has preferred.

Concept number three, as noted, was titled by HBK, “A New Century Farm.” It too incorporates all that is in the previous two concepts, while adding the idea a farm incubator and the potential for homes for a few of the people who work the farm. In my personal vision, that’s five to eight “tiny houses” leased to people for three-year increments, during which time they develop their farming and business skills under the tutelage of an independent 501(c)3, but we will need to see what is feasible. That’s HBK’s job in phase two.

The debate portion of the discussion was brief and somewhat contentious. That is unfortunate, but it’s how it goes sometimes. I can only speak for myself, so here is why I voted the way I did.

My career has been built around the support of local food production. My campaign was built on this, on stopping urban sprawl, and on building the local food economy. On my campaign website from the beginning were these words:

“The Johnson County 'Poor Farm' presents a wonderful opportunity for promoting and supporting local food and farming. It has the potential to become a farm and small food business incubator, similar to The Intervale in Burlington Vermont, or Will Allen's 'Growing Power' project in Milwaukee.”

What the concept we chose accomplishes is keeping all our options open. It may well be that the sort of farm incubator we envision proves not to be feasible, for reasons of economics, land use, or any other reasons. But shutting the door to the potential benefits of such an asset seemed unwise. It definitely merits further study.

This is an iterative process, something process engineers sometimes call a “rolling wave” process or “agile development model.” We build gradually, we learn from it, if something is unworkable, we adapt. Preemptively disallowing an asset as valuable and historically consistent with the use of the property – as the farm incubator could potentially be – is short-sighted and moves away from the goals of the strategic plan the entire Board approved. I will always argue in favor of more farms that grow local food for local folks, and that is why I voted as I did.