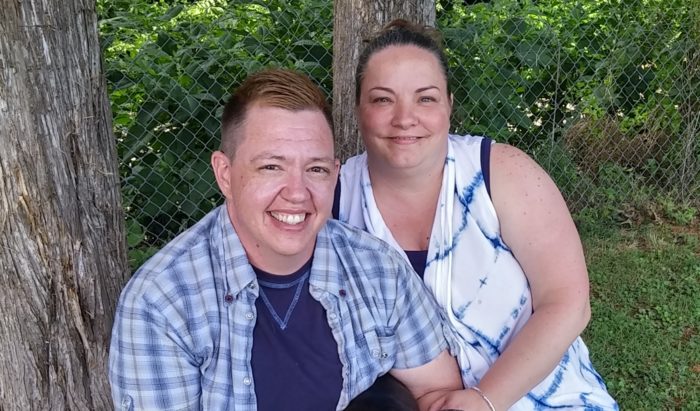 Jesse Vroegh is suing the Iowa Department of Corrections, the Iowa Department of Administrative Services, the insurance company Wellmark Blue Cross/Blue Shield of Iowa, and State Penitentiary Warden Patti Wachtendorf on four counts of discrimination on the basis of gender identity and sex. The plaintiff charges that while employed at the Iowa Correctional Institution for Women in Mitchellville, he "was continuously denied the use of restrooms and locker rooms consistent with his gender identity, because he is transgender."

Vroegh claims the state's actions violated the Civil Rights Act and provisions in the Iowa Constitution that prohibit discrimination on the basis of sex and require equal protection for historically disfavored groups. I enclose below the plaintiff's initial court filing and a press release providing more background on the case.

The ACLU of Iowa noted, "The first transgender employment discrimination case, Sommers v. Iowa Civil Rights Commission, was decided in 1983. But today’s action is the first case we’re aware of to be filed in Iowa District Court that asserts gender identity discrimination in employment since the Iowa Civil Rights Act was amended in 2007 to include gender identity and sexual orientation." A few state House and Senate Republicans joined almost all of the Democratic lawmakers to approve the new civil rights language during the first year Democrats had controlled both chambers of the legislature in more than a decade. Governor Chet Culver signed the bill into law.

UPDATE: Wellmark said in a statement, "The State of Iowa sponsors and designs its own employee health benefit plan and Wellmark administered the plan according to the plan design."

August 28 press release from the ACLU of Iowa:

Des Moines, Iowa —This morning the ACLU filed a lawsuit for a male Iowa prison nurse whose state employer, the Iowa Department of Corrections, denied him use of the men’s restrooms and locker rooms. It also denied him health care coverage—solely because he is transgender—for surgery he needed.
It is believed to be the first transgender rights case to be filed in the Iowa courts since 2007, when Iowa put gender identity protections into the law.

Jesse Vroegh (rhymes with “flew”), who worked as a nurse at the Iowa Department of Corrections (DOC) for seven years, was denied use of the men’s restrooms and locker rooms after he had transitioned and presented as male in every way for months. The DOC also denied him healthcare coverage for medically necessary surgery because he is transgender, even though the DOC provides coverage of the same type of surgery for employees who are cisgender.

Previously, Jesse had filed a complaint with the Iowa Civil Rights Commission. In late March, the commission determined that there was a “reasonable possibility” that it would later make a “probable cause determination” that illegal discrimination occurred. Now Jesse is proceeding with this lawsuit.

Fighting for the Rights of Other Transgender People

“This process has not been easy,” said Jesse. “I’m doing it because I feel I need to fight for the rights not only of transgender people who work for the state but for other Iowa workers as well. I’m not asking for any special treatment of myself or any other transgender person. All I’m asking for is that transgender people be treated the same way as people who are not transgender.”
He continues to be represented by the American Civil Liberties Union of Iowa, the ACLU LGBT Project, and ACLU of Iowa cooperating attorney Melissa Hasso of the Sherinian and Hasso Law Firm of Des Moines.

Rita Bettis, ACLU of Iowa Legal Director, said that to her knowledge, this is the first transgender rights case to be filed in the Iowa district court since 2007, when Iowa put gender identity protections into the law. “Jesse has a right to fair and equal treatment in the workplace, as do all Iowans. It’s disappointing that this case involves the State of Iowa, which should be providing leadership in creating work environments that are free from discrimination based on gender identity. But here, unfortunately, it has done just the opposite.”

Hasso added, “Transgender Iowans are just as important to the workplace and the community as anyone else. Jesse simply wants to be treated equally. The Iowa Civil Rights Act and the Iowa Constitution guarantee him that right. It is disappointing that the State of Iowa, through the Department of Corrections, has once again made the decision not to follow its own laws on this point. The State has repeatedly taken this position to the taxpayers’ detriment, as demonstrated by recent verdicts in favor of other state employees who suffered workplace discrimination. We would very much like to see the State take a leadership role in eliminating workplace discrimination rather than excusing it.”

Back in 2016, Jesse’s supervisors at the DOC told him and his union representative that they had made a final determination that Jesse would not be able to use the employee locker rooms and restrooms corresponding with his gender identity. They said they made the decision because transgender issues were “too controversial.”

Instead, he was required to use a unisex private restroom to dress and store his belongings, isolating him from all of his coworkers. Also, the unisex restroom didn’t have a shower, so unlike other employees, Vroegh had no option for showering at work.

It’s helpful for employers to make gender-neutral spaces available to employees who wish to use them. But what employers cannot do is require employees to use the private spaces and deny them the use of communal facilities, solely because they are transgender. Forcing an employee to use a separate space isolates the employee and sends the harmful message that he or she is abnormal and “less-than” his or her colleagues.

The DOC has further discriminated against Vroegh by denying him coverage for his medically necessary healthcare for no reason other than his being transgender. “The same type of surgical procedures that Vroegh needs are covered for state employees who are not transgender,” said Bettis. “This is the kind of discrimination Iowa law prohibits.”

Vroegh is no longer working for the DOC. Instead, he has become an assistant director of nursing at a private facility.

He is able to use the men’s facilities at his new workplace. His medical coverage at the new employer hasn’t started, and it’s not yet known what coverage is available.

The lawsuit is being filed under the Iowa Civil Rights Act and the equal protection provisions of the Iowa Constitution.

Top image: Jesse Vroegh and his wife, Jackie. Photo provided by the ACLU of Iowa.