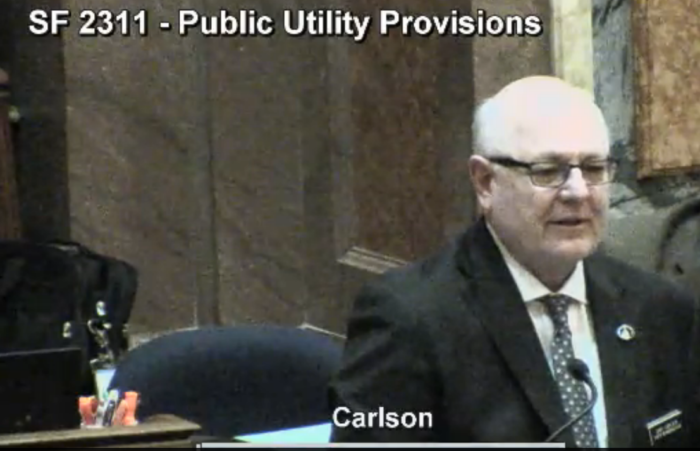 Last night's highly irregular Iowa House proceedings inspired Matt Chapman's latest commentary. The chamber's rules do not normally permit debate past midnight, but Republicans approved an amended version of a terrible energy bill a little past 5 am. A forthcoming Bleeding Heartland post will discuss the substantive changes to the legislation, which goes back to the Iowa Senate. -promoted by desmoinesdem

Senate File 2311, the Aliant Energy/Mid-American omnibus energy bill, was trotted out in the Iowa House after a more than eight-hour caucus after 10:00 pm last night. Much like last year's bill that busted the unions for 180,000 public employees, this cowardly approach of sneaking legislation through while working Iowans are sleeping seems to be on par with the GOP’s values.

Let’s shed some light on their motivations for screwing their constituents. It’s not just a petty, cruel and vindictive thing to do to those who contribute to Iowa’s economy, it’s self-serving. Big energy, Koch brothers and Americans for Prosperity set these corrupt legislators up for life with connections and employment as lobbyists. Who better to continue the cycle of funneling the wealth WE create to those who contribute nothing but misery and struggle for us?

The wealthy donor class have the resources to bribe with a nod and a wink to legislators that continue this cycle. When is the last time you saw a retired GOP lawmaker struggle like the constituents they used to pretend to represent?

But just pay to play isn’t enough. For the scam to continue, a distraction is needed. What better distraction than to incite division among Iowans? Rhetoric and laws that demean and sub-humanize members of our society and pit them against one another with no concern for any violence they incite.

Rhetoric and laws that frame the immigrants who cook, clean and build our societies with the sweat of their brows as gang members and lawless criminals when the statistics disprove this.

Rhetoric and laws that blame the folks on the bottom who struggle just for the basics like food, shelter and health care for the hardships of the middle classes, when the lawmakers and the donor class are to blame.

Rhetoric and laws that inflame the neurotic fear that any sensible gun reform will lead to a purge of all firearms. Then when yet another mass killing of children occurs with a legally purchased firearm, they attack the students that were just on the business end of a weapon?

Drug testing the disabled for benefits. Legalizing machine guns. Taking the reproductive rights away from women. Disenfranchising voters. No recourse for nuisance confinements. Lowering the minimum wage. Busting unions. Rigging the ballots. Nothing to address our polluted waterways. Destroying the mental health infrastructure. Pretending to be addressing the mental health infrastructure they destroyed. Drastically cutting revenue that will benefit the top 5 percent who will get 80 percent of that wealth. Starving school funding. Accelerating rural decline.

Putting their foot on the neck of those on the bottom while giving a big wet kiss to those on the top. That is what the GOP and the Iowa 87th General Assembly will be remembered for. Oh, and the big energy giveaway.

Iowa will no longer be on the cutting edge of energy efficiency and may never be again. It will take a while, but our rates will go up and big energy think tanks will find a way to pin it on the Democrats that, while I am writing this, are doing everything they can to expose the sneak-thieves with this strategy of fly-by-night-I-am-retiring cowardice.

It’s only one in the morning, but we know how this movie ends. I could write a blow by blow, but why? We know the outcome. This giant energy bill will pass, and this weekend backs will be slapped, cigars will be smoked, and expensive scotch will be drunk.

For those legislators who toed the line for their masters, futures will be bright and there will never be a want for anything. The wake behind them will leave hundreds of thousands of Iowans worse off in a hundred thousand ways, so don’t look behind you GOP lawmakers, you may turn to salt.

Never again will an election be taken for granted. It was a tough lesson to learn, and many Iowans will be hurt by the GOP’s actions. Some will die, either from a lack of basic care, or more sophisticated care for those with needs that have been denied in favor of profit.

We don’t put opportunists and sociopaths in charge of our children. The same standard needs to be put in place for legislators. But it’s up to us to vet them. And vet we will in November.