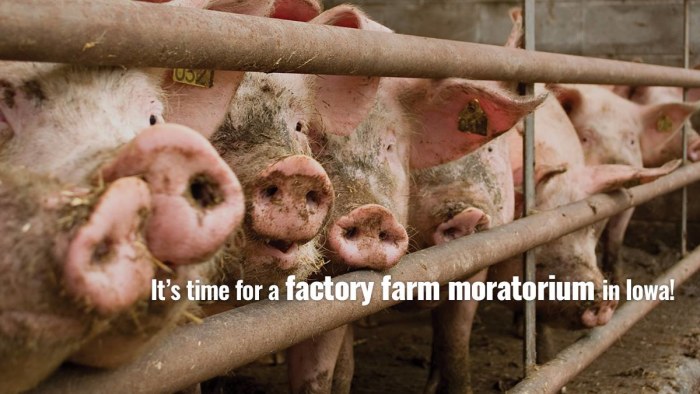 It's time for a moratorium on factory farms

It’s time for a moratorium on factory farms in Iowa. The stakes are high: the future of our rural communities and family farms, the quality of our drinking water, and our democracy hang in the balance.

Profits from small family farms are reinvested in local communities. Profits from factory farms end up on Wall Street.

The independent family farm was once the heart of rural Iowa. Rural communities with more small and medium-sized farms have higher incomes, lower unemployment, and lower income inequality–in short, more shared prosperity–than do communities with factory farms. Profits from a small, family-owned farm are spent in local grocery stores, feed mills, restaurants, and clothing stores. They support and strengthen civic associations–volunteer fire departments, local charities, PTA’s. These businesses and organizations, also owned or run by local people, in turn, invest their profits in the community and provide vital community services. Everyone benefits.

Profits from factory farms end up on Wall Street. Often, the farmer is paid for raising the animals, but the animals belong to a corporate meatpacker–and that corporation pockets the vast majority of the profits. Over the past three decades, the Iowa counties that sold the most hogs and had the largest hog farms had slower growth in median household income and declining numbers of local businesses and retail sales compared to the statewide average.

And Iowa’s small family farms are disappearing fast. It’s get-big-or-get-out: between 1982 and 2012, the number of hog farms in Iowa plunged by 86 percent, while the average number of hogs per farm increased more than 10-fold, from just under 500 to more than 7,000. This get-big-or-get-out scenario and the resulting loss of independent family farms has facilitated a flight from rural parts of our state.

Factory farms are no different than coal barons of Appalachia or the big bank CEOs on Wall St. They drain the wealth from our rural places for the benefit of distant shareholders, who do not reinvest their profits in local communities.

Not a drop to drink…

Our drinking water is increasingly at risk. Nitrates, which have been linked to birth defects and certain cancers, are an ever-present threat. Our largest water utility, the Des Moines Water Works, consistently struggles to treat for high levels of nitrates. At the time of its construction in 1991 for $4.1 million dollars, the utility’s nitrate removal system was the world’s largest facility of its kind. It’s fine to be proud of this technological feat, but the dirty little secret is that manure from the millions of animals confined upstream of Des Moines required the construction of a system like this.

And nearly 200 additional community water systems in Iowa struggle to treat for high levels of nitrates; nitrate levels exceeded federal standards in eleven of our public water supplies in 2015. We pay for this with our tax dollars and our health.

County supervisors should serve as the last line of defense in protecting their residents from the onslaught of factory farms, but the loss of meaningful local control has left their hands tied. The master matrix is nothing more than a rubber stamp, and all but 2 percent of applications have passed it. County supervisors in many of Iowa’s counties, both rural and urban, have had enough. Nearly a quarter of Iowa’s counties have passed resolutions demanding local control or a moratorium on factory farms. State lawmakers should not ignore this growing movement.

Iowa has a factory farm problem, but we also have a democracy problem.

Many of our elected officials line their pockets with contributions from the ag industry, making them no longer accountable to us, their constituents. Agribusiness interests spent lavishly in the 2018 election. The Iowa Farm Bureau essentially bought the secretary of agriculture race. Up and down the ballot, industry endorses and funnels donations to candidates who are willing to do their bidding.

Make no mistake: if our elected officials are bought off by Big Ag, they are no longer working for us, and that’s evident in their refusal to rein in this industry even as it destroys our state.

It’s time for a moratorium.

We can’t wait any longer. A moratorium on factory farms is the only real solution to the crisis facing our rural communities, family farms, drinking water, and our democracy. This crisis worsens with every passing year. It’s time for our elected officials to take bold action to protect us. The general assembly must pass a moratorium on new and expanded factory farms during the 2019 legislative session.