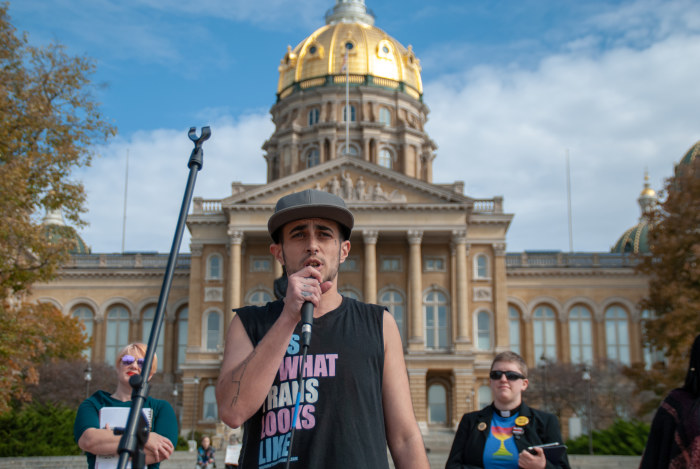 One Iowa Action: “We should not be encouraging half-measures and disparate treatment of our fellow Iowans.” -promoted by Laura Belin

Des Moines Register Opinion Editor Kathie Obradovich’s recent column sets out a laudable goal; protecting both religious liberty and the LGBTQ community (What if Iowa could protect both religious freedom and LGBTQ rights?).

Unfortunately, the substance of the piece misses the mark by pulling from erroneous source material that equates Utah and Iowa, two states with very different legal and political landscapes. In doing so Obradovich implies, perhaps unintentionally, that LGBTQ Iowans need to start from a place of compromise when their rights and freedoms are threatened.

The editorial pulls heavily from Robin Fretwell Wilson’s “Fairness For All” initiative. This misnamed campaign applies strategies used to craft Utah’s nondiscrimination law to other states without considering legal context.

Utah’s law, passed in 2015, extended state antidiscrimination protections to LGBTQ individuals in housing and employment, where there were previously none, with broad religious exemptions that already existed in state law.

In contrast, Iowa already has comprehensive civil rights protections for LGBTQ individuals, and those protections are much more robust than those written into the Utah law. Utah doesn’t even include the crucial public accommodation protections that were recently weakened by Iowa’s Republican legislature.

According to Obradovich, Wilson believes that Iowa lawmakers have never discussed how religious liberty and LGBTQ rights interact because marriage equality was decided by the court. This is blatantly false. When protections based on sexual orientation and gender identity were added to the Iowa Civil Rights Act in 2007, the legislature added several limitations, including broad exemptions for bona fide religious institutions, to protect religious liberty as well. The law passed with bipartisan support after going through the full legislative process. [Editor’s note: Bleeding Heartland covered that law’s passage in detail here.]

Religious liberty is important; it’s one of our nation’s fundamental values. That’s why it’s already protected by the First Amendment to the Constitution.

The legislation that a few extreme Iowa lawmakers continue to introduce year after year creates sweeping religious exemptions that encourage people to pick and choose which laws they’re going to follow. The rule of law is important, and we shouldn’t compromise Iowa laws in order to accommodate those who wish to discriminate against others.

Iowa lawmakers pushing these types of laws aren’t willing to sit down for a discussion based in reality. They’ve made their intentions abundantly clear by bypassing a transparent legislative process to add discriminatory language to the Iowa Civil Rights Act at the last possible moment of session, risking the lives of low-income transgender Iowans on Medicaid. Lawmakers who use these tactics would rather do their dirty work in the shadows and bulldoze over vulnerable Iowans for political points than have a substantive dialogue.

Make no mistake, legislators who want to strip protections from the LGBTQ community are not doing so in the name of compromise. The Iowa Civil Rights Act was a compromise, before discrimination was explicitly written into it this year. Anything stripping civil rights for LGBTQ Iowans will not be a balancing act. It will be a Trojan horse designed to maximize discrimination at the expense of LGBTQ Iowans’ jobs, educational opportunities, and lives. We should not be encouraging half-measures and disparate treatment of our fellow Iowans.

What we should do is demand equal treatment for our transgender community members, coworkers, and friends in the face of blatant attacks on their humanity and safety. A great way you can start is by raising your voice at the Rally for Trans Health Justice this Sunday, June 2 at 1 p.m. on the steps of the Iowa Capitol.

Top image: Codii Lewis speaking at the Trans Rights are Human Rights rally in Des Moines, October 2018. Photo by Keenan Crow, director of policy and advocacy at One Iowa Action, published with permission.