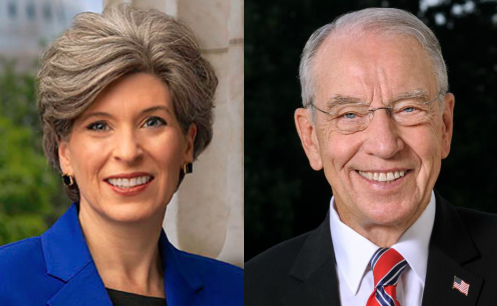 U.S. Senator Joni Ernst told Iowa reporters in October that if articles of impeachment were referred to the Senate, she would "evaluate the facts" as a "jurist."

Senator Chuck Grassley voted to allow deposition of witnesses in President Bill Clinton's impeachment trial, explaining at the time he was supporting "a tightly disciplined legal process to get the information needed to help clear up important discrepancies on the record. Witnesses will not be called simply for the sake of calling witnesses. Seeking this information is important to a process that is judicious."

Yet Iowa's senators joined all of their Republican colleagues on January 21 to prevent senators from examining any documents the White House is withholding and from hearing any witness testimony about President Donald Trump's conduct.

Senator Amy Klobuchar, a former prosecutor, said it well when she observed,

I'm someone that always keeps looking at my colleagues to see if they look guilty. And some of them are kind of looking down. I don't know how they can deny all witnesses. And let's see what they do after a few days of this.

Blocking testimony from witnesses with firsthand knowledge and refusing to release documents under subpoena is almost the textbook definition of obstruction of justice.

Trump boasted to reporters on January 22 that the White House is withholding records relevant to the impeachment charges: "But honestly, we have all the material. They don't have the material."

Back in 1999, Grassley found it so objectionable that Bill Clinton's lawyer helped Monica Lewinsky look for a job that he considered such conduct obstruction of justice, warranting a president's removal from office. Now he is helping the White House make sure senators never examine relevant documents and never hear from Trump administration officials who were directly involved in holding up military aid to Ukraine, seeking a political favor for the president.

If so much weren't at stake, it would be comical to watch Ernst, a vocal advocate for U.S. assistance to Ukraine, make excuses for Trump's actions and shut her eyes to available evidence.

Neither senator has issued a news release explaining their votes against allowing senators to obtain documents or hear from witnesses. I'm seeking comment on whether they are among the 45 Republicans who supposedly are ready to dismiss the charges without further examination. I'll update this post as needed.

According to many Iowans who have contacted the senators' offices urging them to support a fair Senate trial, calls are often going to voice mail, or to a message stating that voice mail is full. Some staffers for Grassley and Ernst are taking down names and comments from those who call about impeachment. A number of Iowans have received form letter replies. Here is an email Ernst's office has sent to many constituents:

Thank you for taking the time to contact me about the impeachment process in the United States House of Representatives. It is important for me to hear from folks in Iowa on matters such as this.

According to Article II of the Constitution, the President, Vice President, and other federal officers shall be removed from office if convicted by the United States Senate of “treason, bribery, or other high crimes and misdemeanors.” As you know, when articles of impeachment are first offered, the House Judiciary Committee has the jurisdiction to decide whether to proceed with the impeachment process. If the Committee agrees to move forward, it will send a resolution stating why impeachment is necessary to the full House of Representatives. The House will then vote on the articles of impeachment and a simple majority vote would be necessary to adopt the articles and impeach the President.

Once impeached by the House, the President’s case then goes before the Senate for a trial where the House trial managers prosecute the case. The Chief Justice of the Supreme Court presides over the trial and the Senate acts as the judge. A two-thirds vote is required in the Senate in order to convict the President and the decision on whether to convict on each of the articles must be made separately.

On September 24, 2019, Speaker Pelosi announced the beginning of a formal impeachment inquiry. Upon completing their investigation, the House Judiciary Committee introduced two articles of impeachment on December 10, 2019 - Abuse of Power and Obstruction of Congress. The House Judiciary Committee voted to advance these articles to the full House of Representatives on December 13, 2019. On December 18, 2019, the House of Representatives approved these two articles. Speaker Pelosi has thus far not sent the approved articles to the Senate for trial.

I will be sure to keep your views in mind should the impeachment process come before the Senate. Feel free to contact my office with any further information, as I always enjoy hearing from Iowans.

UPDATE: A reader provided this example of a form letter Iowans are receiving from Grassley's office. In case the small print is hard to read on screen, some excerpts:

[...] I am taking my constitutional role as a senator and juror seriously.

Article II, Section 4 of the United States Constitution provides that "The president, Vice President and all civil Officers of the United States, shall be removed from office on impeachment for, and Conviction of, Treason, Bribery, or other high Crimes and Misdemeanors." Those are the sole bases for impeachment.

[...] This marks perhaps the most partisan impeachment in the history of the United States of America. In fact, the only bipartisanship the American people witnessed during the [House] vote stood opposed to impeachment. The Framers of the Constitution warned against using impeachment as a partisan weapon. They were rightly concerned that impeachment would be determined by the strength of political parties instead of by real demonstrations of innocence or guilt. [...]

Until the House fully prosecutes its case before the Senate, and the President's team presents its defense, I will withhold final judgment.

As you may know, however, I have many concerns with the way the House Majority conducted its impeachment proceedings. [...]

Whether the House successfully pleads its case before the Senate remains to be seen. The Majority's desire to overturn the 2016 election by impeaching President Trump has been abundantly clear since before he took the oath of office. They've seemingly struggled, however, to arrive at a charge that can stand up to scrutiny. First it was collusion with Russia, but the special counsel spent two years and $35 million investigating, only to debunk the theory. The Majority then focused their efforts on an alleged "quid pro quo," but that didn't poll well with voters. So, they changed their allegation to bribery, but the facts and history didn't seem to support that claim either. The articles ultimately passed by the House reflect that, once again, they had to water down their charge. [...]

To be clear: the Senate, through this impeachment trial, will carry out its constitutional duty with fairness and clear eyes, as opposed to blind partisanship. In the meantime, rest assured that I'll continue my work on the issues that affect the everyday lives of Iowans. 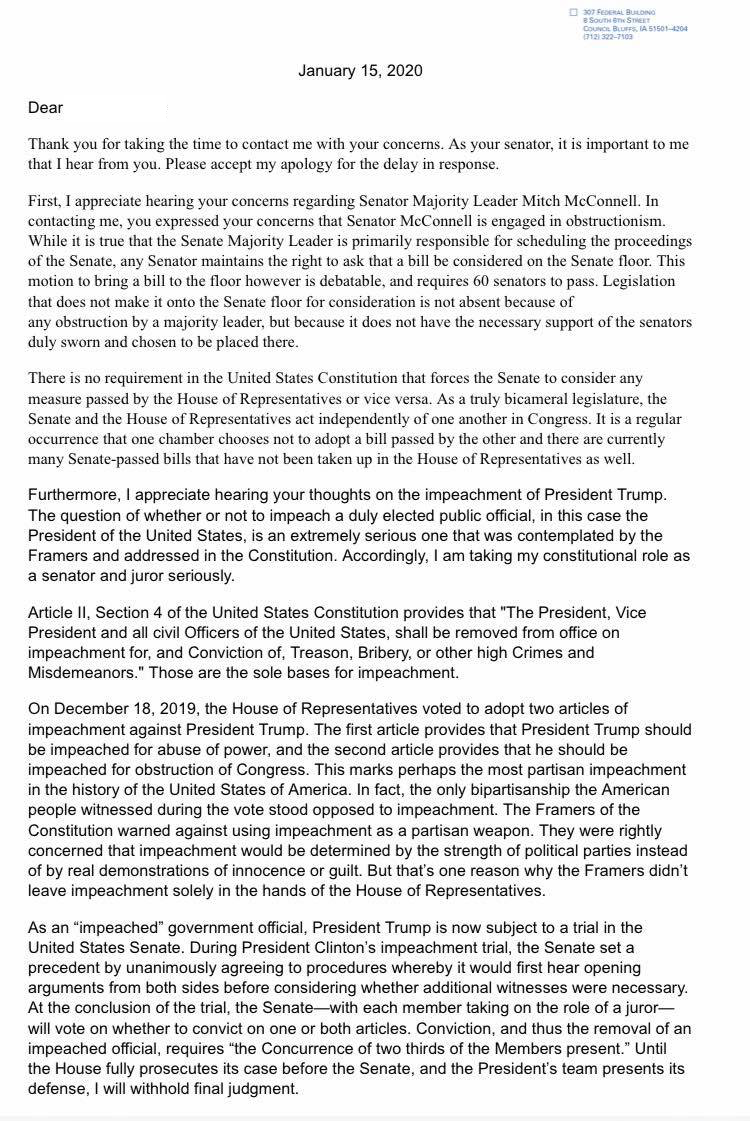 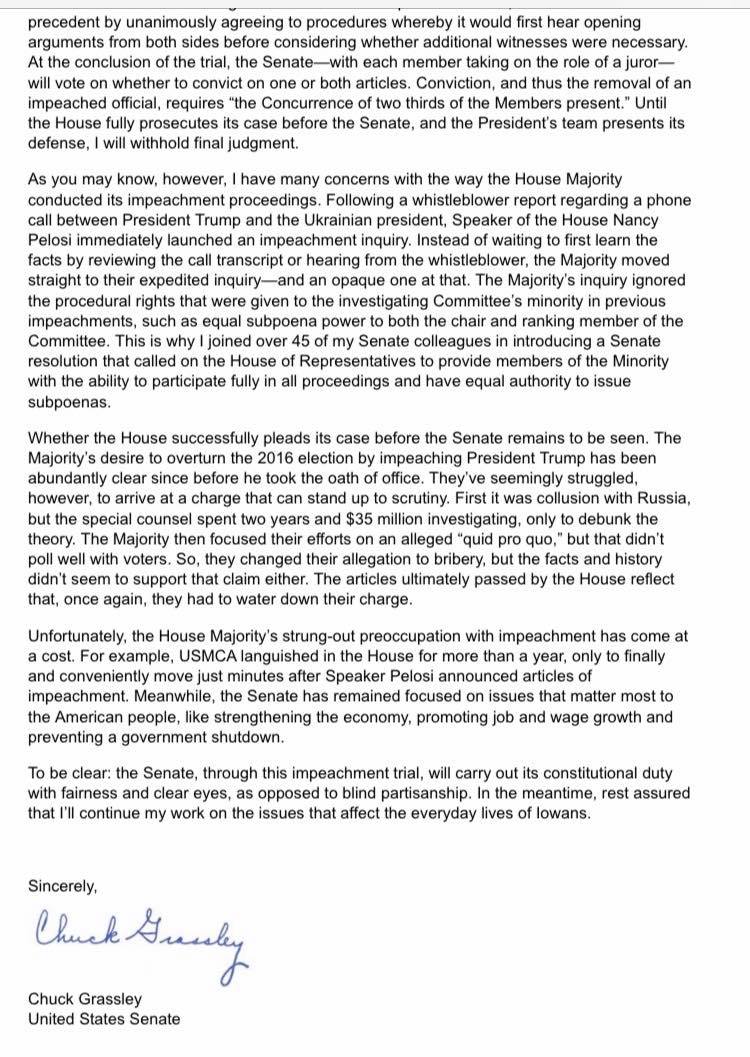 LATER UPDATE: Speaking to reporters on the evening of January 24, Ernst had the chutzpah to mock Democrats:

.@SenJoniErnst from outside the Senate Chamber: "I'm waiting to hear that 'mountain of overwhelming evidence,'... I just can't wait to hear it. Basically... everything we've heard has been over and over and over again."

But I want to go back because it was brought up, of course, again today, the fact that the president held on to funding for approximately two months for lethal aid to Ukraine. And the House managers keep centering on that, they keep going back to that point. But I would remind them that Russia invaded Ukraine in 2014.

Ernst leaned on the same talking point last week in a call with Iowa reporters: by her account, the holdup doesn't matter because Ukraine got the aid eventually. In fact, Ernst portrays Trump's policy toward Ukraine as superior to President Barack Obama's.