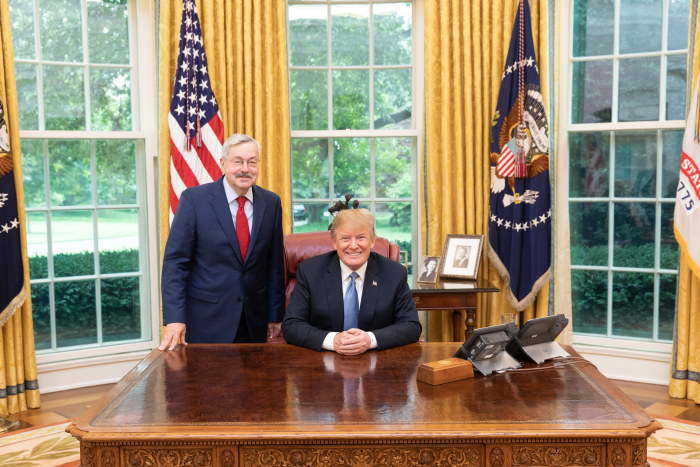 Former Governor Terry Branstad is back in Iowa, having resigned as U.S. ambassador to China in order to campaign for President Donald Trump, Senator Joni Ernst, and other Republicans on the ballot. He's defending Trump's trade policy toward China, despite the impact on Iowa farmers. Speaking with reporters on October 10, Branstad "discounted polls showing President Trump and Joe Biden tied in Iowa."

It's a waste of time to ask any politician about polls, and Branstad has already spoken to the media at length about U.S. foreign policy toward China. Here are four more salient matters Iowa reporters could raise with the former governor.

1. Did Branstad ever see or hear Trump try to secure the Chinese government's assistance with his re-election? If so, when and where?

During a one-on-one meeting at the June 2019 Group of 20 summit in Japan, [President] Xi [Jinping] complained to Trump about China critics in the United States. But Bolton writes in a book scheduled to be released next week that “Trump immediately assumed Xi meant the Democrats. Trump said approvingly that there was great hostility among the Democrats.

“He then, stunningly, turned the conversation to the coming U.S. presidential election, alluding to China’s economic capability to affect the ongoing campaigns, pleading with Xi to ensure he’d win,” Bolton writes. “He stressed the importance of farmers, and increased Chinese purchases of soybeans and wheat in the electoral outcome. I would print Trump’s exact words but the government’s prepublication review process has decided otherwise.”

Bolton doesn't mention Branstad in The Room Where It Happened, but the ambassador may have attended meetings or listened to phone calls involving the president and Chinese officials.

2. Was Branstad ever briefed on attempts by Trump to enlist the Chinese government in boosting his re-election campaign?

"I just thought this kind of back and forth with authoritarian leaders did not reflect well on Donald Trump himself or the presidency or the United States," Bolton told NPR Morning Edition host Steve Inskeep on Sunday evening for an interview to be broadcast Monday.

Whether or not Branstad witnessed efforts to solicit campaign assistance, he should have been in the loop on transcripts or summaries of Trump's conversations with Xi.

3. When speaking with Chinese officials about trade policy or other matters, did Branstad ever discuss the possible impact on Trump's election prospects?

It's worth getting the ambassador on the record about this, because if Trump loses in November, more insiders are likely to spill details about his conduct of foreign affairs.

4. How often did Branstad help his son Eric make connections in China?

Mara Hvistendahl and Lee Fang published a lengthy examination of Eric Branstad's dealings in The Intercept on October 15. Eric Branstad joined the lobbying group Mercury Public Affairs in 2018, and in June of that year, he and former Trump campaign adviser Bryan Lanza "traveled to Beijing for meetings with Chinese government groups, including a chamber of commerce established by the Chinese Communist Party’s influential United Front Work Department that has ties to large Chinese companies." Soon after, the U.S. Commerce Department lifted its ban on the Chinese company ZTE buying American-made telecom equipment parts.

Documents show that Eric Branstad did not register as an agent for ZTE, despite the timing of Mercury’s contract with the Chinese firm and his decision to accompany the ZTE lobbying representative while in China. His meetings with Chinese government groups were revealed only in posts published in Chinese by his hosts.

If Eric Branstad had contacted his former colleagues at Commerce about ZTE, it would have violated an ethics pledge he signed when he joined the department in 2017. The pledge barred him from lobbying the agency for five years after leaving his job there.

In an interview with The Intercept, Eric Branstad said he has not lobbied the Commerce Department in any way for any client, and added that since joining Mercury, he has met with former administration colleagues only on a personal basis: “If I do anything, it’s with old friends for birthdays and stuff like that. We don’t talk about business.” His meetings in China with Lanza included no “business or policy discussions,” he said, noting that the trip was motivated only by a desire to “culturally connect and show good feelings.”

“I didn’t even know about [ZTE] until it was over,” Branstad said. “I was not part of that account. I chose specifically to stay out of everything China because there would be a natural conflict with my dad being there.” [...]

Eric Branstad’s and Lanza’s hosts in Beijing noted in the accounts published on their websites that the two lobbyists discussed issues that veered close to the ZTE denial order, including Trump administration policy toward China and the nascent trade war.

Hvistendahl and Fang published other evidence from Eric Branstad's emails and calendars during his time at the Commerce Department, early in the Trump administration.

In at least one instance, a lobbyist who approached Eric Branstad about China claimed to have been sent by the elder Branstad. “Tesla folks were visiting your dad in China concerning the Chinese tax on US made vehicles among other issues,” wrote Ashley Davis, an outside lobbyist to Tesla, in an August 2017 email to Eric Branstad. “Your dad thought we should touch base with you here in DC as well. (I am sure you love when he does that!),” she added.

Iowa's former governor owes us an explanation of any way he helped his son form relationships, either as a federal government employee or as a lobbyist. All the more so since Trump and his allies have accused Democratic presidential nominee Joe Biden of pulling strings for his son Hunter Biden.

P.S.--Speaking at Trump's super-spreader rally in Des Moines on October 14, Terry Branstad asserted that the Council of State Governments had issued a report saying Iowa was "the state that has done the best of all 50" in dealing with challenges related to the novel coronavirus. "That is a tribute to the leadership of Kim Reynolds and a Republican-controlled legislature," Branstad declared.

He was referring to this report from July. The authors weren't talking about how well states had controlled the spread of COVID-19 or the management skills of governors. Rather, the Council of State Governments and the accounting firm KPMG LLP "examined near-term budget impacts, the economic risk of ongoing pandemic effects and shutdowns, the resiliency of states to respond and strategies for fiscal recovery."

Iowa has fared better than most states in terms of budget shortfalls, but that was largely related to the structure of our economy. States heavily dependent on natural resources or tourism saw "catastrophic" revenue declines. In contrast, Iowa and Delaware benefited from "industry-specific mitigation factors, [...] with relatively high concentration of state GDP in the finance and insurance sector and a low concentration in the leisure and hospitality sector."

UPDATE: Caleb McCullough reported for the Daily Iowan on a GOP campaign event in Solon. Without disputing any fact published by The Intercept, the Branstads portrayed the thoroughly-researched article as false.

“I want to make it clear that I would in no way benefit or profit, or any member of my family, from the dealings in China,” Terry Branstad said at a press event in Solon, Iowa. [...]

Eric Branstad, who accompanied his father to the event in Solon, said the article was a left-wing attack and an attempt to influence the election.

“The accusations from the left-wing blog are completely unfounded and purely laughable,” he told reporters.

Terry Branstad denied claims that his son had used his influence for business dealings in China, and he said he has taken steps to ensure transparency during his time as ambassador. He said he sold shares in John Deere and Hormel Foods — who both have operations in China — before starting as ambassador to avoid the image that he was profiting off the position. [...]

“My son has done nothing to profit from China, unlike the situation with Hunter Biden,” Terry Branstad said on Tuesday. “I guess what really bothers me about politics today is that people make these crazy accusations.”