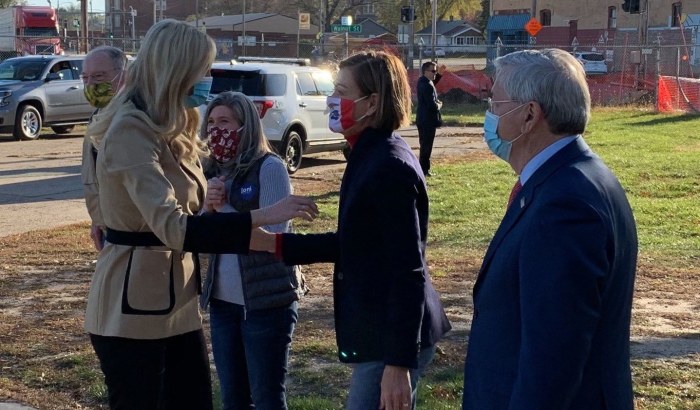 We’ve had Broadway musicals inspired by American history, such as 1776 and Hamilton.

Now how about an Iowa take on the nation’s future with a political song and dance called Iowa’s Un-Strung Quartet? The musical would deal with U.S. Senators Chuck Grassley and Joni Ernst and Governors Terry Branstad and Kim Reynolds in their attempts to harmonize with the persistently off-key Donald Trump.

The dark humor driving the discord would be the fact that Trump does not demand loyalty from his aides and his supporters.

Trump does not want loyalty; in fact he punished people for being loyal and suggesting he do the right thing. What Trump demands is unquestioning obedience. “Shut up and do what I say.”

Loyalty, on the other hand, has connotations of friendship, letting a person know when you disagree with him or her, when a person for one’s own good should correct course and get in step with what is best for others, what solves problems instead of exacerbating them; what sows agreement instead of rancor.

The past four years Grassley, Ernst, Branstad, and Reynolds have been decidedly obedient, far from being loyal.

Our musical might unfold after the 2020 election, when the Iowa quartet, individually or collectively must decide whether to be obedient to the Cult of Trump or loyal to the office of the president and the nation.

Talk about the need for a change in tune to end cultic obedience.

For Reynolds that would mean abandoning the Trump script she persistently follows in dealing with COVID-19, contributing to the hospitalizations and deaths of lord knows how many Iowans — but certainly a share of the thousands of deaths the epidemiologists say have resulted from how Trump ignored the epidemic from the outset. He capped that approach with a joy-ride around the Walter Reed Hospital, when he was treated for the virus, so much as thumbing his nose at the efforts of those who took the pandemic seriously and those who died.

My name is Reynolds; please call me Kim

I can call The White House on a whim.

That’s how I deal with the pandemic.

Always get my orders double quick.

Gee, there’s joy in being obedient

Do what’s right? That’s not expedient!

Grassley was as obedient as he could be as chair of the U.S Senate Judiciary Committee delaying and fussing for two years on nominations by President Barack Obama and then greasing the wheels for just about any Trump nominee. In emails, Grassley justified refusals to speak out against Trump by saying that going public in disputes with Trump would take away time and emphasis for looking out for Iowa interests — as though Iowans had nothing at stake in what a president is doing. His verse might be:

You Iowans well know me as Chuck.

Dealing with Trump one may have to duck.

Huh? You want to uphold the rule of law?

Sometimes you just have to be lenient.

Hey, it’s lawful to be obedient!

Ernst linked her 2020 re-election campaign to her obedience to Trump. She did virtually nothing to fulfill her 2014 campaign promise to “make ‘em squeal” in Washington by getting government priorities in order. Nor did she speak out about problems that her obedience to the president only made worse.

Even now know the price of soy beans!

Re-elected, you know what that means.

I’m well-schooled in being obedient

Hearing or contriving a call for assistance, Branstad left his ambassador post in China in time to join in the Ernst/Trump campaigns. His attacks on Democrat Joe Biden and the so-called “death tax” punishing Iowa family farms ranged from questionable to downright false. So he is singing:

If conscience stirs from up above,

Or if Trump again goes off the rails

I have a response that never fails!

I want you to know I’m meaning it.

My escape hatch? Just be obedient.

Perhaps the musical could have a Greek chorus to advocate loyalty, invoking memories from the days when Iowa had a Republican Party and not a Cult of Trump. You know: Bob Ray, Jim Leach, Mary Louise Smith, Joy Corning, Dorothy Carpenter, Herbert Hoover, Robert D. Fulton, Julia Gentleman, and many others for whom obedience was not the default option.