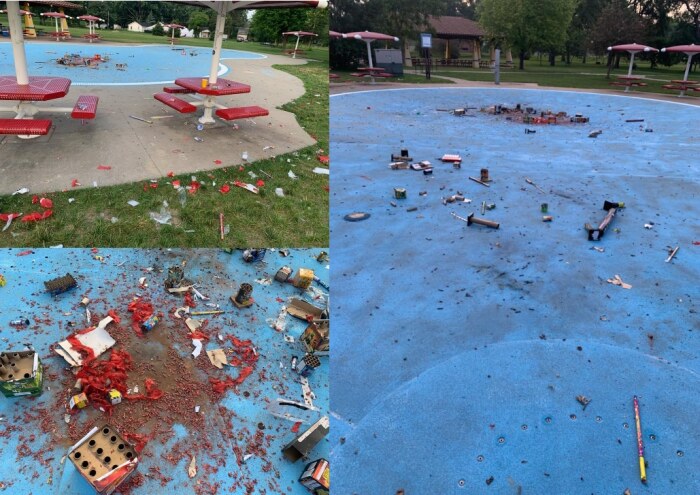 The Fourth of July: Then and now

Herb Strentz: While our founders pledged their lives, their fortunes, and their sacred honor in the interests of a new nation, many current political leaders would gag on the notion of pledging anything without considering its effects on their re-election or campaign contributions.

Consider the opening and closing passages of the Declaration of Independence.

The 1,321-word document begins with timeless words: “We hold these truths to be self-evident, that all men are created equal, that they are endowed by their Creator with certain unalienable rights, that among these are life, liberty, and the pursuit of happiness.”

And the 56 signers put their lives on the line at the end: “And for the support of this declaration… we mutually pledge to each other our lives, our fortunes, and our sacred honor.”

Those “truths” and that “pledge” are why 245 years later, we rally around the flag and shoot off fireworks.

The photos accompanying this post — taken by the Des Moines Parks and Recreation Department of fireworks litter at a park on the city's south side — are troubling, almost a metaphor for how far we have strayed from the Declaration’s promise.

While our founders pledged their lives, their fortunes, and their sacred honor in the interests of a new nation, many current political leaders would gag on the notion of pledging anything without considering its effects on their re-election or campaign contributions.

Consider a paramount foe, China, now celebrating the 100th anniversary of its Communist Party with optimism about its progress. Meanwhile The Economist magazine observes, “a crisis of confidence grips much of the democratic world.” The Economist reports, Chinese “officials delight in comparing their autocracy with what they portray as Western disarray. They like to point at America, mocking it as a hellhole of covid-19 deaths, racist policing, gun violence and partisan paralysis.”

While the rhetoric from our friends is not as harsh, there is friendly concern about the issues underlying China’s condemnation. Under the headline “The Rest of the World is Worried About America,” New York Times columnist Ezra Klein wrote about how foreign scholars on democracy view our current politics.

I’ve been asking foreign scholars of democracy how the fights over the American political system look to them. These conversations have been, for the most part, grim.

“I’m positive that American democracy is not what Americans think it is,” David Altman, a political scientist in Chile, told me. “There is a cognitive dissonance between what American citizens believe their institutions are and what they actually are.”

There’s nothing new in differences between what elected officials, citizens, or religious faithful aspire to and how they behave. But in the 2021 context of Trump and January 6 — the insurrection date now etched in our national psyche like December 7, September 11, and July 4 — the contrasts are more troubling.

Bill Moyers, a former journalist, press secretary, and adviser to President Lyndon Johnson and a fixture for decades on the Public Broadcasting Service, had these issues in mind in the 1989 PBS documentary, The Truth About Lies. He surveyed a worrisome conglomeration of government deception in the 1960s, ‘70s and ‘80s— including the Bay of Pigs invasion, the war in Vietnam, Watergate, the reckless decision making that led to the explosion of the Space Shuttle Challenger and the deaths of seven astronauts.

At the start of the 1989 program, he said, “America often refuses to face the painful truth about itself. Why is this so? And can a nation die of too many lies?”

Those comments — quite similar to what the Chilean scholar told Ezra Klein — were more of a warning.

Now we might think of it as an alarm bell. The question “Can our nation die of too many lies?” has become “Will it?”

Moyers ended the program with a good answer: “We seem to prefer the comfortable lie to the uncomfortable truth. And we punish those who point out reality while rewarding those who provide us with the comfort of illusion. Reality is fearsome, but […] experience tells us more fearsome yet is evading it.”