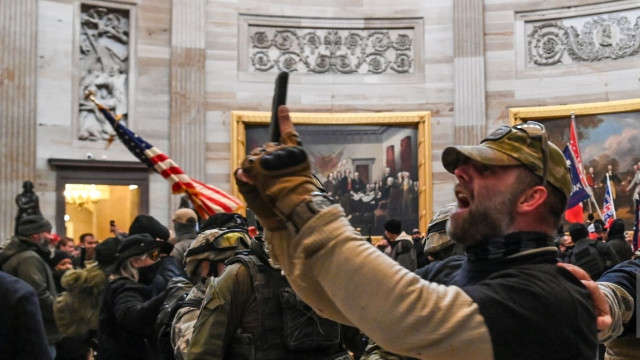 Herb Strentz: The real story is not whether Chuck Grassley will seek re-election, but his refusal to denounce Trump’s Big Lie about the 2020 election. -promoted by Laura Belin

A chronic condition of the press is a tendency to focus on the sideshow instead of the main attraction—to report “what’s going on” without acknowledging “what is really going on.”

That critique comes to mind in reflecting on recent media coverage and commentary regarding U.S. Senator Chuck Grassley.

To read and view the news, the major issue regarding Grassley is whether he will seek an eighth term in the 2022 election. To me, that’s the sideshow. The center ring is Grassley’s refusal to rebuke fellow Republicans whose Gospel is Donald Trump’s lie that the 2020 election was stolen from him.

Forget about the side show, folks. Consider this headline from Vanity Fair magazine, “Trump all but dares his supporters to attack the U.S. Caplitol again,” and this reporting:

“What happened that day from your standpoint?” Fox Business anchor Maria Bartiromo asked Trump, who responded by saying that the “Stop the Steal” rally that preceded the insurrection had been called by “patriots” who were merely demonstrating “spirit and faith and love.” Claiming there were “over a million people there,” he added, “They were there for one reason: the rigged election. They felt the election was rigged. That’s why they were there, and they were peaceful people. These were great people. The crowd was unbelievable, and I mention the word love—the love in the air, I’ve never seen anything like it. And that’s why they went to Washington.”

The article by Bess Levin concludes, “With Trump dubbing their actions at the Capitol noble and good, it’s not hard to see a scenario in which his most rabid fans—like the ones who believe he is the true president— undertake another violent insurrection.”

That mentality and approach continues to be the rallying cry of the Republican Party—even though the “stolen election” cry is routinely characterized as “The Big Lie” and has been refuted time and time again by the courts, election officials across the nation, and even by U.S. House Minority Leader Kevin McCarthy.

Despite the pilgrimages he makes to Mar-a-Lago and Bedminster in homage to Trump, McCarthy said in May, “I don’t think anybody is questioning the legitimacy of the presidential election. I think that is all over with. We’re sitting here with the president today. So from that point of view, I don’t think that’s a problem.”

McCarthy’s assessment that nobody “is questioning the legitimacy” of the 2020 election is mind-boggling, given that the guy he visits in Florida continues to claim the election was “rigged,” and he won “in a landslide.”

But after all, we all have our delusions. One of mine is that perhaps a respected leader of the GOP, like someone who is the longest currently serving U.S. senator, could have spoken out in November or since against the insurrection mentality, recognizing that the peaceful transfer of power is the bedrock of democracy.

Continuing my delusion, I’ve sent dozens of emails to the guy I had in mind, criticizing him for not speaking out and urging him to do so.

I often included a quote attributed to David Hume (1711-1776), the Scottish philosopher of the Age of Enlightenment: “All That is Necessary for the Triumph of Evil is That Good Men Do Nothing.”

Grassley’s responses never acknowledged the Hume quote, but his reply of May 18 was typical, justifying what he’s been doing (or not doing):

I was elected to be a legislator, not and media pundit. I do not think that the appropriate way to respond to intemperate language from certain elected officials is with more heated political rhetoric …Since election day, I have urged Americans to have faith in our constitutional system and let it work its course, which it has…

In fact, much of the conversation about the election, January 6, and former President Trump more generally has been heavily influenced by the prevalence of deeply rooted political bubbles in media and online that create an artificial impression that our country is divided into two camps with no middle ground…

I never hesitated to express my disagreements with former President Trump when I thought I could make a positive contribution to the discussion.

Grassley’s response may seem reasonable upon the first reading, but not upon the second or third. No one said he was elected to be a “media pundit.” No one said the appropriate way to respond was with “more heated political record.” And, good night! Is the insurrection of January 6 letting “our constitutional system work its course”?

All Grassley was asked to do, basically, is what he still refuses to do — to say that Biden’s election was legitimate and to say, dare we hope, that Trump has no credentials to do much of anything (except answer anticipated subpoenas alleging criminal behavior).

In another email, Grassley sought to document his “disagreements” with Trump by providing a list of links to statements and news releases about those disagreements.

I surfed through the list long enough to justify responding to Grassley that I could find no reference to any disagreement with Trump. So I wrote I must be missing something and could one of his aides flag some of the disagreements he had referred to. Never heard back on that one.

But he does not have anything more pressing than to heed what David Hume warned about when it came to “the triumph of evil.”

Top image: FBI photo of a suspect from the January 6 attack on the U.S. Capitol.