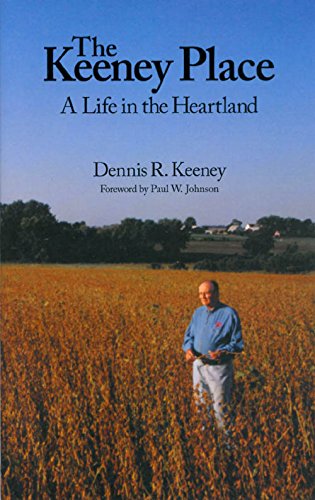 A story of hope and the Leopold Center's first leader

Paul W. Johnson passed away in February 2021. His family and Dennis Keeney gave permission to share the text of the forward he wrote for Keeney's 2015 book The Keeney Place: Life in the Heartland.

In 1862 President Abraham Lincoln signed into law the Morrill Act. It offered states 30,000 acres of land for each of their Senators and Representatives. The land was to be sold and its proceeds used to establish colleges in each state to provide higher education for the “industrial classes.” These institutions became known as “land-grant colleges,” and today every state in the Union has at least one land-grant university. In 1887 the Hatch Act added research, and in 1914 the Smith-Lever Act added an extension component. Today, land-grant universities, with their education, extension, and research components can be credited with one of the most revolutionary changes in the status of humanity that our world has ever witnessed.

What does this have to do with The Keeney Place: A Life in the Heartland? Everything.

Dennis Keeney starts his book by writing about his childhood on an Iowa farm, a mid-twentieth century product of the land-grant idea. And what a childhood. Any of us who grew up in rural America at that time can’t help but reminisce as we read his words. Dennis writes about Grandpa on his new-fangled tractor hollering “whoa” as the tractor raced out of control down the slope into the farm pond. Change came lickety-split, often faster than many of our grand parents could handle. Overall it was a good era. I sometimes mourn the loss of those experiences, which formed a whole generation of Americans.

In Keeney’s second section he becomes the raw material for which the land-grants were created. He, and his future partner, Betty, enrolled at Iowa State College, the first land-grant, established in 1862. Dennis describes for us a life-changing experience, an introduction to the noble pursuit of advancing the science of food production, and land stewardship. His education was liberal and liberating. What an exciting time. The human condition was improving, and agriculture was at the center of it.

Dennis continued in the land-grant tradition and tells of his notable career in agricultural research, education, and extension at the University of Wisconsin. But it was also a time when many, both in and out of the academy, began to question the direction of our drive for progress. Early on in this era, Dennis Keeney became aware of this uncertainty. Were the land-grants unable to accept criticism? Had they lost their way? Were they unduly influenced by profit over principle? Rachel Carson made it clear in her book Silent Spring that not all agricultural science was noble science. The land-grants fought her tooth and nail. Dennis tells us of his efforts to question where agricultural science was taking us.

After his land-grant education and research career, Dennis tells of his return to Iowa to lead the newly established Leopold Center for Sustainable Agriculture at Iowa State University. Needless to say, when I learned of the Keeney appointment I was pleased. I was a farmer-legislator in Iowa at that time and helped develop the Leopold Center as a part of the 1987 Groundwater Protection Act. We had serious concerns about locating it at Iowa State. Iowa was still in the middle of the farm crisis of the 1980s, and land-grant universities were rapidly losing their luster.

In the end, we decided to place it at Iowa State with the hope that the Leopold Center would give faculty and students an alternative to the industrial agriculture approach. Chuck Benbrook, the Executive Director of the National Academy of Sciences Board on Agriculture at the time, called the Leopold Center “the land-grant university’s last hope.”

No person was better equipped to develop the Leopold Center than Dennis Keeney. He was not an outsider. He was a respected researcher. But more important, he was a product of the land-grant idea and was deeply concerned about its loss of tradition and its apparent inability to develop a renewed vision of service.

All is not well today, but partly as a result of Dennis Keeney’s efforts there is hope. Sustainable agriculture programs are developing throughout the country, many by non-governmental institutions. At many land-grant universities, faculty and students are questioning the thinking that bigger industrial agriculture is better agriculture. However, many university administrators have yielded to pressure from their industrial partners and thus far have resisted the Leopold Center concept.

Dennis Keeney’s willingness to question blind profit-driven approaches to agricultural biotechnology, biofuels, and large animal confinement systems should be admired in education and research circles. Unfortunately, land-grant universities often feel threatened by those who would question corporate-driven research. The response of agriculture to criticism always seems to begin with denial (antibiotic resistance hasn’t been caused by overuse in animal feeds, or hypoxia in the Gulf of Mexico isn’t caused by farming practices in the farm belt). Then the response moves to scare tactics about starvation (the green revolution’s dependence on overuse of fertilizers, pesticides, and new, patented seed varieties have saved millions from death). Yet, I still believe that when they set their minds to it, our land-grant universities are capable of developing appropriate alternatives.

The Keeney Place: A Life in the Heartland is a wonderful story of how a farm boy from Iowa, formed by a great idea, can give us a better world. Think of how much better it could be if we’d all pause, reflect on this good life, and recommit to the idea envisioned in the 1862 Morrill Act: a world open to liberal education, good objective science, and a commitment to service, and respect for this wonderful world we live in.