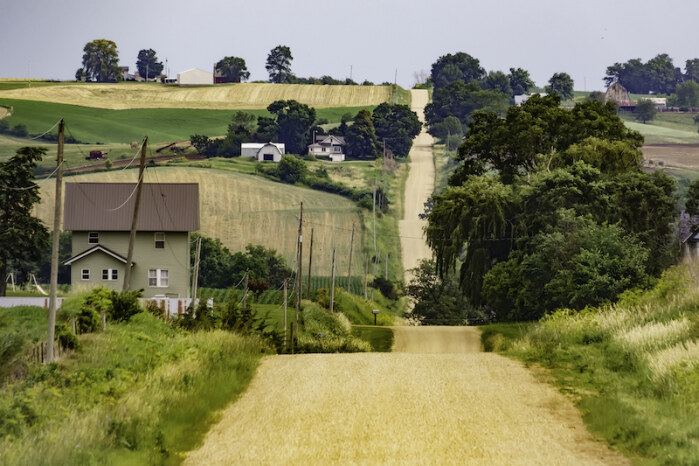 Rural Iowa and an approach to political dialogue

Broadly generalizing, rural Iowans are good folk. They work hard and play by the rules, care about their neighbors, and seek to leave a future where their children can succeed and prosper. If an African American family moves in next door, they welcome them with fresh-based bread or cookies. They regard a child with Down syndrome reaching the age of majority as a part of the community and look out to see that youth is supported by and included in community life. They are entrepreneurs and tinker to be good stewards in preserving the land and community, in the context of a corporate agricultural economy.

Those qualities may not distinguish them greatly from city folk, but rural Iowans frequently have much more sense of and hands-on involvement in community life.

They also are older, whiter, and less likely to have college degrees than their urban counterparts. In 2008 and 2012, nearly half of Iowans outside large metro areas voted for Barack Obama for president. But a third of those who had voted for Obama switched away from the Democratic candidate for president in 2016. Donald Trump received about two-thirds of the rural Iowa vote in 2020.

Democrats have been wringing their hands over this shift – and the change in the county coffee shop conversations that must have occurred in small-town and rural Iowa.

As a city (actually college town) folk, I have an “IN THIS FAMILY” yard-sign that proclaims support for Black Lives Matter, women’s rights as human rights, inclusion, and the environment. It is a message and statement that, in my mind, goes beyond partisanship and speaks to values that truly are part of the American fabric. While politically I vote Democratic, the values that make me do so are not partisan but universal.

If I were living in a rural community, however, I would not display this sign. When I visit rural communities, I see MAGA and TRUMP signs predominating.

These good folk believe their values – hard work and playing by the rules, helping their neighbors as a part of civic life – are under attack and in jeopardy. They don’t see the personal responsibility they have exhibited and espouse as being valued by larger society. They don't see opportunities for their children to succeed and prosper by following in their paths.

If their votes are to again change, we Democrats need to recognize the frustration rural Iowans have felt with the political system in failing to value and support them. We need to start dialogues on some common ground.

I don’t think the dominant news media and information sources – FOX News and conservative talk radio – serves rural people well. An alternative needs to be presented, with a different starting point. Talk radio plays up our support to “defund the police,” “indoctrinate critical race theory into our kids at school,” and engage in “cancel culture” with those with whom we disagree. However much we believe that ours is the perspective being vilified and canceled, debating such points is probabl not the way to start a discussion.

If I lived in a rural community, I would display a yard sign that says, “WE SHARE COMMON GROUND” and speaks to values that include personal responsibility, neighborliness, and playing by fair rules. Something along these lines: 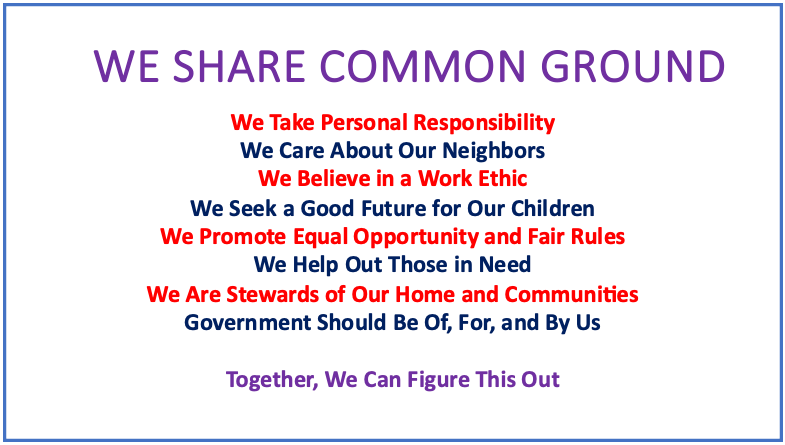 That might be a way to start dialogues rural Iowans would like to have. We would benefit from having those conversations.

On a policy front, we could begin by talking about the Infrastructure Investment and Jobs Act legislation, which President Joe Biden just signed into federal law, and its impact on rural Iowa.

In a written statement, U.S. Secretary of Agriculture Tom Vilsack described the bill this way:

This is a transformative investment for rural America. In closing the digital divide and delivering 21st century broadband, farmers will have access to real-time information and new technologies needed to maintain their competitive edge, small businesses will be able to develop their markets, and rural communities can become better connected to jobs, telemedicine, and distance learning.

As we repair crumbling roads and bridges and make investments in our ports, waterways, and rail transit, we will connect agriculture and rural communities to more markets and more economic opportunity. Upgraded power infrastructure, environmental remediation, and clean and safe drinking water will power and revitalize communities historically left behind.

As we invest in green infrastructure, we will respond to the climate crisis by increasing community resiliency and conducting critical work on our farms and in our forests to mitigate wildfires, support farmers and ranchers grappling with drought, and improve watersheds and water supply.

This is a tremendous opportunity to build up rural America with wealth that stays in rural communities, jobs you can raise a middle-class family on, and the ability to compete around the world. Now, let’s get to work and see to it that the benefits of modern infrastructure reach every corner of our country.

In public presentations, Vilsack further stresses that while the legislation is transformative and agencies are committed to its effective implementation, that is not enough. A key to its enduring impact rests with leaders in rural America educating their colleagues and communities about it and about the importance of government taking such a supportive role in sustaining rural communities as vital for American prosperity. Vilsack sees that dialogue as essential to advancing good government, good policy, and good politics.

Government can do good, and if government doesn’t, in many instances there is no real antidote to its shortcomings. Government should be of, for, and by us. That starts at the local level with inclusive dialogues and reflection of who we are and where we want to go. It is a matter of encouraging that dialogue and working with good folk – rural and urban – to figure it out.

Charles Bruner is a longtime advocate for policies that support children and strengthen families.