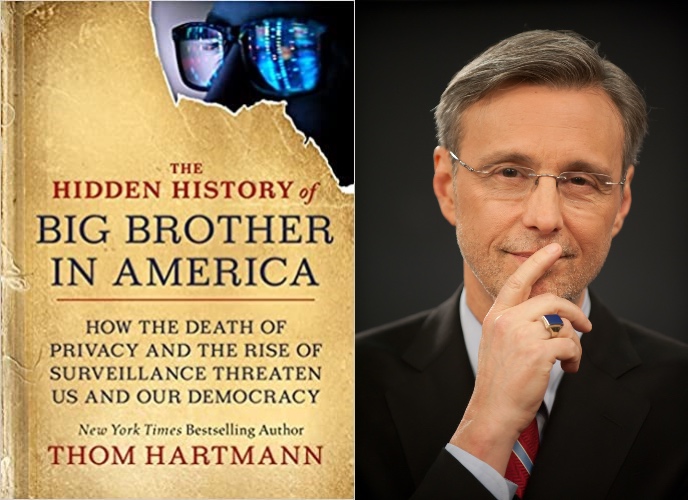 Book Review: The Hidden History of Big Brother in America

Paul Deaton is a lifelong Democrat living in Johnson County whose first political work was for the Lyndon Johnson presidential campaign.

In The Hidden History of Big Brother in America: How the Death of Privacy and the Rise of Surveillance Threaten Us and Our Democracy, author Thom Hartmann focuses on Big Data and its consequences for all aspects of our lives. In the framework of surveillance and social control, Hartmann traces the history of surveillance and the threat of violence to control behavior, thought, and belief by our political and social masters.

Referencing George Orwell's book 1984, Hartmann wrote, "Orwell was only slightly off the mark. Big Brother types of government, and Thought Police types of social control, are now widespread in the world and incompatible with democracy."

What makes this book timely is the way Donald Trump's campaigns used Facebook and Cambridge Analytica to scrape personal data about tens of millions of voters from the internet, and then custom target them with tens of thousands of distinct daily ads designed to either persuade people to vote for Trump or not vote at all.

On the day of the third presidential debate in October 2020, Hartmann wrote, team Trump ran 175,000 variations of ads micro-targeting voters. These ads were, for the most part, not publicly seen.

Here in Iowa the Republican legislature seeks to control our behavior with legislation intended to address perceived constituent needs. Iowa Republicans approach it with a dull knife. For example, because of feedback and paranoia about transgender girls, Republicans introduced legislation to ban trans females from Title IX activities. This legislation would create discrimination for sure, and potentially a bullying environment for children. They seek to control our behavior and even such crude attempts at social control are anti-democratic.

By using bludgeoning methods, Iowa Republicans were not nearly as effective as Trump's use of Big Data to spy on voters and use what they found to influence their decisions.

Whether one is liberal, conservative, libertarian or whatever, we have concerns about how Big Data firms like Google, Facebook, Oracle, Microsoft, Amazon, and others surveil and use data we consider to be private. In the beginning we considered such data collection and use to be for advertising like generating sales for a brand of energy drink. Whether it is conservatives who have paranoid feelings that "Big Data" is collecting personal information, censoring and manipulating people, liberals who see companies like Cambridge Analytica violating their privacy, or Amazon Ring customers concerned about law enforcement gaining warrantless access to video from the camera at their doorstep, Big Brother is watching us, eroding our privacy, and threatening our democracy.

In The Hidden History of Big Brother in America, Hartmann uses extensive examples to highlight the consequences of Big Data on our lives. He traces the history of surveillance and social control, looking back to how Big Brother invented whiteness to keep order, and how surveillance began to be employed as a way to modify behavior. "The goal of those who violate privacy and use surveillance is almost always social control and behavior modification," Hartmann wrote.

Big Data threatens privacy and enables surveillance, Hartmann wrote. The lack of alternatives to lifestyles that involve feeding into Big Data leads to almost forced participation in surveillance by Big Brother. Surveillance and lack of privacy are a threat to freedom, he wrote, because the information gathered can be abused, people have a right not to be observed, and being observed is an intervention that can affect those who are observed.

Are we doomed to live under Big Brother's watchful eye? How much social and political control should corporations have in society? How much Big Brother will modern people tolerate? For discussion of answers to these timely questions and more, I recommend the Hidden History of Big Brother in America.

Thom Hartmann is a four-time winner of the Project Censored Award, a New York Times bestselling author of thirty-two books, and America's #1 progressive talk radio show host. His show is syndicated on local for-profit and nonprofit stations and broadcasts nationwide and worldwide. It is also simulcast on television in nearly 60 million US and Canadian homes.

To buy a copy of the Hidden History of Big Brother in America: How the Death of Privacy and the Rise of Surveillance Threaten Us and Our Democracy, click here. The book is available March 8, 2022.