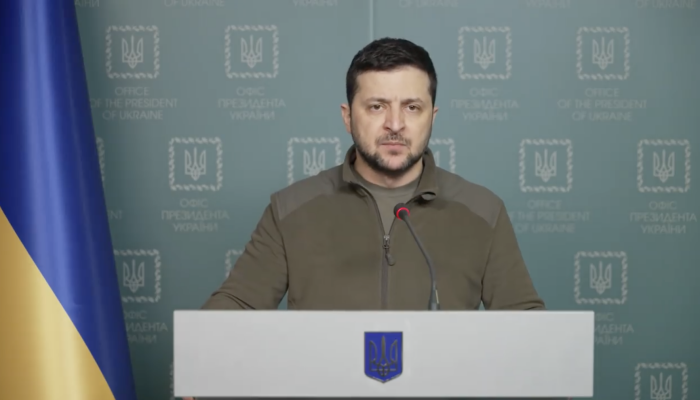 Volodymyr Zelenskyy has no future in the GOP

I predict that Republicans will begin to turn on Ukrainian President Volodymyr Zelenskyy this week, certainly before the end of the month.

It’s been nearly three weeks since Russian President Vladimir Putin invaded Ukraine, so the attention span of the average American is already being stretched. That makes it the ideal time for the puppet masters of the GOP, aided by rant radio hosts, to direct the attention of their followers to “new information” which will turn them against Zelenskyy.

His religious affiliation will play a major part in this change, though most of them will keep it subtle in order to avoid the obvious Nazi comparisons—especially given that Zelenskyy’s own family was decimated by the Nazis in WWII. But when the “new information” starts to “come out,” look for the telltale signs: “elites” (Look who’s supporting this man!), “international bankers” (Look how the financial system is being used to help him!), and the ever-evil media (Look who owns the papers!).

It will be more than just anti-Semitism, of course, because Zelenskyy and his fellow Ukrainians are the underdogs in this fight, and Americans love an underdog. Turning right-wing voters against a man who talks like a European John Wayne, and has shown himself to be in real life the courageous person that John Wayne only pretended to be, won’t happen overnight.

But as has been proven time and again: say something nasty often enough, and loud enough, and some people will start to believe it. Frame those nasty things as flashes of insight that reveal the real powers in the world to those who are ready to believe, and you have a reliable formula to take down the man who at the beginning of the invasion succeeded in making his nation’s cause the world’s cause.

Some of this will be a lateral attack, and that is already well under way. As an example, the GOP insistence that higher fuel prices are entirely the fault of President Joe Biden required nanoseconds to take hold. It was easy to plant that seed, since Biden is also blamed for the higher inflation of the past year. (Never mind that the rest of the world has the same issues.) The focus on fuel prices is easy because the vast majority of Americans drive a vehicle, and also because businesses are quick to put fuel surcharges in place, so that consumers can’t miss the immediate impact.

All this anger at “astronomical” fuel prices directed at Biden and the Democrats will soon leak out into resentment at Zelenskyy, whose success in rallying the world to his cause will be cast as the reason for higher prices, and evidence that the shadowy “they” are out to weaken America’s economy.

Attacks against renewable fuels (except ethanol) will be another path of this drive to turn Zelenskyy from hero to villain. It’s unlikely that the campaign will go so far as to cast the oil companies as victims or heroes, but that doesn’t stop wind, solar, and any other form of non-fossil fuel from being excoriated as a part of that same campaign by “them” (see above paragraph) to harm and control Americans.

Please don’t ask me to explain the logic; there is no logic. But that doesn’t mean people aren’t already making the argument. It goes in hand-in-hand with the reason why the GOP will turn on Zelenskyy: they abhor “tree huggers” and “environmentalists” and “libs,” all of whom in their minds are connected with renewable energy, ergo renewable energy must be somehow part of the plot against “real” Americans. To the extent that a correlation between Zelenskyy and policies favoring renewable energy can be drawn, it will be used to blacken Zelenskyy’s reputation.

If you don’t believe in the notion of a loyal opposition—and the GOP certainly does not—it is impossible to believe that the other side can disagree with you and not be traitors. And that is exactly where today’s GOP is at. There are some, few and far between, who have dared suggest that perhaps not everyone who isn’t a Republican is not a traitor. But for the most part, outrageous statements like those from members of Congress who call for violence against their political opponents, and lead cheering crowds in chants calling for death to Democrats, are ignored by prominent Republicans. And in that refusal to say such actions are remarkable and unacceptable, they become unremarked and normalized.

As Democratic support for Zelenskyy and Ukraine remains strong, it will be but a small step for the GOP to make the case that anyone so loved by traitors cannot possibly be a person that Republicans should continue to support.

It will all be made easier by the messianic undertone that has always infected American politics. We love to build up heroes. We are drawn to politicians who, whether by self-description or as the repository of our collective hope, hold promise to be our savior. Our love for a hero is outpaced only by our love for seeing heroes taken down.

Years ago, in another lifetime, I taught Western Civilization at a local college. When we were talking about the role of women in Victorian society, we would discuss the notion that women were to be put on a pedestal. Many of the students thought it sounded like a pretty good deal for the women: to be seen as arbiters of taste, morals, virtue, to be protected, to hold a privileged place in Victorian middle- and upper-class society. I used to stand on a chair to demonstrate what it was like to be put on a pedestal, and how a very small misstep would send a person crashing to the ground.

We, western civilization of the 21st century, have put Zelenskyy on a pedestal. A few well-timed pushes will easily dislodge him in the eyes of the GOP base, who will have been primed to believe that he was a false messiah controlled by, and catering to, the interests of the liberal elites.

The war in Ukraine is nineteen days old. The groundwork is already being laid for Republicans to turn today’s hero into tomorrow’s villain.

Editor's note from Laura Belin: Mother Jones reporter David Corn obtained a Putin administration memo telling Russian media outlets, "It is essential to use as much as possible fragments of broadcasts of the popular Fox News host Tucker Carlson." The popular prime-time host has promoted Kremlin-friendly narratives and conspiracy theories about the war in Ukraine.