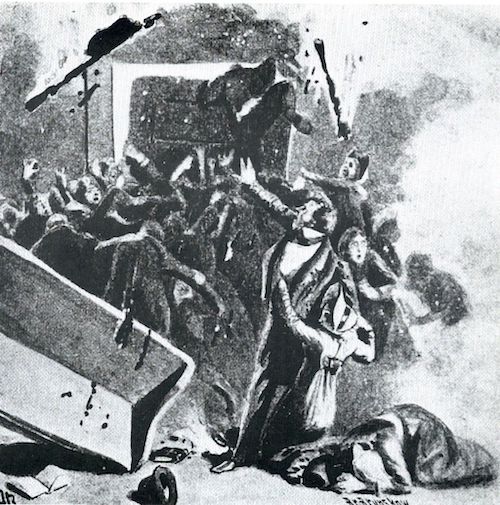 I’m primarily of Nordic ancestry, somewhere between 62 and 83 percent. Let’s say, approximately three-quarters. Despite my Germanic name, my family tree is rooted in Norway, as is my wife Paula’s. Mindful of this heritage, Paula and I traveled to Norway with my parents in 1998, to visit locations from which our ancestors departed almost 150 years earlier to begin their new lives in the U.S.

One community we sought out was Grue, population 5,000. As we entered town, in the best Norwegian tradition, we made for a local coffee shop. The waitress asked if our visit was linked to the Grue Church fire.

Not really. But wait, what Grue church fire? (Clearly, we had not done our homework.) No, we were there mostly to gaze upon tombstones of distant relatives. But tell us a bit about this fire...

The fire happened on May 26, 1822. I'm citing it in part to note the upcoming bicentennial of this tragedy.

Here’s the story. Pentecost, a holy day, when “tongues of fire” came to rest on believers (Acts 2: 1-4), was being celebrated at Sunday worship at the Grue Lutheran Church. The service was to include baptisms, undoubtedly boosting attendance, estimated to be from 500 to 600 people.

The church was constructed entirely of wood, the oldest part dating from the 13th century and built in the traditional stave style characteristic of many Norwegian churches. A major construction project around 1600 had enlarged the building and the building exterior was covered with pine tar to waterproof it. Over the two previous centuries, an estimated seventeen tons of tar had been applied.

As the vicar was concluding his sermon, flames erupted and quickly enveloped the building. All major doors to exit the church opened inward. Panic broke out as the crowd attempting to escape effectively blocked the doors from opening.

The Grue Church fire is the deadliest fire in Norway's history. At least 113 people were killed, including 69 women and 36 children, perhaps some relatives, I don’t know. The church was completely destroyed. The fire’s cause was never determined. One consequence was passage of a law requiring all doors of public buildings in Norway to swing outward.

Let me conclude by using these church doors as a metaphor. There are plenty of people, companies, and organizations—even churches—whose doors should open out into the broader world. Such work requires a serious, ongoing commitment to outreach and a conscious effort to engage with the greater community.

As society re-emerges from an extended post-pandemic withdrawal, shouldn’t our doors once again swing outward in welcome and appreciation, in hospitality and sharing?

More than 5 million refugees have fled Ukraine as of April 20, which reminds me of another era, one that began almost five decades ago. Between 1975 and 1980, 10,000 refugees primarily from Vietnam, Laos, and Cambodia came to Iowa, thanks in large measure to then Iowa Governor Bob Ray and his exemplary leadership.

As Kenneth Quinn noted in a Des Moines Register column,

Ray made Iowa a global moral leader in rescuing suffering and dying people, and in so doing, he forever earned a place in the pantheon of Iowa’s greatest humanitarian heroes. [...]

He was the first governing leader anywhere in the world to step forward to accept the “boat people” refugees from Vietnam who were drowning and dying at sea. [...]

U.S. refugee policy allowed individual families to remain intact, but no group resettlement was allowed. The Tai Dam feared they would be scattered across the country, with their culture and  language lost and family relationships broken apart. Desperate, they addressed a letter to each of the 50 U.S. governors imploring them to accept all of the Tai Dam as a people. Only one governor replied: Robert D. Ray.

Unless we’re Native Americans, Iowans are all like me: of immigrant stock. Maybe it’s time for us to exercise our deep humanitarian instincts once again, to ensure that our doors open outward, and that we collectively welcome new displaced families into our midst.

I realize it would be neither easy nor simple, but we could do this, couldn’t we? Couldn’t we?