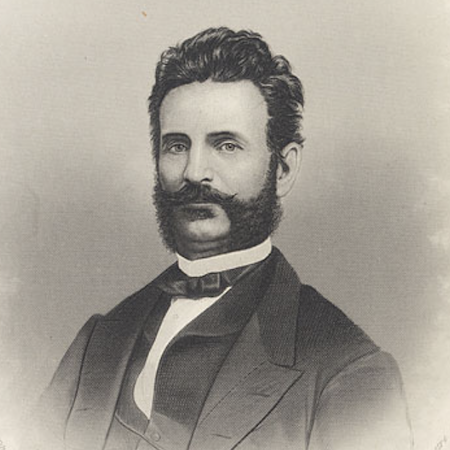 Editor's note: the following account was originally published in The Annals of Iowa as a single paragraph.

A young colored boy, Jim White, belonged to Dr. [Samuel] Merry, who then lived on a farm about thirteen miles up the river. When Dr. Merry moved from St. Louis to Iowa he left this boy [age unknown] with his daughter, Mrs. Hughes, at St. Louis. Jim was hired on a steamboat on the lower Mississippi and was to have his freedom in two years. But he got into a fracas with the steward of the boat and got his head badly hurt, so he was sent North to Dr. Merry for treatment.

He soon became so impudent that the doctor ordered him off the farm. Jim concluded he did not like country life and simply…left ‘Massa Merry’ and came to town and commenced working at the hotel for Mr. James Borland, the proprietor at this time.

The Merry family concluded that if Jim did not want to stay with the doctor he had better go to St. Louis, where he could be [hired out]. Accordingly an officer from St. Louis was sent after Jim. He found him at the hotel and attempted to arrest him without judge or jury.

Perhaps he would have succeeded if the proprietor, Mr. Borland, had not interfered. He disarmed the detective of his pistols by main force. In the mean time the boy took shelter with Mr. Clark, who had the St. Louis man arrested for kidnapping.

One of our old citizens who is still residing here, Mr. Fred Phelps, went his security. The Merry family had the boy arrested according to law by one of our officers. He was arraigned before D.C. Cloud, then a justice of the peace, with Stephen Whicher and R.P. Lowe for the prosecution and Jacob Butler, W.G. Woodward and J.S. Richman for the defense.

The trial was held and the boy released on the ground that Dr. Merry had brought, or permitted the boy to come within the bounds of a free State, and which act freed the boy from all liability to be returned. This was before the noted Dred Scott decision.

The boy was not safe, as the leading southern sympathizers were determined to take him without law. While the excitement was still high, an old fellow named Michael Greene went to Uncle Ben Mathews and Aunt Nellie, his mother, and said he was going to Chicago with a team and that he would take the boy with him.

This was reported to Mr. Clark, who now had the boy snugly stowed away in his garret. It was arranged that Greene was to cross the river before night and go out to the third bridge and wait for the boy, who was to cross in a skiff as soon as it was dark. Mr. Clark, although not so old as he is now, was too smart to be gulled by such an old villain as Greene, he having known something of his previous record.

Clark started as it was dark in company with the boy and two other persons to cross the river in a skiff. When out on the river so far as not to be noticed from the shore, they quietly let the skiff float down the river. They soon heard three different boats crossing above them. They quietly went home and went to bed. The parties in the other three boats spent the night in the bottom on the other side of the river looking through the woods after Jim, whom Mr. Clark had stowed away for the night.

In the morning Greene returned without going to Chicago. After waiting two or three days the St. Louis man concluded he could not get Jim by stealth, so he went to Dubuque to obtain a warrant from a United States Judge for his arrest. It was generally understood that U.S. Courts were intensely pro-slavery at this time and that Jim would stand a poor chance there. This pleased the pro-slavery side immensely, so much so they could not keep it secret.

When the man got back from Dubuque, which occupied three or four days, Jim was arrested a second time. A writ of habeas corpus was obtained from Hon. S.C. Hastings, then acting Chief Justice of the Supreme Court of this state, who released him. Jim stayed around Bloomington, and joined the colored Methodist Church. [The Annals of Iowa, 1882. State Historical Society of Iowa.]

This drama likely occurred at the American House, a property owned by Borland that is now the Roy J. Carver Charitable Trust.

Hastings founded a San Francisco law school which bore his name until it got changed in 2021. Bloomington was renamed Muscatine in 1849.