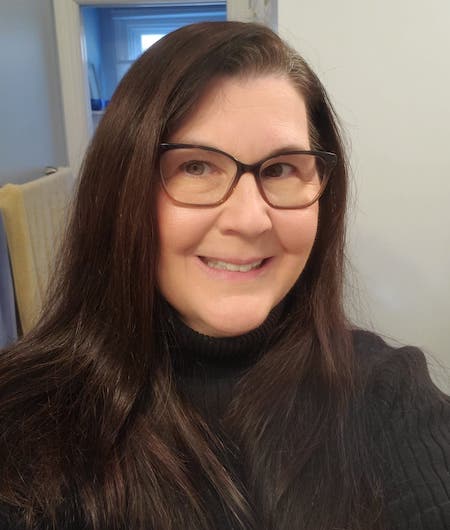 Marie Gleason of Bettendorf is a John Deere retiree and a former candidate for the Iowa legislature. She is passionate about women’s issues, civil rights, and public education.

A parent in the Pleasant Valley School District (Scott County) requested to have All Boys Aren’t Blue, a multiple award-winning book by George M. Johnson, removed from the high school’s library.

It had been seventeen years since anyone asked this school district to ban a book.

The district formed a special committee chaired by an administrator, which also included one school board member, a school librarian, a teacher, two members of the public who are in the Parent-Teacher Association, and two high school students.

Committee members read the book prior to the April 29 meeting, which was so well-attended that the district had to set up an overflow room.

The chair structured the meeting in a transparent way. After opening comments by the chair, a public comment period gave the complainant ten minutes to speak. Any resident of the Pleasant Valley School District could speak for three minutes each. The high school librarian had ten minutes to give concluding remarks. The committee would take a short break and deliberate in open session before voting.

I noticed an interesting gender dynamic: everyone who spoke in support of the book ban was a white male.

As if trying to ban a book weren't bad enough, Peter Olsen of Bettendorf threatened the committee with a comment along the lines of, “I know who you are, and I know where you live." After a break between the public comment portion and when deliberations were to start, the chair shared that some had viewed the comment as threatening. Olsen was given an opportunity to clarify his remark.

He used the time to grandstand and talk about his military experience, which also came across as threatening. He refused to yield the floor, which also felt threatening, until the crowd would have no more of it. Because of the disruption, the chair decided to change from open deliberations to closed session.

Fortunately, the committee voted 6-1 to take no action—that is, not to remove the book from the library.

Superintendent Brian Strusz accepted the special committee's vote. Pleasant Valley's process gives complainants five days to appeal such a decision to the school board. In this case, the complainant decided not to appeal.

Note: No further requests to remove All Boys Aren't Blue will be considered for a year. But Pleasant Valley may be asked to ban other books, and the next person who tries may be willing to pursue the matter through the appeal process. Following a school board vote, complainants can take their request to the Iowa Department of Education.

RECOMMENDATIONS FOR DEFEATING A BOOK BAN

Here's what I learned from the recent episode in Pleasant Valley.

1. There's strength in numbers. Spread the word through your networks, and be prepared to show up on short notice. I found out about this meeting through word of mouth.

2. If you plan to speak at a public meeting, prepare your comments in advance and keep them focused.

3. Find out whatever you can about opponents and their strategies. For instance, many advocates for removing All Boys Aren't Blue asserted that they were not asking for a "book ban."

A speaker who favored keeping the book in the library then read the definition of a book ban. But even after hearing the definition, the other side continued to deny a book ban was on the table.

4. Appeasement does not work, so push back on threats and bullies. (Having a critical mass of like-minded people at any public meeting helps.)

5. Research your school district's policy on dealing with threats. If there isn’t a policy, recommend that administrators and the school board develop one.

Top photo of Marie Gleason provided by the author and published with permission.