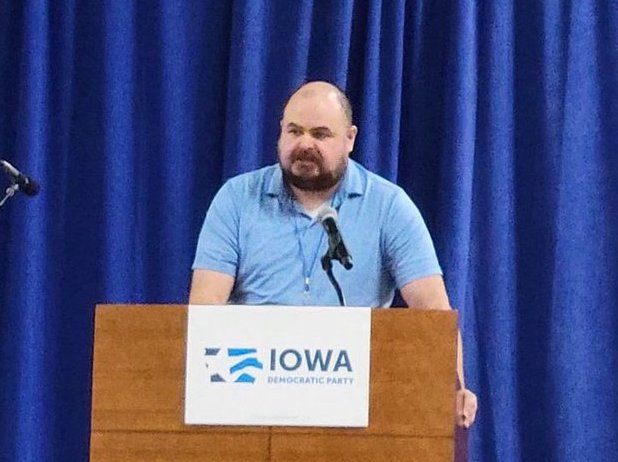 A call for solidarity with Iowa's LGBTQ+ community

Here is the speech I delivered at the Iowa Democratic Party's state convention on June 18. (You can listen to the audio here.)

"My brother posted a reflection on his life journey on Facebook yesterday, that was really compelling to me, so I wanted to focus on this today. He is 26, one of my best friends, and he’s trans.

"He started by noting his experience when he first came out. He said, 'My family and friends never looked at me differently, and they gave me the best support system any gay teenager could ask for.'

"I remember when he was growing up, because in a lot of ways, I helped raise him. I’m eleven years older, and there was no father figure in the house. So, I stepped into fill that void.

"I remember very vividly, when we were at the park, playing games, watching movies, how on an almost daily basis there would be that moment where his attention would wane, and it was clear that he was thinking about something heavy, and he was frought with worry. That’s why I’m so glad now that he’s at peace and he knows how much he’s loved.

"However, he closed his reflection yesterday on a somber note. He said, 'Don’t be an ally only during Pride month, because there are a lot of people who don’t have the support I had, who need love and acceptance from strangers.'

"Now’s a scary time for members of our LGBTQ+ community. In the last month, ministers in Texas and Idaho have publicly called for executions. A militia of dozens was arrested on their way to attack a Pride parade.

"Some thought leaders and politicians on the right are trying to mainstream the 'groomer' slur, associating members of and advocates for the LGBTQ+ community with pedophilia, a particularly dangerous turn that I myself am seeing on my social media almost daily now.

"And our own governor is using our kids, the LGBTQ+ community as pawns in her culture war, while vilifying the parents and the teachers that are doing everything they can to support them.

"There are a lot of people in the community that don’t have brothers, sisters, or parents to lean on. And there's no way we can ever replace that void completely. But we can certainly fight the good fight for them every day. Not just when it’s Pride month, but every single day. Not just with our words, but with our votes, our policy decisions, and our complete commitment, without hesitation, to take public stances proclaiming our unwavering advocacy and support.

"There was a recent Associated Press article that cited a fear that some in the LGBTQ+ community have, that us Democrats may not have the resolve to put forth the fight needed to push back against such a big new wave of hate that's coming their way.

"I pledge to fight that good fight, and I ask you all to join me in doing the same.

"We need to look to leaders like my fourth district’s own C.J. Peterson, who I had the honor to vote for as [Iowa Democratic Party] Stonewall [Caucus] chair this morning. His fearless spirit is what we need more of, as he’s a tenacious fighter for the people, regardless of the odds.

"I pledge to join him in fighting that good fight every day during my campaign and after in the fourth district, without fear.

"We as Democrats need to truly love our LGBTQ+ friends and family more than the hate that many throw their way every day. Thank you."

Top photo of Ryan Melton speaking at the Iowa Democratic Party's state convention on June 18 provided by the author and published with permission.