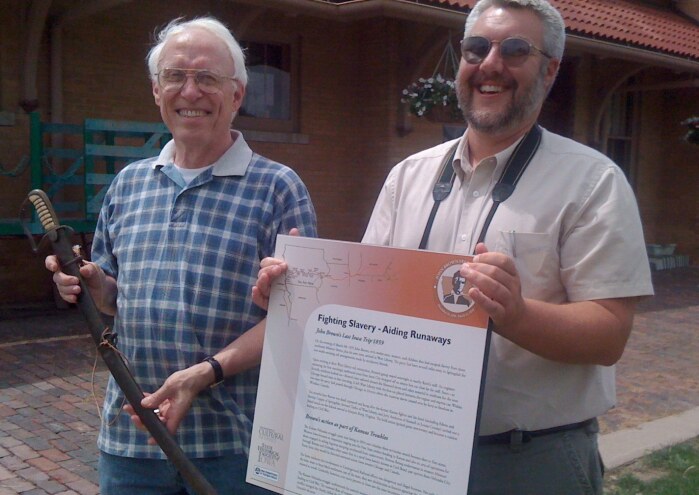 Sixteen historical markers across Iowa tell the story of John Brown’s last “underground railroad” trip—February 4 to March 10, 1859—from Civil Bend near the Missouri River to the Mississippi’s edge at Davenport.

The marker I know best stands outside the historic West Liberty railway depot. Its post is well cemented into ballast rock. I know, having dug much of the hole myself in June 2009. I say it’s my most “concrete” contribution to the Iowa Freedom Trail, of which the John Brown Freedom Trail is a subset.

Lowell Soike conceived and led the overall project for the State Historical Society of Iowa. Early on, he and his team concluded that whatever buildings or structures might once have been identified as having significant association with the illegal, clandestine activities of Iowa’s “Underground Railroad” simply no longer existed. Instead, the state historical society team would focus on collecting documents and stories, along with doing some archaeology. They would get acquainted with the likely actors. They would map and chart and analyze family and business connections, settlement patterns, religious and fraternal associations, political activities, and so forth.

Because of our Alexander Clark research, Lowell introduced several of us Muscatine people to Doug Jones and John Zeller and others doing the Underground Railroad legwork. We joined the quest and shared in their adventures for several years.

Eventually becoming the team leader, Doug was first an archaeologist. One of my favorite times with him was an exploration with ground-penetrating radar which he led at a cemetery near the Cedar County farm where Brown’s men trained in 1858.

We sifted old newspapers for Muscatine clues. Who might have “done stuff,” Doug always said, and what did they do?

Fellow volunteer Steve Hanken and I created the Facebook group “Underground Railroad (West)” where folks around the region are still sharing stories and theories and event notices.

As the state historical society funding ran out and staffing ended, Lowell gathered the project’s findings into the pair of books I consider among the best sources for students of the topic.

In the first volume, he presents one of the best recitations of Muscatine’s 1848 Jim White story and many others. He describes every stop of the Brown party’s 1859 trek—the stories behind those markers. And he separates fact from legend. From Necessary Courage: Iowa’s Underground Railroad in the Struggle against Slavery. University of Iowa Press 2013:

Contrary to popular myths about the underground railroad, in Iowa fugitives were not hidden in caves or tunnels. Most records show that the people who aided runaways commonly hid them in nearby brush or timber, tall grass, a cornfield, or an adjacent outbuilding—a crib, a hay shed, or the occasional small barn. There are only a few examples of runaways being hidden in some spare space of a house, such as an attic or cellar. The tales of quilts containing secret codes for the journey to freedom are likewise apocryphal; all the accounts of the underground railroad in the Midwest indicate that runaways made use only of spoken directions or traveled with the people assisting them on their northward flight.

Fugitive slaves’ prospects for a safe journey across Iowa depended heavily on their own ingenuity, on people who spontaneously befriended them along the way, and on the direct, planned help of antislavery residents who were more committed to a "higher law" than to the law of the land. … In short, the underground railroad was but a rickety, impromptu network of people offering general assistance.

From escapes along the Missouri border “…the routes branched either toward the Quaker settlements in Henry County (such as Salem) or northeast toward Washington County and then on to Burlington or Muscatine, where fugitives and their allies would cross the Mississippi River on their way to Chicago.”

Soike’s second volume tells “the rest of the story” on Brown and much more, with less on eastern Iowa and much on Iowa’s part in the “Bleeding Kansas” war that hardened John Brown and led to nationwide civil war.

From Busy in the Cause: Iowa, the Free-State Struggle in the West, and the Prelude to the Civil War. University of Nebraska Press 2014: “Neither Missouri nor Iowa were solid in their proslavery or antislavery outlook, but the slavery issue in Kansas moved its neighbors toward one side or the other, stiffening southern identity in Missouri and strengthening northern proclivities of Iowa.”

We volunteers labored on, busy in our cause.

For a while, Muscatine activists shifted focus from seeking National Historic Landmark recognition of Clark’s house to getting it listed on the National Underground Railroad Network to Freedom. The National Park Service advised going that route as a step toward our historic landmark goal. Working with Dé Johnson (Network to Freedom Midwest Regional Manager) and Doug Jones at the state historical society, we assembled documentation and made considerable effort in that direction.

Top image: Lowell Soike and Doug Jones at the installation of the John Brown Freedom Trail marker at the West Liberty depot in June 2009. Soike holds a sword Brown is said to have given to a local man.