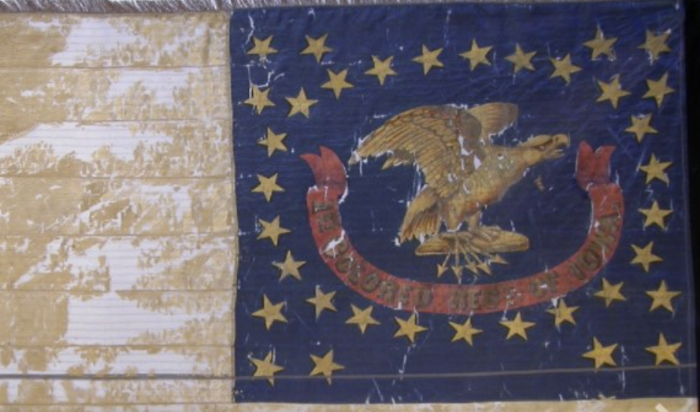 Worthy to be trusted with the musket

In the Muscatine Journal archive can be found several reports of Civil War service by a regiment of “colored” soldiers. Next time I will examine their role in making post-war Iowa the place Ulysses S. Grant would call the “bright radical star.”

January 16, 1863: “THE AFRICAN REGIMENTS.—Some of the African regiments, upon the organization of which the President has determined, will be employed to guard the banks of the Mississippi after it shall have been opened by our fleets and armies.”

August 31, 1863: “ENLISTED.—Alex. Clark, a well known and respectable colored citizen of this place, has enlisted in Capt. Gehon’s company, (1st Iowa African Regiment). Aleck. possesses ample property to keep himself and family in comfortable circumstances, but deems it his duty to go into the service of his country on the first opportunity afforded. As colored men cannot hold commissions in the army, he goes, of course, into the ranks. His patriotic example has been followed by several other colored citizens of this place. Aleck. requests us to say that he will shut up his barber shop, and he that also desires to close up all unsettled accounts before he leaves.”

September 5, 1863: “NEGRO RECRUITS.—Fifteen recruits for the African Regiment, from Iowa City, went down on the packet yesterday for Keokuk. Lieut. Gehon leaves today with ten more from this city. Lieut. Brady will remain a short time longer to receive any more who may wish to enlist. His office is at Clark’s barber shop, under the Ogilvie House.”

September 10, 1863: “GOOD APPOINTMENT.—Alex. Clark, of this place, has received the appointment of Sergeant Major of the 1st Iowa African Regiment. This regiment has already some 300 men in the rendezvous at Keokuk. The appointment of Clark is one eminently fit to be made. He possesses all the requisite energy and business talent for the position, and is earnestly and sincerely devoted to the cause of putting down the rebellion. He has authority to receive recruits for the regiment, and will start to-day on a tour through the Northern part of the State for that purpose. Letters for him may be sent to this place, which will continue to be his headquarters for some time.”

October 5, 1863: “Alex. Clark passed down on the Kate Cassel, Saturday evening, for Keokuk, with forty recruits for the colored regiment, which he obtained at St. Paul and Fort Snelling.”

November 26, 1863: “FLAG PRESENTATION.—The 1st Iowa African regiment was made the recipient of a beautiful ensign, the gift of ladies of Keokuk and Muscatine, last Friday, at Benton Barracks, St. Louis. The presentation was made by Alexander Clark, of this city. Lieut. Col. Collins received the flag on behalf of the regiment, and responded in an appropriate manner.”

March 22, 1864: “The 1st Iowa African regiment is still at Helena, Arkansas, scouting and doing guard duty.— The regiment has been highly complimented for soldierly qualities and deportment, in official reports, and ranks very high in the esteem of military men. The following extract, from a letter to Alex. Clark, will give some interesting details concerning the regiment: ‘Five companies of our regiment are manning five of the six forts at this place. One company is down on Island 66, about 40 miles below here, guarding wood choppers and picking up stray guerrillas. The rest of the regiment is doing very heavy duty in the way of [guarding], hauling wood, fatigue duty and scouting. … Our regiment has been very sickly, but the average health is much better now. We have lost some of our very best men by disease. The weather is delightful, and the sick list in consequence much smaller.’”

August 12, 1864: “The 60th U.S. infantry (composed in part of what was formerly known as the 1st Iowa African) was engaged in a desperate fight near Helena, Ark., on the 27th ult. They lost sixty killed and wounded, and were forced to retire by vastly superior numbers. … Neither side showed quarter, no prisoners being taken.”

October 24, 1865: “THE AFRICAN REGIMENT TO BE DISCHARGED.—The Desmoines [sic] Register says a dispatch from Little Rock to the Executive Office states that the 60th U.S. Infantry (colored), numbering 688 enlisted men and 23 officers, has been placed en route for Davenport for final payment and discharge.”

November 6, 1865: “Resolved, That we, the soldiers of the 60th U.S. Infantry, formerly the Iowa First, having returned home from the battle field, and feeling conscious that we have discharged our duty as soldiers in the defense of our country, respectfully urge that it is the duty of Iowa to allow us the use of our votes at the polls; believing as we do and must, that he who is worthy to be trusted with the musket can and ought to be trusted with the ballot.”

Next time: Now ask the Legislature to do its duty

Top image: Detail of the flag of the 1st Iowa African regiment, conserved and displayed by the State Historical Society of Iowa. The words on its canton: "1st Colored Regt of Iowa."