Let's start with the good news:

• Assuming the governor signs the bills, district leaders know how much state funding they will receive before the April 15 deadline for certifying K-12 budgets. (That hasn't always been the case lately.)

• A longstanding inequity in school funding has been fixed--for now.

Unfortunately, both bills fall far short of what Iowa schools need, thanks to Republican choices.

In February 2017, otherwise known to Bleeding Heartland readers as the worst month ever for Iowa students and educators, Republican lawmakers approved a 1.11 percent increase in allowable growth for school budgets (sometimes called supplemental state aid). Since our current school funding system went into effect in the early 1970s, lawmakers had approved smaller percentage increases only twice before:

Governor Reynolds proposed a 1.5 percent increase in school funding for fiscal year 2019. GOP lawmakers went even lower: a 1 percent increase works out to about $32 million across the entire K-12 education system and $67 per pupil. Many districts will cut staff and/or programs, because 1 percent is insufficient to cover their rising costs.

Republicans have talking points to fall back on. I heard them again from Senate Appropriations Committee Chair Charles Schneider and House Majority Leader Chris Hagenow at the Clive Chamber of Commerce forum on February 24. They spared K-12 schools from mid-year budget cuts. They've increased public school funding by $735 million since 2011. Democratic Senator Herman Quirmbach provided a reality check during the Senate debate on an earlier version of this legislation: the inflation-adjusted increase in K-12 funding has averaged just 0.07 percent per year since 2011, “functionally no increase at all above inflation for the last eight years.” Considering only fiscal years 2018 and 2019, per-pupil funding declined by 0.5 percent each year in real terms (when adjusted for inflation).

Iowa School Finance Information Systems created this chart, which shows that on average, the cost of educating a student grows by 3.5 percent to 4 percent annually. 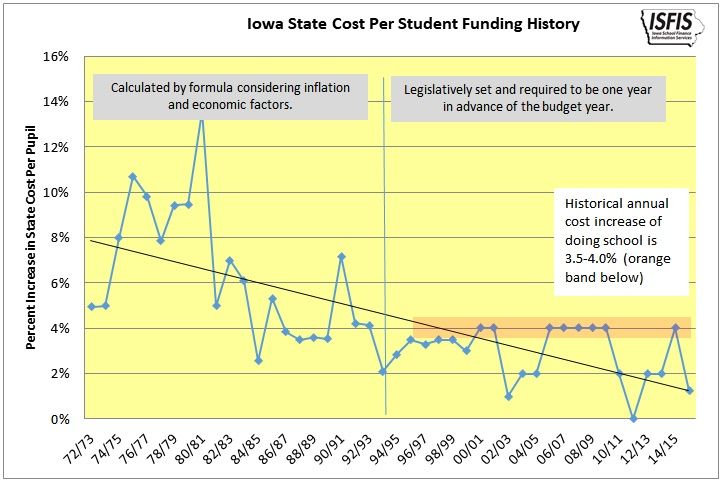 As for the $735 million in additional state funding for K-12 education, Parents for Great Iowa Schools showed in this chart that only about half of that total represented new money that could be used for classrooms and programs.

House File 2230 bounced back and forth between the chambers because in early February, Senate Republicans attached extra school transportation funding to the bill. But House Republicans refused to concur with the Senate amendment, and on February 26, senators voted to recede from their amendment, having reached a deal to include transportation funds in separate legislation. On final passage, the 1 percent increase in school funding cleared the Senate along party lines, as it had done in the House.

Also on February 26, the upper chamber gave final approval to Senate File 455. The original purpose of this bill was to resolve an inequity that has been locked into K-12 funding for four decades. Molly Duffy explained the origins here. She noted, "In 2017, a handful of school districts can spend as much as $175 more per student. Multiplied by a district’s total enrollment, that additional money quickly can become a budget boost worth thousands." The Davenport Community School District is among the most disadvantaged.

Fixing the problem should have been a no-brainer. The Iowa Senate approved a version of this bill unanimously last March. House leaders never brought the bill to the floor during the 2017 session, however.

This month, House Republicans revived the bill, with an amendment. The Quad-City Times editorial board explained on February 25,

Senate File 455 -- the so-called "school equity bill" -- wasn't a piece of legislative genius when it last year rolled out of Iowa's upper legislative chamber. It would have taken 10 years to close the fundamentally unjust $175 per-pupil gap in state aid that hamstrings some schools districts and advantages others. It was a punt, which allocated just $2.8 million -- $5 per pupil -- to that end in its first year, meaning that future Legislatures would have to bear the burden of making districts whole.

But Iowa was, and still is, a state wholly run by a GOP that's slashing services in the middle of a budget cycle and addicted to the idea of coffer-emptying cuts to personal income taxes. Last year, SF 455 merited support because, in that political moment, it was the best for which anyone -- especially Davenport Community School District -- could hope. [...]

Iowa House, this past week, finally took up SF 455, grudgingly after sitting on it for a year. And, unsurprisingly for a body that last year refused to even debate SF 455, the House further neutered the bill.

House Republicans scuttled the 10-year rollout, instead transforming the bill into a one-year $5 bump in per-pupil aid to dozens of districts, including Davenport's, where officials have screamed from the rooftops for parity. In so doing, the House version would require the Legislature to annually renew or rewrite the legislation and, over time, remain committed to a proposal that substantially ramps up spending on its back end.

The amended bill also includes more funding for districts with high transportation costs (mostly in rural areas, due to consolidation). This document shows how much extra state money each district would receive. According to Senate Democratic staff, the House amendment

Senate Democratic staff also provided this side by side comparison. The left column explains key points of the earlier version of Senate File 455. The House amendment, which will go to the governor, is on the right.

The Quad-City Times editors concluded, "Equity bill isn't good. Pass it anyway." Most Iowa lawmakers agreed. The final version of Senate File 455 cleared the House last week by 92 votes to 5. All the opponents were Democrats: Bruce Hunter, Brian Meyer, Rick Olson, and Jo Oldson of Des Moines and Cindy Winckler of Davenport. During Senate debate on February 26, Democrats unanimously opposed the motion to concur with the House amendment. But once that motion passed, the bill gained final approval by 45 votes to 4. Democrats Tony Bisignano, Matt McCoy, and Janet Petersen of Des Moines voted no, as did independent Senator David Johnson.

To sum up: public schools will receive less state money than they need for the coming academic year. K-12 districts will need to fight for transportation and per-pupil equity again next legislative session. The best thing you can say about both bills is they could have been worse. That's what passes for a good day in the Republican-controlled Iowa legislature.