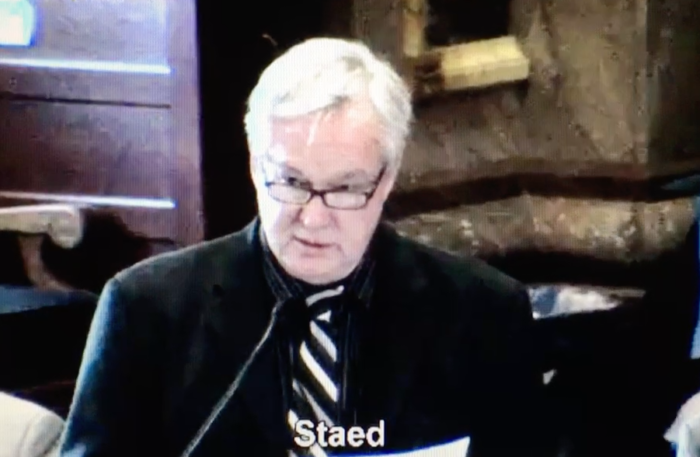 Iowa House Republicans suppressed two attempts to consider legislation that would make it easier to temporarily remove firearms from individuals who pose a danger to themselves or others because of severe mental health issues. Democratic State Representative Art Staed has vowed to keep trying to pass what he called "a vital tool" to help family members and law enforcement save lives.

Staed had filed an amendment providing for "extreme risk protection orders" to House File 2456, a broad mental health bill that leaders brought to the floor on the morning of February 27. Iowa Starting Line explained the concept as follows:

The amendment allowed for close family members, people in an intimate relationship or roommates with the person to petition a court with significant evidence that the person was in danger of using a firearm to hurt someone. A hearing would have to be held between five and fifteen days of everyone being notified of the matter, and a court would have to find a “preponderance of evidence” to issue an extreme risk protective order, which would allow a local sheriff or police officer to confiscate the weapons. The order would be temporary and could be up to a year in length.

"America is in the midst of a firearms suicide epidemic, but preventing a suicidal person's access to firearms can and has saved lives, the lives of those individuals and the lives of others," Staed explained when his amendment came up during House floor debate. Here's his four-minute speech in full:

Staed mentioned that his wife Susan's first husband took his own life with her handgun; "an extreme risk protection order may have saved his life." He cited a review of fourteen studies, which "found that household gun access triples the risk of death by suicide."

Some mentally unstable people commit homicides, and Staed recounted some incidents where family members were powerless to act before horrific mass shootings occurred. The parents of Jared Lee Loughner "had become so concerned about his erratic behavior that they took away his shotgun, but they could not take any further action to restrict his access to guns." Loughner eventually killed six people and wounded thirteen, including U.S. Representative Gabrielle Giffords, in Tucson, Arizona.

"Unfortunately, these situations are not uncommon in America. Not even uncommon in Iowa," Staed warned. "A gun violence restraining order would have provided these family members and law enforcement with a vital tool that could have saved lives." His amendment would create a way to intervene during a crisis, "before dangerous warning signs escalate into firearms suicide and homicide."

Normally, this kind of speech would end with the state lawmaker asking colleagues to support the amendment. Instead, Staed told House members, "I've received word this morning over and over that Republican leadership in the House has threatened to remove House File 2456 indefinitely unless I would agree to withdraw this extreme risk protection order amendment."

He agreed to their terms in order to show his "100 percent support" for what he considers "necessary" legislation. "But this is not the end of this legislation," he continued. "The body will see this legislation again and again until we pass a common-sense extreme risk protection order that will save lives."

Staed made good on his promise several hours later, when the House took up a bill related to online learning. Staed offered his amendment on extreme risk protection orders to an amendment offered by fellow Democrat Cindy Winckler.

Republican Matt Windschitl, the leading pro-gun voice in the House GOP caucus, rose on a point of order. Staed's amendment was not germane, Windschitl claimed, adding in a remarkable display of chutzpah that “Legislation of this magnitude deserves bi-partisan work.” Staed commented via Facebook, "If that were true, Republicans had plenty of time to work with me when the initial bill was filed weeks ago. They had plenty of opportunity to hold a sub-committee/public hearing to discuss and amend the legislation."

More to the point, Republicans have not allowed meaningful Democratic input on bills that made huge changes to laws on collective bargaining, workers' compensation, guns, reproductive health care, or the state budget.

Staed told the rest of the story.

After the amendment was ruled not germane by Speaker Upmeyer, I asked for a suspension of the House rules to consider (and vote on) the Extreme Risk Protection Order legislation. Republicans, along party-lines, defeated this attempt to bring the legislation to the floor for a vote.

Yet another maneuver of House Republicans to stop this bill today - and Iowa families still don’t have protection provided by an Extreme Risk Protection Order.

Final note: the roll call shows one House Democrat, Bruce Bearinger, voted with Republicans against suspending the rules to consider Staed's amendment. But in an explanation added to the House Journal later, Bearinger confirmed that he inadvertently voted “nay” on the amendment, when he meant to vote "aye." Occasionally lawmakers press the wrong button by accident. The electronic system does not allow them to correct the error.

The amendment wasn’t Staed’s first attempt to start a conversation around a red flag law for Iowa. On Feb. 1, Staed, Rep. Monica Kurth, D-Davenport, and Rep. Bruce Hunter, D-Des Moines, introduced House File 2180, “an act relating to the creation of an extreme risk protective order.” The bill was referred to the House Judiciary Committee and has not been touched since, although the committee met five more times before the funnel deadline, including the evening of the Parkland, Fla., school shooting.

HF 2180 was not even assigned to a subcommittee for further review.

Top image: State Representative Art Staed, delivering opening remarks on his amendment to create a gun violence restraining order for those who pose a danger to themselves or others.